A sneak preview inside the refurbished Stella cinema in Rathmines

Dublin's landmark Stella cinema in Rathmines, which originally opened in 1923 has been sympathetically restored to reflect the glamour and glitz of the 1920's. Video: Bryan O'Brien 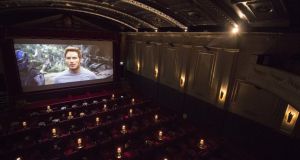 The front of the Stella cinema in Rathmines, Dublin, is today covered by wooden hoarding below and a large, billowing cloth cover above. Only by nosing around the side of it can you glimpse the fine solid grey granite beneath. I’m interrupted by Gerard and Joe, wearing hardhats, who bring me round through the side entrance, through pristine corridors by the kitchen and into a wonderland in the making.

Behind the narrow facade of the Stella, an army of people have been working for eight months to restore the cinema. The Stella first opened in 1923, has had many incarnations since, but has been mostly closed to the public for about a decade. It was put up for sale two years ago with an asking price of €1.75m and eventually bought by the Press Up Group – aka Paddy McKillen jnr and Matt Ryan – which has built up a string of pubs and restaurants over the past few years.

The mission with the Stella has been to restore it to its 1920s art deco glory, and they have done a gorgeous job on it. The restoration was aided by historical photos and research into the original cinema; the commercial project was inspired by luxury cinemas internationally.

The cinema’s 1980s facade was removed and the original – or the bits that remained of it – was uncovered. It now approximates the granite and brick of the original; a small section of the granite surround remained, and served as a guide to recreate the original 1920s facade. This is under wraps until Tuesday, but inside the door the team is proud as punch to show off the sparkle ahead of its Halloween opening.

The foyer has wooden dark grey panelling, and a white and black mosaic floor, with the S for Stella as the centrepiece, surrounded by hand-laid fan-patterned mosaics. This, and another similar floor area outside the main auditorium door, is a careful reproduction of an original floor upstairs at balcony level.

The original was designed by Higginbotham & Stafford as a single auditorium. At some stage in its existence the glorious ceiling moulding was covered by a concrete ceiling, and the cinema was divided in two.

Removing the huge concrete ceiling took months, and reinstating the balcony was a challenge, says theatre director Karl Geraghty as we tour the almost re-opened Stella.

Chatting to him, to Mark Dillon who project managed, to Gerard and Joe and others who have been on site for eight months, there is pride and delight in what they have created. Some of the original features – marble stairs, metal banistairs, some moulding – have been restored, others recreated or invented.

The Stella in the 1920s had a capacity of 1,283, making it Ireland’s largest cinema at the time. But the refurb is going for a more luxurious, spacious experience, and will have capacity of just 216 (including 66 on the balcony). The single auditorium reverts to the original style of cinema stage, framed by curtains, with new wooden panelling to match the original panelling uncovered at the top.

Where it diverts from the original is in the seating: the 2017 incarnation of the Stella has rows of deep leather armchairs and couches, with small circular snack tables, topped by lamps, beside them. In front of each seat is a leather ottoman to stretch the legs on to, and inside it a cashmere blanket for cosiness, and space to stow coats or bags.

The front row is of full-length, double bed sized loungers. It’s like vegging out at home, only at the cinema. With table service.

Ah yes, table service. Punters can order from a menu of snack dishes at the glamorous bar counter just past the foyer; the area has tables and a stunning chandelier, sourced in Italy. So there are fancy versions of standard cinema chomping fare such as popcorn and chilli hot dogs and nachos, but there’s also posh nosh small bites, including parmesan and wild mushroom risotto balls, tuna poke salad, soft tacos with BBQ Korean pork, buttermilk chicken tenders. And get this: the drinks – from beer to pop to an array of cocktails – all come in real glasses, some of them crystal. You order beforehand, for table service at the start of the film.

All this glamour and comfort doesn’t come cheap; this is a destination cinema rather than the bog standard multiplex on the corner. Standard ticket prices are €19, seniors just slightly less, and children (for weekend family films only) €8. The yummy looking food menu doesn’t have prices attached yet – they are still working out portion sizes and where to pitch it – and cocktails are €11 to €13.

Upstairs and to the side, in what was once a dance studio, is the Stella Cocktail Bar, a decadent, velvet interior with a new roof light, over bar mirror and small outdoor terrace. It’s a cave to linger in before or after a film – or can be accessed separately from the street. This would be a great space for a party (and needless to say, it is available for that very thing, as well as corporate gigs).

When the Stella came up for sale it might have been redeveloped for offices or retail in prime position in the centre of Rathmines. Instead it looks like no expense has been spared in recreating the style of its cinematic past, but with added luxury. O Donnell O Neill Design is behind the refurb, and Mark Dillon project managed. Apparently Paddy McKillen jnr took a daily interest in the project and its detail.

The refurbishment oozes skill, craftsmanship, attention to detail – and money. But no one there can or will say what the budget or final bill was. “Well, they didn’t skimp on it, that’s for sure,” is the most anyone will say.

Karl Geraghty, who has worked with Press Up for years, and before that Aiken, mostly in music, is managing it all, and enjoying learning about how to set up a cinema for a change, deal with distributors and working out the details - such as when and how fast to raise the lights, and how to get the audience to shift into the auditorium, as it’s such a sociable set-up.

The new Stella is going to show mainstream films for a general audience for the most part, and Geraghty plans to build more interesting and quirky stuff around it, in other time slots: midnight screenings, family films on weekend mornings, bruch and a movie. Stella Theatre opens to the public October 31st. The opening film will be decided by vote from the Stella’s Facebook campaign, and Geraghty plans to show the other shortlisted films over the opening weekend, and gauge audience reaction to influence future programming.