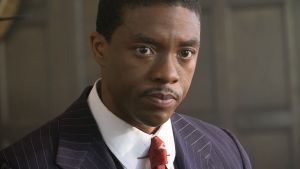 No button is left unpushed in this study of an incident from the early career of the first African-American appointed to the US supreme court. Those buttons are large enough to be visible from space. They sound like a klaxon when hammered.

Like most such buttony courtroom dramas, Marshall works an unsubtle magic upon the viewer. (We mean the sort where, when an opponent’s objection is sustained, the hero, knowing the point has been made, smirks while saying “withdrawn”.)  It’s impossible not to rejoice at the triumphs and mope at the setbacks.

Thurgood Marshall (Chadwick Boseman), legal director of the NAACP between the wars, represents a black chauffeur charged with the rape of a rich white woman (Kate Hudson) in Connecticut. Not a member of that state’s bar, he is forced to collaborate with young, inexperienced civil specialist Sam Friedman (Josh Gad). They don’t get on at first. Marshall is arrogant and bossy. Friedman, who just wants a quiet life, can’t quell his wife’s anger at this step into controversy.

Do you think they’ll end up earning each other’s respect and becoming friends? Mind that enormous button on your way to Clunky Gulch. Mrs Friedman comes around after hearing a racist remark in the synagogue. Sam gains confidence after basking in Marshall’s righteousness.

Boseman is an excellent actor, but the shifts in the buddy-buddy relationship are hampered by the film-makers’ decision to make a self-righteous bully of Marshall. We understand that, to succeed as a lawyer in those times, an African-American had to be tougher than the rest. But Boseman allows him barely an ounce of charm. Desperate to reference black culture of the day, the film makes sure to visit Minton’s in Harlem and introduce us to the poet Langston Hughes. And so on. Your shoehorn is straining.

Marshall makes an interesting contrast with Jeff Nicholls’s infinitely subtler Loving. Here we really do get the expected rednecks urging the lawyers to get out of town. Here we do have to endure the groaning courtroom cliches. It does nothing to elevate the tone when Friedman asserts his growing authority by destroying the alleged rape victim on the stand. Some compassionate tweaking would have helped here.

For all that, the film does have the desired effects on the less demanding parts of the brain. And Marshall’s story is one worth hearing.