Making the Grade: Irish documentary is one of the great, affecting films about teaching

Review: A colourful cross-section of the 30,000 Irish children who learn piano 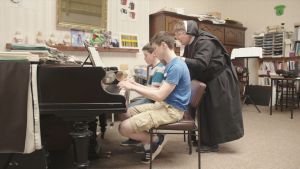 'Making the Grade' is the latest documentary from Ken Wardrop.

In 2010, Ken Wardrop’s His & Hers, in which Irish women of ascending age chatted about the men in their lives, became a sleeper hit at the Irish box-office. The Portarlington-born director’s second feature, Mom and Me, in which Oklahoma men talked about, and with, their mothers, embellished the elegant structure of his previous documentary by adding a radio talk show host as a narrator.

Making the Grade, which depicts the relationships between Irish piano students and their teachers, requires no commentary beyond the filmmaker’s charming observational footage.

The film meets and warmly greets some 51 participants – hailing from Cork, Derry, Donegal, Dublin, Galway, Kerry, Kildare, Limerick, Louth, Mayo, Meath, Offaly, Waterford and Westmeath – as they prepare for their Royal Irish Academy of Music examinations. Using that body’s grade structure, the film opens with five-year-old Harry Keegan climbing on to a stool for his first lesson, and closes with those tackling Rachmaninoff for Grade Eight.

Various teachers, including the hilarious Sr Karol O’Connor (“It’s a habit, not a costume. I’m not dressing up for fancy dress!”) nudge, tease, cajole and encourage their temporary charges toward musical proficiency and beyond.

Precocious Derry chatterbox Rosa O’Reilly learns a daunting piece over the summer and composes a poem for fond, admiring instructor, Mrs McGinley. Fax the dog threatens to steal the movie in his pursuit of a ball.

Angela Morley, an inspiring young girl with cerebral palsy, raps about her condition. Loyola Brown, a talented pianist in her youth, is returning to the instrument after many years.

For some students, piano is therapy, for others, it’s a complement to heavy metal.

Where His & Hers pointedly stuck with a narrow demographic, Making the Grade delights in the heterogeneity found in a colourful cross section of the 30,000 Irish students that receive piano tuition every year.

A diverse cast features both students and teachers with roots in Russia, Lithuania, Nigeria, Italy, and beyond. This fascinating accidental portrait of the “national character” adds another dimension to a lovely, warm film about learning.

Reserves a nice spot alongside Être et Avoir and Monsieur Lazhar as one the great, affecting films about teaching.