‘The Deer Hunter’ wasn’t all Russian roulette. What about the Russian wedding dance? 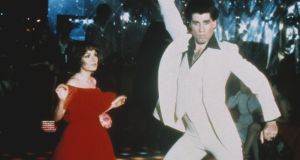 Most now associate Michael Cimino’s film with Christopher Walken pressing a gun to his temple, but it’s the Russian wedding dance, not the Russian roulette, that impresses most. That said, Walken shimmying to Can’t Take My Eyes Off You with a pool cue for a dance partner comes a close second.

Strictly Ballroom would be a more obvious choice to represent the “klutzy-pupil-shines-thanks to-hunky-instructor” category, but this celebration of mediocrity is irresistible. Tiffany (J-Law) is half-drunk before Pat (Bradley Cooper) drags her on to the competition floor, so it’s no wonder her graceful leap ends in an awkward face-hump.

George (James Stewart) and his future wife Mary (Donna Reed) are dancing the Charleston at a graduation party when everyone else comes to a standstill. The couple assume they’ve got an audience when, in fact, the mechanised gym floor is slowly opening up beneath them. They fall right into the swimming pool below, but no amount of chlorinated water can dampen the high spirits of youth.

As their high school reunion approaches, Romy (Mira Sorvino) and Michele (Lisa Kudrow) begin to worry that their snooty classmates will judge them failures. The solution? An interpretive dance routine to Cyndi Lauper’s Time After Time, obviously.

Cinema has rarely done justice to the sweaty-faced rave scene. Then Renton had a dancefloor epiphany that seemed to sum up the past, present and future of British club culture in one: “Music is changing, drugs are changing, even men and women are changing. One thousand years from now there’ll be no guys and no girls; just wankers.”

It was hyped as John Travolta’s big comeback, but his entry into “the world-famous, Jack Rabbit Slim’s twist contest!” stands on its own merits. Namely, a po-faced, bare-footin’ Mia Wallace (Uma Thurman), the threat of mobster violence hanging in the air and Quentin Tarantino’s direction at its Godard-homaging best.

Travolta pops up frequently in any movie dance list, and with good reason: the man can move. In this gritty portrait of 70s Brooklyn, he plays the strobe-lit stallion of Odyssey nightclub and spends much of the movie strutting his stuff. It’s his More Than a Woman routine that lives on, however. Technically he’s dancing with a partner, but as that blindingly white three-piece makes clear, Tony is always the prima don.

The typical movie dance-off ends in someone screaming: “See you at regionals, bitches!”, but not in the good-natured, primary-coloured cult classic House Party. When Kid ’n’ Play engage in a flirtatious dance battle everyone comes out smiling. Ain’t My Type of Hype by Full Force is the ridiculously funky new jack swing track that they get down to and, yes, you will be needing it on your next house party playlist.

This is the transporting cloud of loveliness on which Astaire and Rogers’s enduring reputation floats. The couple begin their Cheek to Cheek routine as mortal enemies and end as starry-eyed lovers, with Fred Astaire softly crooning Irving Berlin’s lyrics into Ginger Rogers’s ear throughout: “Heaven, I’m in heaven, and my heart beats so that I can hardly speak . . .” Know the feeling?

The Psychedelic Furs’ Love My Way plays at an Italian outdoor disco and Armie Hammer lets go: eyes closed, Converse shuffling side to side, fingers clicking to no discernible rhythm. It’s a purely joyful sight to behold in isolation but the context increases our joy. This is both the moment when young Elio (Timotheé Chalamet) falls for the American and when audiences fell for this sun-kissed romance. –Guardian