Dear David: is the bone-chilling online horror true or fake?

Adam Ellis’s social-media horror gets creepier with every tweet 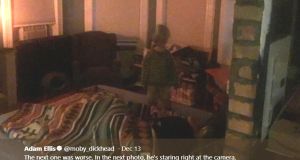 “A lot has happened in the past week” tweeted Adam Ellis on November 29th, with the studied understatement most Twitter users deploy if they’ve spent a few days reading news reports on the new iPhone.

For once, however, this description was more than accurate.

Ellis, who had found Twitter fame some months earlier with the seminal creepy Twitter series Dear David, was about to begin the largest slate of updates to his long-gestating ghost story since it was first begun.

For the uninitiated, Dear David began in August when illustrator and cartoonist Ellis (@moby_dickhead) first mentioned a series of dreams he’d been having about an odd, ghostly boy with a dented head, who must be addressed as Dear David.

Ellis came to believe this was an unhappy spirit whose malevolent intent seemed to be localised to his apartment. Over the course of three or four weeks, Ellis detailed his interactions with the entity through descriptions, images, audio files and videos, slowly building up into a retinue of bone-chilling moments.

Most Twitter horror stories involve politicians badly co-opting memes or creepy DMs from guys with Conor McGregor avatars. But this proved a rare fictional success for the form, captivating millions of readers over the course of hundreds of posts.

When last we spoke of the project, the titular phantom had been perceived and documented only by its interactions with surroundings: a moved chair here, a wispy blur there. But, as per Ellis’ more recent updates, things have kicked up a notch.

The first development came on Ellis’ trip to Japan where he discovered a strangely recognisable statue: its deformed, dented head putting him in mind of his gruesome antagonist. When he got home, he turned his attention to an odd hatch in his apartment, which he settled on being David’s entry point, and beside which he found a discarded leather shoe, and an antique marble.

So far, so good, but more heart-stopping still was Ellis’ recent foray into photo documentation, which saw him set up a camera to take pictures as he slept last week.

The slow drip of increasingly clear images of the apparition – first reclining on a chair, then approaching the bed – induce, even in the most seasoned cynic, a cold water trickle down the spine. The series then culminated in the kind of throw-your-phone-to-the-ground jump scare that movie franchises might spend $40 million to achieve.

Some tabloid responses have spent the subsequent week querying whether or not Ellis’ work is “true” or “fake”. (One wonders if they might develop less respect for cinema if they ever found out The Exorcist had a script.)

Dear David needn’t be true to be truly affecting. Might it not be better to wonder at an artist capable of dragging old horror tropes, kicking and screaming, into the 21st century?