Pierce Brosnan as Gerry Adams: the movie you need to see now

Forget ‘Star Wars’. Stay in tonight and watch the straight-to-Netflix film, ‘The Foreigner’

Pierce Brosnan and Jackie Chan star in The Foreigner, in which an ex-IRA soldier turned government representative is probed for information about a bombing. 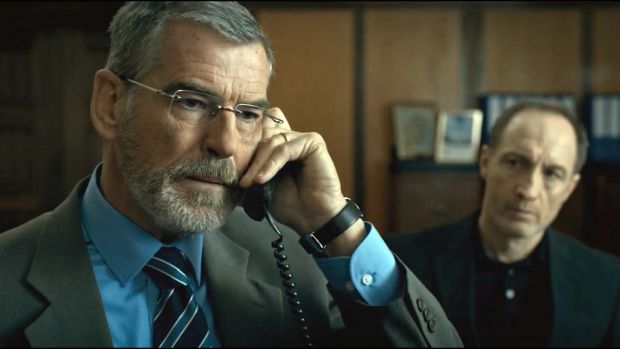 Never mind Star Wars. The film we critics have been most nagged about is that Jackie Chan thing with Pierce Brosnan as a version of Gerry Adams. When is The Foreigner coming to town?

It’s here. Martin Campbell’s action film has, in this territory, by-passed cinemas and gone straight to Netflix. For several reasons (a few of them unconnected with irony) it is the movie you most need to see tonight. The scene in which Chan beats up David Pearse and Michael McElhatton through three floors of a Belfast B&B in itself justifies your attention.

What really sets The Foreigner apart, however, is its bizarre version of the current Northern Irish settlement. It can’t even stay true to its own internal logic. At the beginning of the picture, the gruff Liam Hennessy – played by Brosnan with a Belfast accent we might just about accept from an Australian – is described as the “Irish deputy minister”.

Unless I was mishearing, sometime later the former terrorist becomes the first “first deputy minister”.

No unionist colleagues ever make an appearance. So it does seem that Liam is in charge of whatever the heck this rump parliament thinks itself to be. “You have served the British government well,” a Westminster official says at one point. Because that’s the sort of thing that the Brits say to UDI members.

Oh did I not mention the UDI? The Foreigner is based on a 1992 thriller by Stephen Leather that mentioned the IRA by name and hung itself around the Harrods bombing of 1983.

Financed largely in China, Campbell’s film weaves its story in with a mad version of the peace process and turns the Provos into … What? The Ulster Defence Initiative? The Unity Directive Instigators? We are never told. But those initials really do suggest somebody on the other side.

Anyway, the picture starts with something that no peace-loving filmgoer wants to see: a prominent action hero laughing merrily as he drives his charming daughter out for an afternoon’s shopping. Such scenes are only ever followed by catastrophe.

Sure enough, a bomb goes off and kills Jackie’s daughter. Irish terrorists are blamed. A tough, ex-special ops guy, Jackie will not settle until Hennessy names the culprits. Now a man of (relative) peace, Liam genuinely can’t say who did it, but he might still know more than he is revealing.

Space prohibits a list of all the things the film gets wrong about this island. In comparison, that recent, notorious Saturday Night Live sketch plays like a slice of documentary realism. “Have a real whiskey. Have a Jameson single malt,” somebody says at one point.

Later on, Liam’s wife (the reliably sound Orla Brady), whose brother was killed by loyalists, complains about imprisoned “UVF men taking courses in the Open University”. It would be beneath my dignity (and possibly dangerous) to suggest she means “lifting weights and watching dog racing”. So I won’t do that.

It’s Hennessy that really interests us. We know he’s not a version of Gerry Adams because, though Liam claims to have had only scanty connections with the UDI, he is later revealed to have been up to his furry neck in the violence.

Gerry, by way of contrast, was never in the IRA. So, no problems there.

Hennessy sounds as if he’s from movie Belfast, but he owns up to having once been dubbed “the Butcher of the Bogside”. Nobody would refer to Adams thus. Heck, I would refer to no Sinn Féin official thus. I want to live to see the next James Bond film.

Gerry is famously even-tempered, and at home to gentle meditation upon the trampoline. Liam bellows out stuff like: “You’re out of your fucking tree!”

Here’s the odd thing about The Foreigner. Were it not for certain decisions involving the hair and make-up department, nobody would be much worrying about the film’s sketchy relationship with the truth. We could sit back, shrug and conclude that it takes place in an alternative reality in which the peace process is at an earlier stage, the Republic only half-exists and the UVF is stuffed with budding intellectuals.

That is, after all, how we permit ourselves to enjoy the hugely different, but equally fantastic The Quiet Man.

By persuading Brosnan to wear a grey beard and unfashionable spectacles, however, they invite inevitable comparisons with Adams. That politician has never been First Minister or Deputy First Minister of the assembly. No critic would have drawn any comparison if he hadn’t been so attired. It’s probably a smart move. Would you be reading this now if they hadn’t slyly made the connection?

Here’s another odd thing about The Foreigner. All that mad Irish stuff noted, it’s actually a pretty good film. Campbell, the director of Casino Royale, knows how to handle an action sequence. Cliff Martinez’s score is terrific. Chan is always a delight to watch.

The Foreigner is about 40 minutes shorter than The Last Jedi and around three times as entertaining. Mind you, it does require greater suspension of belief.