Daniel O’Donnell: On My Culture Radar

The singer on the mural art of Kevin Gallagher, the comedy of Conal Gallen, and why he’s still enchanted by The Sound of Music 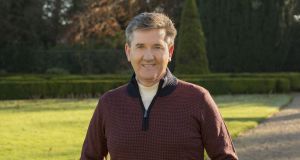 I’m reading a book by Peter Molloy, who lives in Missouri but is from Donegal. He self-published The Branson Butcher, a crime novel that centres on a murder in the Ozark Mountains. I’ve only just started it but I’m sure it’s going to be a gripping affair as he writes really well. I’m not a big reader, but Pete has given me a few of his books that I’ve read.

Here in Donegal, we visit Danny Minnies for a posh night out. It’s upmarket and there’s a lovely ambience. They do dishes like beef and fish, but with a nice flair; it’s about quality rather than quantity. We’re lucky that it’s local to us.

I love Conal Gallen, the Donegal comedian. I’ve seen him live lots of times and he has a good Irish humour. Sometimes I find today’s humour complicated and smart, but Conal’s is clear. You laugh as soon as you see him coming onstage.

The last theatre show I saw was Tina in October. I thought it was exceptional. Both in her personal and professional life, her story is an amazing triumph. The songs were excellent too. I’ve never been able to see Tina in concert but Nkeki Obi-Melekwe, who played the lead role, was a wonderful alternative.

In Donegal, Kevin Gallagher is an artist who has painted murals around our town that relate to a place or a time. They’re very lifelike. I was introduced to him yesterday, and I told him I’d been meaning to write and say how much I loved what he’s doing. We have a big, two-storey gable at our house so we thought it would be nice for him to paint something there. Hopefully that will happen.

My favourite singer is Loretta Lynn, and if I’m in a mood to really listen to music, I’ll put on one of her greatest hits albums, with the old classics. I love the stories and the rawness. You believe everything she says, especially as she’s lived through most of what she sings about.

No matter where I go, it’s hard to beat Dublin. Grafton Street at Christmas time is magical. The centre is walkable, and there’s so much history as you walk – you’ve got Trinity College across the street from the old bank, and the different bridges further on. And there’s such a lovely atmosphere walking around O’Connell Street, Henry Street and Mary Street.

I thought Renée Zellweger did an amazing job in the title role in Judy. I watched it recently and I tried to find Renée in it, but I couldn’t see her. I also love Maggie Smith, especially in Downton Abbey. She delivers her lines so originally, you’d never realise they were given to her in a script.

I love quiz shows, especially The Chase. The chasers like Anne Hegerty are great, but Bradley Walsh is fantastic. You’re supposed to be gripped by the show, but I constantly find myself laughing at him, and how he interacts with the contestants. It’s so much fun.

My favourite film of all time is The Sound of Music. That goes all the way back to my childhood; I must have been about seven when I first saw it. Every time it comes on at Christmas, I still watch it. I could recite it. Julie Andrews is the most amazing singer, but my favourite part is when Mother Abbess sings Climb Ev’ry Mountain. Celine Byrne played that part when the musical was on in Dublin a few years ago, and she was super too.