A preview of Saturday’s books pages 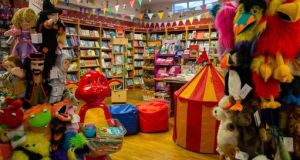 Philip’s Book Shop in Mallow, Co Cork, was started in 1989 by husband and wife Philip and Catherine O’Flynn

Philip’s Book Shop in Mallow, Co Cork, started in 1989 by husband and wife Philip and Catherine O’Flynn , is this year’s Ireland section winner of the Independent Bookshop of the Year competition, part of the British Book Awards or Nibbies. The overall winner will receive £5,000 to be invested in the day-to-day running of the shop, to be announced at the awards ceremony on June 29th in London. Also shortlisted were two previous winners, Blessington Book Shop and Woodbine Books in Kilcullen.

The Lilliput Press emerged victorious in the Ireland section of the Small Press of the Year category, whose shortlist had incuded Tramp Press, Wordwell Group, New Island Books and Monkey Blue Press.

Cúirt International Festival of Literature is proceeding as planned next month in Galway city. It has issued a reading list for keen readers featuring authors taking part in this year’s festival, which can be ordered from festival sponsor Charlie Byrne’s Bookshop on Middle Street in Galway, over the phone or by email – ring 091-561766 or email info@charliebyrne.ie

Coming up in Ticket this Saturday in The Irish Times, Tayari Jones, last year’s winner of the Women’s Prize for Fiction for An American Marriage, talks to Catherine Conroy about her new novel, Silver Sparrow. Historian Roy Foster has written a fascinating and entertaining essay about WB Yeats’s passion for Thoor Ballylee in Co Galway, the first home he ever owned and the inspiration for some of his finest works. In the Magazine, Hilary Fannin talks to Róisín Ingle about her superb debut novel, The Weight of Love. In Weekend Review, Turtle Bunbury writes about the Romans’ profound influence on Ireland in an exclusive extract from his new book, Ireland’s Forgotten Past.

Reviews include Johnny Rogan on The Kinks: Songs of the Semi-Detached by Mark Doyle; Susan Cahill on A Thousand Moons by Sebastian Barry; John Banville on Brian Greene’s Until the End of Time: Mind, Matter and Our Search for Meaning in an Evolving Universe; Barry Pierce The Discomfort of the Evening by Marieke Lucas Rijneveld; John O’Donnell on Rory Best: My Autobiography; Helen Cullen on The Weight of Love by Hilary Fannin; Catherine Toal on Modern Times by Cathy Sweeney; Paul Clements on the best new local history; Declan Hughes on the best new crime fiction, including Liz Nugent, Brian McGilloway and Henrietta McKervey; and Sarah Gilmartin on A Quiet Tide by Marianne Lee.

This Saturday’s Irish Times Eason offer is The Doll Factory by Elizabeth Macneal. When you buy the newspaper at any branch, you can purchase a copy of the page-turning thriller for just €4.99, a saving of €7. Anna Carey, reviewing it in The Irish Times, wrote: “Emotionally and intellectually engaging, Elizabeth Macneal’s debut is a stunner”.