Children from all backgrounds could benefit from music, drama and art in every school 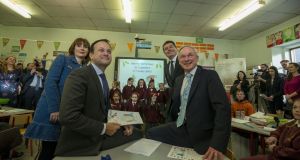 In December 2017, I found myself in a crowded classroom in St Laurence O’Toole Girls National School on Seville Place, Dublin, where the first- and second-class students had been joined by Leo Varadkar, Paschal Donohoe, Richard Bruton and Josepha Madigan, along with assorted media handlers, journalists and hangers-on.

We were there for the launch of Creative Youth, which sounds like a 1980s reggae covers band but is in fact the Government plan to give every child in Ireland “access to tuition, experience and participation in music, drama, art and coding” by 2022. It would have been easy to be cynical about the event, which seemed to have been constructed largely for the benefit of the Government’s own video crew. But even cynics would have to acknowledge that there has been significant movement in recent years, albeit from a low base, in this important area.

Inevitably, you have to fight your way through the jargon to discern what’s going on. Creative Youth is one of five “pillars” of Creative Ireland, the overarching cultural strategy launched with some fanfare three years ago by John Concannon and now continuing in a somewhat more low-key fashion under Concannon’s successor, Tania Banotti. While some of the other pillars seem to be slow in bearing fruit (there’s little sign yet of the promised new dynamism in long-form TV drama, for instance), there does appear to be improving access to creative expression for children and young people.

As part of Creative Youth,150 schools around the country engaged last year with Creative Schools , which aims to integrate all forms of creative activity and collaboration into day-to-day school life, while there are also a number of “bespoke” outreach initiatives targeted at marginalised or excluded young people. In another part of the forest, today’s annual Cruinniú na nÓg will offer more than 700 free events around the country for those under 18, and a rally held in central Dublin yesterday as part of The Ark’s Festival of Children offered children the chance to say what they wanted done. The multiplicity of activities can be confusing, but it’s heartening all the same.

Access to culture for the young also features in No Child 2020, the initiative launched earlier this year by The Irish Times. It points to a 2016 ESRI/Arts Council report that found, to no one’s surprise, that children and young people from disadvantaged backgrounds are less likely to participate in arts and cultural activities than children from more affluent families. No Child 2020 proposes providing a “culture card” for all under-18s, or their parents, to access an arts or cultural experience in venues across the State.

That idea has been tried in different forms elsewhere. In France, an app for admission to cultural venues is being piloted in some parts of the country. The app is available to everyone, but eligible 18-year-olds will receive €500 credit on top. There has been some debate about what activities should or shouldn’t be covered, with the inevitable argument over high vs low culture, or whether users should be allowed to spend the money on blockbuster movies and video games. When a similar scheme ran in Italy, there were reports of recipients auctioning off their passes to the highest bidder on social media, and of retailers exchanging culture credits for tablets, laptops and games consoles while ringing up the sales as art books.

A culture pass in Ireland would presumably face the same challenges. It would also, effectively, provide a subsidy for the venues and activities on which the money was spent – not necessarily a bad thing. But whether such a crude instrument is the best way to provide greater access to cultural activity is questionable.

In a country where access to culture and to the tools of creative expression is too often determined by status and privilege, and where the primary and secondary education system is finally starting to address those shortfalls, it would be better to focus on getting music, drama, writing and art into every school and community in the country, and on succeeding in achieving stated objectives such as offering every child the opportunity to learn to play a musical instrument.

The Creative Ireland initiative isn’t perfect. At its outset it looked too often like a PR exercise for the Government. It still occasionally seems at risk of collapsing under the weight of its own platitudes. But if more resources are to be spent in this area, they should go there rather than to a culture pass.