New this weekend: Diego Maradona, We the Animals 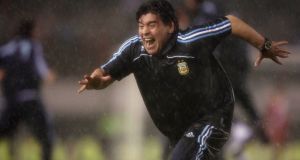 DIEGO MARADONA ★★★★☆
Directed by Asif Kapadia. Featuring Diego Maradona
Hugely impressive documentary on the legendary footballer from the man who brought us Senna and Amy. As in those films, the images are all drawn from archival footage – the football often filmed muddily at pitch level – with sparse fresh interviews rendered only as audio. Taking Maradona’s time at SSC Napoli as its spine, the picture passes in a dizzying rush that (appropriately, considering the subject) showcases Kapadia’s most stylish edits to date. Essential stuff. 15A cert, lim release, 130 min DC

For most of this impressionist coming-of-age about three biracial brothers and their dysfunctional parents, the siblings might as well be a single wild polycephalic organism growing up, largely unsupervised, in forested isolation. Jonah (Rosado), is the youngest and most individual, an individualism rooted in a growing awareness of his sexuality and the drawings and writings that he keeps in the springs of his bed. Based on an acclaimed novel by Justin Torres, We the Animals is so beautifully made that it feels a bit churlish to criticise its none-more-indie devices: the magic hour photography, dreamy post-Mallick voiceover, cavorting semi-feral children, 16mm presentation and scrappy animations can feel like the Greatest Hits of Sundance distilled into one woozy, hypnotic presentation. Club, QFT, Belfast; IFI, Dublin, 94 min TB

A successful remake of Lelio’s Chilean film concerning a divorcee coping indifferently with bad family and worse boyfriends. Gloria still exhibits more tolerance than most of her associates deserve. She still enjoys dancing and singing along to the power-pop ballads of her young adulthood. Her eventual meltdown is less a fist-in-the-air moment than a quiet-smile-of-satisfaction moment. Moore’s celebrity perhaps gets in the way, but this is still a very satisfactory transfer. 15A cert, QFT, Belfast; IFI/Light House, Dublin, 102 min DC Full review

Butler’s follow-up to Handsome Devil concerns the unusual relationship between a depressed Anglo weatherman and the Spanish-speaking worker he hires to paint a damned spot on his patio. The film dabbles in dangerous territory – it could easily have been patronising – but the director’s script and the two leads keep it aloft. The interplay is lively throughout. We end up with a small film that answers most of its own questions satisfactorily. 15A cert, lim release, 99 min DC Full review

A young woman is scarred by an acid attack in this London-set Irish coproduction from Dutch director Polak. Jade (Knight) is discharged from hospital and returns to her mum’s flat, where her appearance causes her daughter to scream. Later Jade recounts a time when her daughter called her a monster during a hospital visit. “But it’s a nice monster,” Jade’s mum explained. Jade takes refuge in partying but finds it impossible to settle back into her old life. Craving invisibility, she wears a burqa. Craving intimacy, she takes to porn sites for dimly lit online sexual encounters. Newcomer Vicky Knight gives a terrific performance that is as complex as her sometimes maddening, frequently stupid but always sympathetic character. Club, Light House, Dublin, 104 min TB Full review

Nemes reunites with Son of Saul co-writer Clara Royer for this sumptuous account of the last days of the Austro-Hungarian empire. In 1913 Budapest, Írisz (Jakab) makes her way to the ritzy hat shop that still bears her family name. Her name immediately startles all those who hear it. Her parents perished in a fire on the site of the shop when Irisz was still an infant. There are rumours that she may have a brother, who may have started the blaze and who may have viciously murdered a count. Characters shift disconcertingly from benevolent to inscrutable to downright menacing from scene to scene. There are odd, archaic rituals with occultish undertones. A strange coda set in the trenches suggests that Sunset is a parable about class struggle, but the deliciously enigmatic screenplay lends itself to multiple readings. 15A cert, IFI, Dublin (Sat/Tues/Thurs only), 142 min TB Full review

Other ★★★★★ and ★★★★☆ films out and about: Amazing Grace, Birds of Passage, Booksmart, Eighth Grade, John Wick: Chapter 3 – Parabellum, Rocketman, Thunder Road. All current synopses can be found here

The Golden Age review: A tough, intelligent story of displacement
5