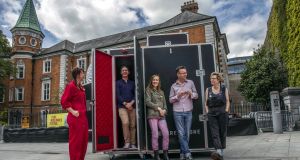 It’s dim, dressingroom lights surround the frame, and the aesthetic is theatrical red velvet. I’m alone in the single seat, hands on armrests. A screen slides sideways to reveal an actor, Frank Blake, about 2ft away, meeting and holding my gaze. He starts to speak, soul to soul.

If live theatre is an intimate artform, this is like theatre distilled to its purest, most intense version, then injected directly into the vein. This is five minutes of Theatre For One – for one audient, by one actor. And there is no place to hide.

There’s also no booking, and no ticket price; you just queue up outside and wait your turn. All through the first day on Tuesday a steady line awaited their shot of intensity.

There are many ways to skin a story, and this year’s Cork Midsummer Festival has an eclectic bunch of transmission methods for its stories, as seen in a representative slice of the Midsummer cake this week.

After Enda Walsh’s five-minute play Cave – about childhood fears, and by times intriguing and threatening – I lurch from the miniature performance booth, startled, into sunlight and the busy plaza outside Cork Opera House.

Anne Clarke’s Landmark Theatre brought the concept of Theatre For One across the Atlantic, with Broadway designer Christine Jones designing the “venue” in the style of flight cases, and inspired by research on items as diverse as confession boxes and peepshow booths. With the support of the festival and Cork Opera House, Clarke commissioned some top theatre writers – Marina Carr, Stacey Gregg, Emmet Kirwan, Louise Lowe, Mark O’Rowe, Enda Walsh – to each write a five-minute play for one actor; the list of performers involved is also a rollcall: Seán McGinley, Kathy Rose O’Brien, Kate Gilmore, Eileen Walsh, Derbhle Crotty, Frank Blake.

And more stories. “Are you listening, to me?” she calls – to him, or into the abyss, from the side of a mountain outside the city (or moreso, the side of a hill on the way to the old Cork Waterworks, where this play is being performed). Pauline McLynn’s character calls out, not knowing whether Peter Gowen’s character is there, or alive. They sit aloft, enthroned on opposite sides of the performance area, strongly lit in the late night darkness, the gushing of the Lee audible behind us, as they perform Enda Walsh’s 2005 play The Small Things. Corcadorca’s audiences come prepared, with blankets and woolly hats, for the site-responsive Cork company’s production, which creates a piece of dystopian and brutal magic that is both horrifying and humorous.

There are hints of Beckett in the set up, and touches of Murphy in the telling of a surreal and malevolent tale about a village that violently enforced silence, and a childhood scarred by an obsession with order, routine and timetables. It’s a love story of sorts too, with nuanced performances from McLynn and Gowen as broken, ageing characters retracing the tenderness of a childhood relationship amid horror.

In a talk the next day at the festival, director Pat Kiernan and Walsh discuss the play, and also how Corcadorca has mapped Cork city with stories for 27 years in its site-responsive work. What started as a practical solution to having no money to hire venues became intrinsic to the company’s identity and took on a life of its own, so that “you begin to see the city in that way”, comments Walsh, who extols the joys of watching stories unfold in the pouring rain, as you get “soaked to your underpants”. The weather had held firm this time, and in the warm, easy discussion there was a real sense from the audience that the company gives Corkonians a sense of ownership and rootedness.

More dark fairytales feature in A Different Wolf, from Junk Ensemble and Belfast music-theatre company Dumbworld, and featuring dancers, actors, musicians, singers and choirs from Cork School of Music and Cór Geal. The ensemble melds dance and song to explore fear, mythic and real. With a set populated by chilling rows of institutional beds, the atmospheric and evocative presentation is haunted by wolves (some in sheep’s clothing), a girl in red, forests, aggression and assault.

Another story, another intimacy, is shared through headphones and individual mobile phones, as a live-action piece unfolds through the audience in the cafe at the Kino. Britain’s Dante or Die makes smart use of technology in the piece, titled User Not Found, so that the medium is in tune with the message – the grief of rejection and of death and the dilemma of how to deal with an online legacy, the digital assets, of an ex-lover who has died.

The sun came out often for Midsummer this week, and Cork was glorious, all hills and water and gorgeous views (as well as multiple roadworks).

This is Lorraine Maye’s second time as director of the festival after several years managing it, and the ambitious, accomplished 11-day programme shows a Lazarus-like growth following years of severe contraction since 2013, because of a €250,000 deficit.

It’s quite the turnaround, Maye acknowledges. She puts it down to “a brilliant, supportive, passionate board”, which was led by Jane Anne Rothwell until her premature death last year. The city – cultural organisations, businesses and council – value the festival, says Maye. With a remit to platform Irish artists, particularly those from Cork, her approach is collaborative and allows riskier work that might not play in the city at other times.

In terms of those collaborations, Cork Opera House chief executive Eibhlín Gleeson mentions the theatre’s site-specific opera The Stalls, and its co-commission with Carnegie Hall of a new Donnacha Dennehy composition for the So Percussion ensemble, which had its European premiere this week. “In festival mode audiences are happy to take a risk,” she says.

Midsummer expects about 80,000 people, mostly from Cork, to attend festival events this year. “The best arts festivals reflect and are rooted in the places and people that own them,” says Maye. “There’s a momentum and heart to that that audiences from elsewhere are drawn to.” This year’s higher-profile Cork shows include the new musical Evening Train, based on Mick Flannery’s album, and Ray Scannell’s Bluffer’s Guide to Suburbia.

Another distinction of Midsummer is its socially engaged participative work, and storytelling of a jollier flavour figures in the festival through sociable breaking of bread at La Cocina Pública. Chilean company Teatro Container arrived in town a couple of weeks ago to work with South Parish residents sharing recipes and food stories, and to fit out a container as a mobile kitchen, with all recycled objects and busy clutter. It culminated in casual dining and story evenings outside St John’s Central College on Sawmill Street.

On Monday we dined on long trestle tables as the sun set, eating ensalada chilena, bacon and cabbage, and Chilean biscuits. We wrote food memories and shared favourite recipes in “passports” salvaged from an evocative earlier performance. In an open mic, the Chileans and the Corkonians told stories and sang. The local flavour ranged from a young fella’s spirited Shotgun, to acapella heavy metal, to be-chained Cllr Kieran McCarthy’s magnificent Oh, What a Beautiful Mornin’, to a recitation of Yeats’s When You Are Old. This week’s La Cocina Pública will explore new Irish cooking, recovered food, and, delightfully, “holy fish”. A gorgeous, warm, open-hearted, storyful evening, and fabulous festival fare.

Cork Midsummer Festival runs until June 23rd, with the weekend including the Carnival of Science, and the Crosstown Drift literary crawl. corkmidsummer.com

Death, misery and mud: the Irish debacle at Langemarck
9

Robert Eggers on bringing Robert Pattinson to The Lighthouse
10