Season 14 of Channel 4's hit TV show The Supervet, starring Laois vet Noel Fitzpatrick, kicks off with Barney the puggle being reunited with his family after leg surgery. Video: Channel 4 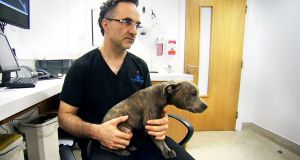 Supervet Noel Fitzpatrick. ‘I want to fix you,’ say those Laois eyes. ‘I want to put splints on your limbs and give you lovely drugs and wrap you in a fluffy blue blanket.’

If you type “Supervet Noel Fitzpatrick” into Google image search you will be inundated by photos of the eponymous fur-physician cradling dogs and cats and penguins in his strong arms while staring intensely at you with his sad dark eyes.

Those are Laois eyes, designed to go with his still intact Laois accent and his solidly Laois name (You’re only legally allowed to call yourself “Noel Fitzpatrick” if you’ve considered setting up a small garage in the midlands). “I want to fix you,” say those Laois eyes. “I want to put splints on your limbs and give you lovely drugs and wrap you in a fluffy blue blanket.”

Oh yes! These images of Supervet remind me a little of those Athena posters from the 1980s like “tennis lady scratching bottom” or “muscular hunk holding baby” except Noel Fitzpatrick is a real vet and I’m pretty sure “muscular hunk” wasn’t really the father of that baby (it’s probably not even a real baby) and I’m also pretty sure “tennis lady scratching bottom” wasn’t a real tennis pro (it’s probably not even her real bottom).

If we at The Irish Times had paid more attention to the popularity of Supervet, I suspect we might have made a better fist of predicting Brexit and Trump

Anyway, Supervet came back this week for a 14th season (Weds, Channel 4) to do some more veterinary surgery for the cameras. In an age of uncertainty, there are few things more reassuring. Though, when you think about it, it’s a little baffling too. I mean, who knew that there was an audience of people who both liked seeing cute and cuddly animals and liked to watch a Laois man perform gruesome operations on those animals? (I mean, outside of Laois; I know in Laois that’s all anyone wants to do).

If we at The Irish Times had paid more attention to the popularity of Supervet and what this says about the human condition, I suspect we might have made a better fist of predicting Brexit and Trump and whatever else has happened by the time this paper goes to print.

All the ingredients in the new series are reassuringly the same. In this week’s episode, for example, a distraught couple arrive into the clinic with a puggle, Barney, who has been hit by a bus. They’ve bigger problems than this, though. “He’s our third child,” says the lady of the puggle.

Noel Fitzpatrick has seen it all and so is unfazed. He does not sit back in shock and say: “You. Gave. Birth. To. A. Small. Dog.” Instead he promises to heal her grotesque fur-child and then heads back to the surgery to poke around in Barney’s wounds and to say things like “the blood supply remains intact”.

“One of my favourite things,” says my wife, “is when big strong men start to cry over their dogs.”

Within minutes a big strong man starts to cry over his dog and my wife wipes a tear from her own eye. “See,” she says. “Look at him there, crying.”

Then two middle-aged sisters bring in their basset hound, Albert. Albert’s back legs have collapsed and the duo are pretty sure that he looks sad. Noel Fitzpatrick is too kind to say, “Of course he looks sad, he’s a basset hound. They have been bred for generations by meddling sadists in order to look as sad as possible. They are the olden-days version of the cryface emoji.” Instead he does what he always does. He speaks softly and kindly and starts cutting and drilling. Like all Laois men, he is a man of action.

During the ad break I remember that Supervet is quite possibly the subject of Britney Spears’s pop song Toxic. I’m not joking. This song was co-written by former pop star Cathy Dennis who once dated Supervet and broke up with him in 2003, the same year the song was composed. I know! Yes, the Laois Lothario goes deeper into the culture than we hitherto thought. What else could be true? Did Rod Hull and Emu inspire Beyonce’s Crazy in Love? Was Dermot Bannon the spur that caused Justin Timberlake to Bring Sexy Back?

As a pop culture journalist I feel obliged to say, “Probably.”

But it raises troubling questions too. Is a kiss from Fitzpatrick’s lips truly as “toxic”, as Britney claimed? I imagine it’s some form of misunderstanding and that Cathy Dennis had been heedlessly mucking around with some of the medicines Noel was using to cure sick kittens. If so, that was deeply irresponsible and not Supervet’s fault. “That’s on you, Dennis,” I conclude. “Stop spreading these vile slurs, Spears!” I add.

After the break Fitzpatrick considers the broken shoulderbone of a one-year-old dog called Gylly and suggests a full experimental shoulder replacement. He can’t recommend an operation, he says, but he’s clearly gagging to operate, his scalpel hand twitching. As usual, he operates and everything works out just fine.

By the end of the show we’re watching several happy dogs wandering the glades and fens of Great Britain, including Albert who still looks sad because he is, I hate to remind you, a canine cryface-emoji. I’m pretty sure that there’s a dark and depressing outtakes show you could get from Supervet that focuses more on the futility of loving in a universe where everything dies (Albert knows what I’m talking about). But not today. Today the Supervet has looked into the face of death and laughed.

As the credits role my wife gets philosophical. “Would you let the Supervet perform an operation on you?” she asks. “If we were in some sort of post-apocalyptic dystopia and all the people doctors were gone.” (Note her use of the word “if”; she’s such an optimist).

“I would too. He’s very good at operations.” She thinks for a minute. “Would you let Supervet perform an operation on you just to avoid a HSE waiting list?”

She nods, appreciatively. “Me too.”

There’s probably a spinoff show to be made – Super-Unlicensed-People-Doctor, or something. The reality is that there are times I’d let Noel Fitzpatrick treat me purely because I’m a little bored. Indeed, I often imagine myself with an upside-down lampshade around my head, wrapped in a blanket and being cared for in his sunlit rural clinic. You wouldn’t get it on the best VHI insurance plan, really.

Unthinkable: How can scientists disagree on basic ‘facts’?
10