Can women ever get a fair deal under capitalism?

Unthinkable: Gender equality is a win-win for all, says economist Vicky Pryce 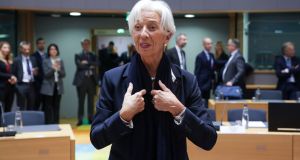 A cause for celebration?

Economist and equality campaigner Vicky Pryce issues a cautious welcome, but she looks forward to the day when such appointments are no longer novel. In these two instances, she points out, “the EU ended up going to the second-tier candidates, both women, after EU leaders failed to agree on their respective first-choice candidates, who were men.”

Citing the “glass cliff” phenomenon – the appointment of women to roles in which they are destined to fail – Pryce says Lagarde and von der Leyen “are certainly set for a hard time, given that neither is perfectly suited to the very difficult job they have been asked to do” at a critical moment for the EU. “Might this undesirability of a potentially thankless task have had something to do with their appointment?”

The Greek-born academic and author has first-hand knowledge of gender imbalance having worked in senior posts in private finance and UK government sectors. And, in Women vs Capitalism: Why We Can’t Have It All in a Free Market Economy (Hurst), she has written a powerful manifesto for our times, relentlessly piling up the evidence that women get a raw deal in the economy.

Her recommendations are not surprising: more flexibility in the workplace, tackle unconscious bias, and introduce gender quotas. But the real force of her book is to nail the lie that free markets can fix the problem.

Addressing those who are routinely undervalued or discriminated against, Pryce – this week’s Unthinkable guest – says: “Capitalism simply won’t save us.”

Why do so few central banks have women governors?
“The financial sector has been traditionally a very male-dominated environment; central banks very much reflect this. Although things are improving, looking globally, only 14 out of 173 central banks were headed by a woman in 2019, and some 20 per cent of them had no women at all on their boards. Among sovereign funds only some 10 per cent were run by women.

“Even if there are women candidates, their uniqueness in a way makes it harder for those making the hiring or appointment decision to risk hiring people who are different to them, and so they go for the lazy option of choosing someone after their own image.”

You describe gender inequality as a “market failure”, suggesting we need to “fix” the capitalist system rather than overthrow it. But if we’re sticking with capitalism don’t we have to accept some degree of structural unfairness?
“There is structural unfairness in every system. But the capitalist system does not price in environmental costs of production, for example, and the government has to step in.

“Similarly, the system cannot price in the harm to productivity and the economy of leaving women in positions which under-use their skills or having them move to part-time in low-productivity sectors where they get ghettoised. Or where they do the bulk of unpaid work outside their job, which is the case all around the world.”

British politics has taken on a very macho flavour in recent times. Was Theresa May a classic victim of the “glass cliff”?
“It was great to have a woman prime minister, as one can show all aspirants and young women that it can be done. Of course, she was the second one after Thatcher but it was good to show that a woman can have the potential to rise to such positions. And we need more role models.

“However, it was an impossible job given Brexit and all men in the end peeled away, leaving her to handle it but without actively supporting her – in fact, if anything, frustrating her all the way. And so it proved to be.

“In my view it was indeed the classic ‘glass cliff’ job. And unfortunately, because of the high-profile failure, it leaves the impression that women can’t really take the strain or deliver, and perpetuates and reinforces the stereotypes or biases that exist.”

How does gender equality benefit men?
“There is a perception that there are only a limited number of jobs and that allowing women to compete for them on equal terms with the men would mean men lose out. This is called in economics ‘the lump of labour fallacy’ – in other words, it assumes that the ‘cake’ does not expand. But of course it does.

“To achieve gender equality, though, will require a mindset change – more flexible working for all, more subsidised childcare – which should benefit men too.

“And if we believe the business literature, it will also lead to better-run companies that will benefit from greater diversity in decision-making – and hence greater profitability, more investment, more jobs, and so on. Win-win for all.”

Question: Should liberals ever engage in social media pile-ons?

Rosa Luxemburg replies: “Freedom is always and exclusively freedom for the one who thinks differently.”