Plus new books on children who changed the world, the art of protest and time zone travel tales 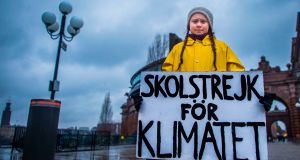 Swedish climate activist Greta Thunberg holds a placard reading ‘School strike for the climate’ during a protest against climate change outside the Swedish parliament in November 2018. Photograph: Hanna Franzen/AFP/Getty Images

“You are never too small to make a difference.” This is what Greta Thunberg has been persuading her peers having taken her campaign for climate change across the world. In Greta’s Story: The Schoolgirl who went on Strike to Save the World by Valentina Camerini (Simon and Schuster, £6.99, 8+), those inspired by the tenacious teenager can learn more about her life and how her tiny gesture sparked a global movement, bringing international attention to the future of the planet. Camerini places Greta’s actions in the context of her homeland, Sweden, adding enough detail and colour to her descriptions to be educational without patronising young readers, while translator Moreno Giovannoni ensures the language is always accessible. Veronica Caratello’s comic-book style sketches and graphic design provides provocative visual imagery, including protest signs that complements the text, while a What Can We Do? section offers practical tips for young readers to get involved and make a difference.

One concrete action young people might consider is to join the Fridays for Future Movement and take to the streets to protest themselves. Jo Rippon’s Rise Up! The Art of Protest (Palazzo, £12.99, 10+) provides a graphic history of the protest movement, from hand-printed posters to letterpress design to current social media campaigns. Rippon organises her history across six key areas, providing social and visual context for international campaigns about women and children’s rights, racism, gender and sexuality, war and peace, and the environment. Using effectively contrasting styles, from the art nouveau images of the early 20th century to the photographic frankness of the new millennium, Rippon’s book explores how image and text can combine to communicate with immense emotional power.

Marcia Williams’s Children who Changed the World (Walker, £12.99, 6+) serves as a detailed graphic history of the children’s rights movement and the role that children have played as activists in agitating for a greater awareness of their needs and care. Among them are Syrian boy Mohamad Al Jounde and Haitian girl Francia Simon who helped fellow refugees gain the right to an education in their new homes; American teenager Emily-Anne Rigal who harnessed the power of YouTube to spread her anti-bullying message; and South African wheelchair-user Michaela Mycroft, who campaigned for disability rights and services and became the first woman without the full use of her arms and legs to climb Mount Kilimanjaro. Williams’s engaging graphic style is full of visual and verbal humour that reluctant readers in particular will enjoy. This is a great book for extending curricular concerns outside the classroom.

Sarah Webb’s Dare to Dream: Irish People Who Took on the World (And Won!) (O’Brien, 5+, €16.99) offers some similarly incredible true-life stories. Across 30 chapters, she offers concise one-page biographies of well-known and lesser-known figures from all walks of Irish history and contemporary life, from revolutionaries like Pádraig Pearse and Elizabeth O’Farrell to rock-stars like Bono and Hozier. However, it is the lesser-known stories - like that of American Civil War soldier Albert DJ Cashier and adventurer Madam Dragonfly - that really sing. Graham Corcoran’s chiselled portraits dominate suggestive background landscapes, which use a few key details to support Webb’s pithy prose.

In A Postcard to Ollis (Wacky Bee, 8+, £6.99), Ingunn Thon uses a fictional framework to evoke the spirit of some remarkable Norwegian women. The heroine, Ollis, takes her acrostic name from five inspirational women, including artist Oda Krohg, journalist Lise Lindbaek, surgeon Louise Isachsen, priest Ingrid Bjerkas, and queen of Norway, Sonja Haraldsen. Ollis herself is a spirited young inventor struggling to find a place in her newly-blended family. When she embarks upon an expedition into the woods with her fearless friend Gro, she finds herself drawn to her own personal history: who is the man she calls Borgepa? Thon embellishes authentic experiences of childhood with quirky details, and Nora Brech’s exaggerated illustrations enrich the gently humorous text. The historical suggestions are expanded in a very brief afterword that should inspire extra-textual interest, but A Postcard Ollis works just as well as a stand alone adventure.

The past and present collide more clearly in fictional form in Megan Wynne’s debut The House on Hawthorn Road (O’Brien, 8+ £8.99), which is just the kind of book that its’ protagonist Beth would love – “an up-to-date novel about a girl having a horrible time at a new school” – while also offering readers something else: a time-travelling, mind-bending domestic fantasy. Beth has moved to Ireland after the death of her grandmother. School is awful, but perhaps not as bad as the new house which Beth is convinced is haunted. The poltergeist, however, is more than a generic ghost: he is a former resident of Hawthorn Road. As Beth finds herself falling in and out of the 1950s, her grief for her grandmother and her quest for belonging in her new home find an unusual outlet. Family conflict and peer pressure are represented realistically, but it is the historical slippage that makes The House on Hawthorn Road a truly compelling read.

A young girl also travels between time zones in Sally Gardner’s Invisible in a Bright Light (Zephyr, 8+, £10.99). The novel is set in a Victorian opera house, where Celeste works as a “theatre rat”, assisting behind the scenes. However, Gardner plunges us straight into an alternative version of this world - “the gutter of time. A world full of endless possibilities” - where Celeste is unwittingly recruited to play a game called The Reckoning, and where her own past, indeed, her own identity, starts to slip away. The world of the theatre creates a memorably dramatic setting for this strange tale and Gardner’s evocative prose enhances it with detail. The sophisticated lyricism of the writing demands the attention of stronger, rather than struggling, readers. However, those that persist will be duly rewarded with a spectacular and gripping finale.