Writing memoir ‘up there’ with Phil Coulter’s ‘many professional challenges’ 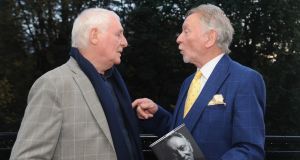 Phil Coulter at the launch of his book, Bruised Never Broken, with broadcaster Eamon Dunphy who said the book was ‘fantastic’. Photograph: Aidan Crawley

Writing his memoir was “up there” with the many challenges Phil Coulter (77) has faced in his professional career, he said at the launch of Bruised Never Broken, in Dublin on Thursday night.

He compared it to “trying to get the Dubliners into the studio at 10 o’clock in the morning, especially when you had Ronnie Drew telling you that the morning pint of Guinness was the most important one of the day ‘because it takes the taste of the f**king toothpaste out of your mouth’”.

He also mentioned the challenges “of getting the Bay City Rollers to sing in tune; of getting Richard Harris to stay off the drink long enough so we could to do our gigs; of getting Jimmy Galway to stop playing the tin whistle like an Orangeman; of getting Van Morrison to lighten up; getting the Furey Brothers to turn up; getting Billy Connolly to shut up”.

In writing the book he recalled the advice of broadcaster Eamon Dunphy, who launched it: “Philo, you better start this f**king thing while you can still remember stuff.”

Thanking Dunphy he asked “what can I say about Eamon Dunphy that he hasn’t already said about himself?”.

“We’ve been friends for a long time.”

For his part, Dunphy described the memoir as “a fantastic book”.

“It really is the story of a marvellous life, a great life, a man who’s a master of his craft.”

He said the book “does not tell the story of a glamorous life”.

“It tells the story of a tough life. Phil has known some pain and sorrow, he’s known disappointments and professional failing, but he overcame all of that. He talks about all of that, he writes about it.

“He’s a good man too, but a tough man, someone to respect and admire rather than someone to fall in love with. And I mean that as a compliment. And that’s why for me to be asked to launch this is very special indeed,” he said.

Speaking earlier, Coulter told The Irish Times of his relief at the Brexit deal announced earlier in the day.

“Even an imperfect deal is better than no deal at all,” he said.

And he played down the current level of dissident activity in his native Derry. “Having seen Derry in the worst of times I wouldn’t want people to get the feeling that it’s descended back into chaos, because it hasn’t. Its restricted to a very small number of people,” he said.

Where the rugby anthem Ireland’s Call, now also adopted by other cross-border sports, was concerned he does not take any of the criticism personally.

“History has proven that it ticked the box it was supposed to tick,” he said.

He had been asked by the IRFU “to come up with a sporting anthem”.

“Scotland has Flower of Scotland Wales has Bread of Heaven, they are not national anthems but they are sporting anthems.” As to whether it was likely to become a national anthem in the event of a united Ireland, whenever, he would be “thrilled, obviously”. He had heard of instances of schoolchildren, when asked what was Ireland’s national anthem, singing “Ireland, Ireland , etc.”

Pushed as to which was his own favourite of all the songs he has written he responded “The Town I Love so Well, without a doubt.”