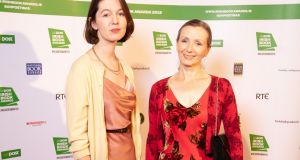 The British Book Awards, or Nibbies, have announced eight shortlists with a strong international flavour for the “Baftas of the book trade”, their coveted Books of the Year Awards.

The Prix Goncourt-winning Franco-Moroccan writer Leila Slimani lines up next to Michelle Obama’s account of life inside and outside the White House, Becoming, sits next to Michael Wolff’s Trump era exposé, Fire and Fury, while bold conversation starter Slay in Your Lane: The Black Girl Bible by Yomi Adegoke and Elizabeth Uviebinene competes with the essay collection Feminists Don’t Wear Pink (And Other Lies), curated by Scarlett Curtis.

Giants of children’s books Jacqueline Wilson and David Walliams line up next to the young Nigerian-American writer Tomi Adeyemi, shortlisted for her debut Children of Blood and Bone, and Ben Brooks’s Stories for Boys Who Dare to be Different, illustrated by Quinton Winter, while chefs Yotam Ottolenghi and Tara Wigley compete with the Michelin-stared Tom Kerridge.

Philip Jones, Chair of the Judges and Editor of The Bookseller, said: “The shortlists this year showcase the breadth of talent available to publishers in the UK, after a year in which international writers such as Leila Slimani, Heather Morris, Sally Rooney and Tomi Adeyemi have shown that there is a real hunger for stories, well-told, that originate elsewhere but reflect back on us. The sales success of these titles, along with non-fiction hits such as Michelle Obama’s Becoming, Michael Wolff’s Trump era exposé, Fire and Fury, and Feminists Don’t Wear Pink, demonstrate that today books sit at the intersection between culture and politics, and between entertainment and reality.”

Alice O’Keeffe, Books Editor at The Bookseller, said: “Our shortlists this year took the judges from Georgian London to the Second World War to contemporary New York. There are books from exciting fresh voices at the very start of their career, contrasted with books from with well-established brand authors at the top of their game. These are the books that sum up 2018 but which, we think, will be read for years to come.”

Produced by the UK’s book industry magazine The Bookseller, the Nibbies are the definitive celebration of the country’s leading creative industry. Showcasing the enormous range and depth of modern publishing, they are the only literary awards in the UK that champion books that have been both well-written and brilliantly published, honouring not just the author and illustrator of a title but the entire publishing team.

The category winners, and the overall Book of the Year, will be announced at a glamorous ceremony at Grosvenor House in London on 13th May. Presented by the author, radio DJ and TV presenter Lauren Laverne, the night will bring together authors, publishers, booksellers and literary agents for a celebration of the entire book industry.

Following last year’s addition of Audiobook of the Year, The Bookseller has expanded the awards yet again: In 2019, there will be two, instead of one, children’s awards - one for Fiction and another for Illustrated and Non-fiction - reflecting the importance of children’s books to the wider market and the range of titles published each year.

Nonfiction: Narrative BOOK OF THE YEAR
Everything I Know About Love by Dolly Alderton (Fig Tree)
First Man In: Leading From the Front by Ant Middleton (HarperNonFiction)
Becoming by Michelle Obama (Viking)
The Secret Barrister by The Secret Barrister (Picador)
The Language of Kindness: A Nurse’s Story by Christie Watson (Chatto & Windus)
Fire and Fury by Michael Wolff (Little, Brown)

The category winners will be decided by eight separate judging panels, with judges including acclaimed illustrator Axel Scheffler, star food critic Jay Rayner and Adam Kay, author of the multi-award-winning bestseller This is Going to Hurt. A separate panel will go on to choose the overall Book of the Year, where the Labour MP Jess Phillips is judging alongside Sky News presenter Kay Burley.

The British Book Awards or Nibbies have been the leading awards for the book trade since 1990. Celebrating the best books, the best bookshops and the best publishers it is supported by all major industry associations including The Publishers Association, The Booksellers Association and the Independent Publishers Guild. The 2019 awards ceremony will take place on May 13th at The Grosvenor House, London.