Make Me A City review: A daring and unruly novel

Jonathan Carr ambitiously attempts a reconstruction of the development of Chicago 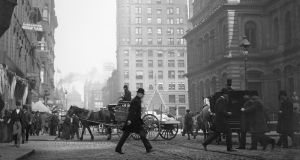 Chicago is the most important character in Make Me A City.

Book Title:
Make Me A City

Constructed from a set of fictional “found” documents, including Chicago: An Alternative History, 1800-1900 by Prof Milton Worship, various journals and notebooks, a set of letters from Eliza Chappell to her correspondent F, and transcribed oral accounts, Make Me A City attempts a large-scale reconstruction of the development of Chicago during its first century, the 19th. Rather than following the story of a key protagonist, Make Me A City follows the story of the metropolis. As with Dickens, the city is a character in its own right; in Carr’s novel, however, it is the most important character of all.

We follow the narratives, sometimes interconnected, of Jean Baptiste Point de Sable, the overlooked half-French half-freed slave who settled in the wilderness of Echicagou; John Wright, an industrial giant; Antje Hunter, a woman who fights for a public role in the city; and others. This development through characters means that there is little in the way of plot propelling the novel, which takes a chronological approach mirroring the various directions of the city’s progress. At just under 500 pages, many readers might need more to hold their attention.

Taking in the stories of immigrants, predominantly from Ireland, Germany and Sweden, Carr gives their accounts in modes that are sometimes successful, but at other points are overblown and stereotyped. A discovered chapbook told from the point of view of an Irish migrant from the Blaskets named Dubhaltach Bruaideadh, is sensitive in places. When he recounts the death of his wife, for example, he tells us “I found myself alone again in the world, one tiny heart beating in the big silence”. However, this is undermined by the overblown Hiberno-English of the text and the cliched references. “That great ruffian was different from the rest of us, and not only because he stood tall and strong as the rock of Teeraught. I swear God’s grace surrounded him like a smothering of Blasket mist.”

This is an ambitious book, and its prose is often entertaining and very readable. However, its formal aspirations never quite ring true, and sometimes the inhabitation of different voices and genres falls from imitation into parody. The historical work, Chicago: An Alternative History, 1800-1900, is not written using the conventions of an historical work (it includes dialogue, and is very informal); and the diary of Antje Hunter includes non-standard spelling (“presumpsushly”) that feels less authentic than it does patronising.

This might sound pernickety, but there is a great deal of fun to be had with such formal experimentation (Susannah Clarke’s Jonathan Strange & Mr Norrell, for example, invents texts and inhabits their voices magnificently). One can’t help but feel that Carr has missed a trick, or overshot the mark. That said, if a reader is to forget the novel’s conceit, and read it as a cohesive narrative account rather than attempting to believe its existence as found texts, the experience of the novel is improved.

There is also, in the background, an unspoken violence that is never aired, and which should probably be acknowledged. The presence of Native American characters is always filtered through the prejudices of white Europeans, and the one direct encounter (told through Antje’s diary) depicts a native chief as having “the trajicest face I ever saw”. He tells Antje of the Great Spirit and speaks only through myth and vague spirituality. The opportunity for a more sensitive rendering, or for the insertion of a found historical document to correct the record on native erasure and misrepresentation, would have made for a more balanced and interesting account to make use of the opportunity to juxtapose voices and experiences.

“Making a city is not a genteel process,” one of Carr’s characters tells us. “Chicago will sometimes forget its manners. If the beginning has been a little unruly and boisterous, we should not be surprised.” This is an unruly novel: daring and sometimes entertaining, but unfortunately falling short of its own ambition.

Blood: A disappointing journey into the Irish psychosphere
Real news has value SUBSCRIBE