Tomi Ungerer: Layers of genius in a beautiful, busy mind

The controversial French artist made West Cork his adopted home. His posthumous exhibition of mostly collages at the Centre Culturel Irlandais reveals his maverick brilliance 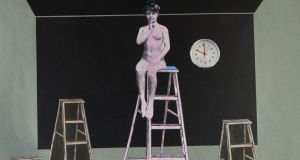 What do you do if you have a mind that won’t leave you alone? Some take refuge in alcohol and drugs, others spend a lifetime trying to quiet the overload in other, less self-destructive ways. Therapy may help. Tomi Ungerer turned to art. His posthumous exhibition, En Attendant, currently at the Centre Culturel Irlandais (CCI) in Paris, quite literally shows the layers of his thought.

With the exception of three sculptural pieces, the works are all collages. Ungerer, who died earlier this year, made collages all his life. Like Matisse, he turned to it more strongly in his latter years, when his hands didn’t always have the required deftness and agility his drawing practice required. But, like Matisse, the making never ceased.

And oh, how that man could draw. Worlds of nuanced rage and acute political and social observation could come together in a few well-placed, economical lines. My brother worked with him, installing an exhibition of his work in Dublin in the 1980s, and Ungerer, always a generous friend, made him a thank-you sketch. In it, Margaret Thatcher, the bête noir of the period, is lifting her T-shirt. Underneath, her body is a skeleton. A pair of cruise missiles jut out in place of her breasts. It is witty, vicious and utterly perfect.

In a different register, in his immensely successful children’s books, anthropomorphic animals are drawn to tread a fine line between danger and safety, anxiety and comfort, making them beloved of children who didn’t find their own internal realities reflected in the banalities of Dick and Jane. Maurice Sendak, acclaimed author of Where the Wild Things Are, cited his friend Ungerer as a major influence, and credited him with changing the face of children’s publishing in America.

Imagined as a response to Samuel Beckett and, more specifically, to Waiting for Godot, the 37 collages in En Attendant were, for the most part, made over the past decade, with 19 created in 2018. Most are untitled, and are shown in loose thematic groupings. Nothing is, however, overt or made plain. The links and inferences are there for you to draw for yourself. Aria Ungerer, Tomi’s daughter, who curated the show along with the CCI’s director, Nora Hickey, says that her father always eschewed intellectualisation. He didn’t want to tell you what his work was saying, or doing, instead he preferred to let it play, and prey, on your mind.

Ungerer was also a great fan of the absurd. Perhaps that was inevitable, given his childhood. He was born in Strasbourg in 1931, and experienced his home city go from being French to German and back again. Speaking French was outlawed. Then speaking German was banned. The Germans burned French books. The French burned German books. The school system, he said, with a provocative smile, was excellent under the Nazis.

His children’s book, Otto, which chronicles the Holocaust and its aftermath through the eyes of a teddy bear, was originally published in German in 1999. Ungerer believed that sense of darkness is necessary for children to live well in the world, and the world paid attention to his work. In 1998 he had been awarded the Hans Christian Andersen Award and, in 2003, was appointed as the first Ambassador for Childhood and Education by the Council of Europe.

In one of the works in En Attendant, a trio of Otto-like bears are collaged in front of an image of the ornate Grand Gallery of the National Gallery of Ireland. The round eyes of the bears gaze out, in front of some of the great figures of history, as represented by the paintings on the gallery walls. Perhaps the bears are innocent, happy gallery visitors. But the blackness of the foreground, and the knowledge overlaid by a reading of Otto, gives the work a darker intent. Those in a position to build grand galleries, and commission statues to their endeavours, have a habit of treating the smaller and weaker members of society – or worse, of other societies – rather badly.

Collage as a medium seems simple – even, at a cursory glance, reductive – but Ungerer’s work repays closer attention, and his process was meticulous. Ungerer was a fan of the pioneering Surrealist and Dada figure Max Ernst, and collage allows for those coalitions, connections and juxtapositions that speak to a certain sense of perception. It also allows for distancing, disconnection and tearing apart. In some ways, it functions like memory, and false memory, where we can disconcert ourselves by overlaying time and place as we attempt to reconstruct past occasions. And that’s before we even get into what happens in our dreams.

In one, highly memorable image, a large naked, hairy and very pink man lounges in a field as a row of cows gather on the horizon. Far from pastoral, the scene is somewhat sinister. Ungerer always said he was beset by dreams and nightmares at night, and omnipresent thoughts by day. Asked by his daughter, Aria, whether he would have preferred a quieter mind, the answer was an emphatic “no”. Instead he moved, from New York, via Nova Scotia, to the wilds of West Cork, and continued to observe the world through the lens of his art.

An older work, Lost Weekend, Waiting for Godot, dates from when Ungerer relied on a temperamental black-and-white photocopier, and revelled in the distorting graininess it lent to its reproductions. A figure in a suit and hat is walking away from the camera in an Escher-like space where a row of bar stools are overlaid at weird mirror-image angles. Black blocks add to the melancholy menace. Choice is frequently illusory, and this is not a room anyone is getting out of any time soon.

In the cluster of five works that deal with religion, a literal flight of priests soar through a blue sky over a stormy sea. Beside these, a Giant’s Causeway of jutting thumbs worship a pair of close-pressed hands. To their left, in another work, three dogs sit in a row, gazing at the enormous head of a fourth dog. The background is the view from the Ungerer family’s Goleen home. It’s beautiful and, of course, utterly absurd. Who would worship a dog? On the other hand, maybe canines have some deeper wisdom, and humans have been known to bow down before stranger and far less worthy beings.

Ungerer’s career as a multi-award winning children’s author and illustrator in the USA was cut short by his publication of his own illustrated pornography, including, in 1969, Fornicon, which (to the artist’s acknowledged delight) is still banned in the UK. A more lighthearted Kama Sutra for frogs followed. How deeply shocking. But again, look more closely, and be invited to think of the things we’re not allowed to acknowledge in the polite world.

Just as Ungerer introduced danger and darkness to the stories we tell children, so too did he want people to address and acknowledge their own darknesses. After all, he had witnessed humanity at its worst throughout the second World War, and then watched it all being politely put away to preserve the peace. He believed in giving voice to the unsayable, and space for people to embrace who they really were, not who society told them they ought to be. It is far more perverse to denounce Jews, and ship millions to gas chambers, than it is to enjoy distinctly non-vanilla sex. Hunger, disease, poverty and inequality are – or at least ought to be – far more shocking than consensual bondage.

In En Attendant, another cluster of five images invites a view into this past. In one low-key but immensely powerful collage, four women in their underwear are gathered, behind a uniformed figure. One has a shaved head. Black cut-out shadows loom above them. The uniform is that of a French soldier, but Ungerer has added an armband with an insignia of his own devising. The artist had always been horrified by France’s whitewashing of its own past, when the Vichy regime enabled the deportation of Jews – a fact that was only officially acknowledged by the French government in 2009.

More or less anonymous, by choice, in Ireland, Ungerer was hugely famous in France. In 2007, the city of Strasbourg dedicated a museum to his life and work, making him the first living artist to have such an honour in France. The French president made him a Commandeur de la Légion d’Honneur. He began working on En Attendant in mid-July of last year. Seeing a layout of the exhibition, in miniature, in Hickey’s office, he said: “Je suis très content, ich bin ganz zufrieden, I’m very happy,” his three worlds of France, Germany and Ireland coming together in a moment of satisfaction. He died at his West Cork home in February, just five weeks before En Attendant had its public opening.

En Attendant by Tomi Ungerer is at the Centre Culturel Irlandais, Paris, until July 5 centreculturelirlandais.com

A second exhibition, Overdose, by Ungerer, is at Galerie Georges-Philippe & Nathalie Vallois in Paris from April 17 to May 25 galerie-vallois.com