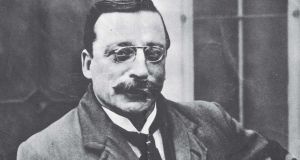 Arthur Griffith: James Joyce refers to him in Ulysses a number of times.

Seen through James Joyce’s eyes, Arthur Griffith comes alive as the significant figure he was before 1922. That year, Joyce’s Ulysses was published and Griffith dropped dead.

Joyce’s best-known biographer, Richard Ellmann, believed references in Ulysses to Griffith are “more than coincidence” given Griffith’s election as president of Dáil Éireann, when it voted to accept the treaty in January 1922: “Joyce wished to salute Griffith’s at last successful efforts.”

Griffith, who founded Sinn Féin in 1905, was the only editor to publish in full Joyce’s letter protesting his inability to have Dubliners published without cuts.

Griffith’s economic and social ideas are often overlooked because he was no socialist, but Joyce appreciated them. In 1906, in Italy, Joyce wrote that “as far as my knowledge of Irish affairs goes, he [Griffith]was the first person in Ireland to revive the separatist idea on modern lines nine years ago. He wants the creation of an Irish consular service abroad and of an Irish bank at home.”

Joyce added: “A great deal of his programme perhaps is absurd but at least it tries to inaugurate some commercial life for Ireland and to tell you the truth once or twice in Trieste I felt myself humiliated when I heard the little Galatti girl sneering at my impoverished country. On my arrival in Trieste I actually ‘took some steps’ to secure an agency for Foxford Tweeds there.”

Five years earlier, both Griffith and Frank Fay, in Griffith’s United Irishman paper, had recommended that people read Joyce’s ‘The Day of the Rabblement’ essay. Joyce published this in pamphlet form following the refusal of his university’s literary magazine St Stephen’s to include it as an essay. Griffith asked, ‘why we should grow Censors at all in this country’.

Both Griffith and Joyce had a large repertoire of songs. Griffith’s future wife, who sang and played piano, was a neighbour of David Sheehy and may have attended Sheeny’s popular social evenings when Joyce was there. Griffith called her “Molly”, not “Maud” as she was known formally. Is it a coincidence that Joyce gave this name to Leopold Bloom’s wife in Ulysses? Or that Ulysses – about a partly Hungarian man – was set in the year 1904 in which Griffith published his best selling vision of Ireland’s future, The Resurrection of Hungary (which Joyce read)?

‘The only paper in Dublin worth reading’

In Italy, Joyce was sent copies of Griffith’s papers. According to his brother, he regarded Griffith’s United Irishman as “the only paper in Dublin worth reading, and in fact, he used to read it every week”.

In June 1910, Joyce placed an advertisement in Griffith’s Sinn Féin paper for Dublin’s Volta cinema, which Joyce had helped to establish and which he was then back managing for some months. On a front page on which his advertisement appeared, there was also a cartoon, “Home Rule Comet” that directly inspired Joyce to write one of a number of articles for the Italian Il Piccolo della Sera explaining Sinn Féin policy.

In August 1912, Joyce consulted Griffith about continuing difficulties with Irish publishers in respect to Dubliners: “I went then to Griffith who received me very kindly and remembered my letter [published a year earlier],” he wrote.

Joyce was by no means hostile to Ireland, even if he and Griffith were each scathing about aspects of it. Joyce described Ulysses as “the work of a sceptic” but added that, “I don’t want it to appear the work of a cynic. I don’t want to hurt or offend those of my countrymen who are devoting their lives to a cause they feel to be necessary and just.” George Clancy, who once taught Joyce some Irish and became mayor of Limerick in 1921, was murdered by men believed to have been Black and Tans.

Joyce and Griffith both used and loved the National Library of Ireland. Among distinguished writers whom Griffith encouraged and published in his United Irishman (including WB Yeats) was Richard Irvine Best, an employee and future director of the National Library. In her remarkable account of the extent of the United Irishman’s influence on Joyce as “a significant and documentable source”, Maria Tymoczko identified among other work Best’s translation of The Irish Mythological Cycle by Henri d’Arbois de Jubainville that appeared weekly in Griffith’s paper in 1902. Frank Callinan has also described the “the magnificent ambition of Griffith’s United Irishman”.

Even more intriguing is Andras Ungar’s exposition of how the search for kinship between Stephen and Bloom in Ulysses is rooted in a “finely modulated” representation of Austro-Hungarian history that qualifies Griffith’s analogy in The Resurrection of Hungary, while at the same Joyce made errors of detail that are demonstrated to originate in Griffith’s work.

In the ninth episode of Ulysses, set at the National Library, four out of five participants to whom Stephen (Joyce’s alter ego) expounds his theory about Shakespeare’s Hamlet had some of their work published by Griffith in his papers. During this episode, the socialist Fred Ryan (“Fraidrine”) too appears. He also wrote in the United Irishman.

Best’s work in Griffith’s paper included a rendering of ‘The Destruction of Da Dearga’s Hostel’, from which derives a rich subtext of James Joyce’s most famous short story The Dead. The story’s title echoes a song much vaunted by Griffith and his best friend William Rooney, entitled The Memory of The Dead. Often sung at advanced nationalist events around 1900, this became known also as Who Fears to Speak of [17]98?

When Rooney died young of typhoid, Griffith was distraught. He was not pleased that Joyce in 1902 savagely reviewed a small posthumous collection of Rooney’s poems that Griffith published. Yet Joyce kept a copy of the volume until his own death, and the ghost of Rooney haunts Joyce’s The Dead in ways that I explain in my new book on Griffith.

Joyce refers to Griffith in Ulysses a number of times. His assessment that Griffith “has no go in him for the mob” was one that Griffith shared, as he placed his trust in other leaders such as de Valera and Collins.

In 1922, after Ulysses was published in Paris, Joyce was told that Griffith’s cabinet was considering nominating Joyce for the Nobel Prize in Literature. Nothing came of the idea when the Civil War erupted, and Griffith died in August.

The Enigma of Arthur Griffith: ‘Father of Us All’, by Colum Kenny, is published by Merrion Press at €19.95

Beyond the Menu: Ireland’s new food royalty, served up on a plate
Real news has value SUBSCRIBE