Sketches of the Criminal World: Cold, unromantic stories of criminality

Book review: Varlam Shalamov draws on his 15 years as a political prisoner in Russia 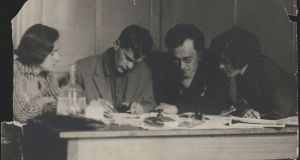 Alexandr Solzhenitsyn sub-titled his Gulag Archipelago “An experiment in literary investigation”. In a country where socialist realism echoed the lies of the state, Solzhenitsyn was returning literature to what he saw as its original vocation – speaking the truth. In Russia, fiction was dead, surpassed by reality. A writer no longer needed to invent.

Alongside The Gulag Archipelago – its meticulous research and compilation of first-hand accounts of every aspect of the penal system that was the bedrock of Stalinist terror – stands a monument just as revelatory. It is the short stories of Varlam Shalamov (1907-1982), drawing on his 15 years as a political prisoner in the camps of the sub-Arctic Siberian region of Kolyma.

It is difficult to estimate mortality rates in the Kolyma area of the Gulag, but as many as 300,000 of the nearly million prisoners sent there are believed to have died, from the cold, starvation and violence from both the authorities and other prisoners. Shalamov was convicted in 1937 and freed in 1951. Initially he worked in the gold and coal mines and on construction projects. He owed his survival to having been selected for work as medical assistant in an infirmary.

“Every story of mine is a slap in the face of Stalinism,” Shalamov wrote. “A slap in the face must be short, resonant.” He dismissed the novel form, considering elaborate narratives to be aestheticised deceptions, unfit for the task of relaying a reality earlier generations of writers could never have imagined.

Shalamov’s stories offer no hope. There are no heroes in a world where it was all you could do not to steal your starving fellow prisoner’s bread ration, or not denounce him in the hope of improving your own chances of survival. There is no glimmer of a redemptive moral message, such as we find in Solzhenitsyn. Shalamov describes a world of labour, frostbite, starvation and perpetual violence. But he does it from within a moral and literary tradition that precedes Stalinism and his hope was to connect, however precariously, with an earlier, more humane era.

Shalamov wrote in a letter to Nadezhda Mandelstam: “The link between eras, between cultures has been broken; the exchange has been interrupted and our mission is to pick up the ends of the string and tie them back together.”

Shalamov’s descriptions of Kolyma are superficially repetitive, but each tale manages to be unique and revelatory. He saw himself as the ultimate outsider: “My writing is no more about the camps than St Exupery’s is about the sky or Melville’s about the sea. My stories are basically advice to an individual on how to act in a crowd”. And yet, his accounts are never didactic. And, whatever the author’s protestations that he is not writing “about” the camps, the stories create a complete mosaic of the world of the condemned and beyond that of the society which enslaved them.

His stories can be so factual they read like essays and his essays sometimes evolve into stories. Some of his narratives are mere sketches or prose-poems – Shalamov was also a poet, and there are indications he valued his poetry above his prose. His tone is restrained, the style detached, but by his own account he composed in a frenzy, weeping and raging, declaiming the words aloud. He performed this labour without the prospect of publication. Even after the death of Stalin in 1953, the subject of the camps was taboo. Public discussion of the Gulag would have meant acknowledging the utter failure of the revolution. Shalamov’s stories were published posthumously in Russia only in 1987.

This volume, Sketches of the Criminal World, comprises a collection of essays of the same title and Shalamov’s last two collections of stories. The opening essay, What Fiction Writers Get Wrong, begins: “Fiction writers have always represented the criminal world sympathetically, sometimes sycophantically. Deceived by cheap and tawdry ideas, it has given the world of thieves a romantic aura. Fiction writers have been unable to see through the aura to the actual revolting reality of that world.”

Shalamov describes how violent criminals and political prisoners were enslaved together, with the criminals in charge. The ordinary prisoners were defenceless against the depredations of these organised gangs, who stole their food and clothing, and raped and murdered with impunity. This sub-culture (or culture of subhumans, as Shalamov would have it) was used by the state to terrorise those it considered politically unreliable elements, and in some cases to exterminate them. The persecution of prisoners by prisoners was institutionalised in the Gulag.

Shalamov is such a powerful and consistent writer that you can approach his work at random, from any point. Each piece is a cold, glittering fragment of the mosaic. For those who prefer to start at the beginning, Kolyma Stories (comprising Shalamov’s first three collections, in a single volume) was published by NYRB in 2019. A very good selection of earlier stories is also available from Penguin as Kolyma Tales, translated by John Glad.