Whalebone petticoats and lard: how to dress for a night out in 18th-century Dublin 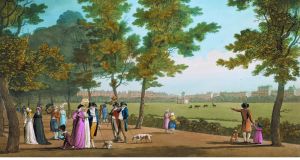 My debut novel The Emerald Dress takes you back to Dublin in 1719, when silk dresses were the height of fashion for those who could afford them, but getting ready for a night out on the town in Dublin 1719 wasn’t as simple as putting on a dress.

A woman would first have to put on a linen shift and over it a petticoat, stays and hoops to support her skirt. The hoops were often so wide that Swift once wrote “Have you got the whalebone petticoats yet?... A woman here may hide a moderate gallant under them.”

Next, she would place a triangular shaped piece of fabric called a stomacher at the front of her body. She might pin it in place at the front, or her maid might secure it with linen ties at the back. She would then put on the outer dress itself and if her family was wealthy enough, it might be embroidered with metal threads of gold and silver.

Only then did she do her hair, apply her make-up and finally put on her shoes. Women would wear their hair high with some placing a little cushion on top of their head to achieve maximum height. Other ladies put wire frames on their heads and arranged their hair around the frame, setting it in place with pomade. This pomade might be made from lard and a few drops of perfume. Unfortunately, the pomade attracted lice and as it took so long to fix their hair, women often left it this way for months and used a tool, that looked like a mini-backscratcher, to reach in behind the wire so that they could scratch their itchy scalps.

So who made these clothes in early 18th-century Dublin? Dublin was a fast growing city and by the middle of the century, it was thought to be the second largest city in the British empire. Much as today, fashionable textiles changed with the seasons, and business was brisk for dressmakers. The city was governed by a ruling aristocracy and at the centre of that power was the viceroy, the monarch’s representative in Ireland, who held court at Dublin Castle when parliament was in session. When the viceroy was in attendance at the castle, the social calendar was busy and many festivities, balls and celebrations were hosted there with no apparent expense spared. As a result, the demand for luxury textiles grew.

The cloth itself was woven by weavers who often worked at home. Most were located in the Liberties area, outside the walls of Dublin Castle, and the weaving of patterned silks was a highly skilled task. Silk designers in Dublin were influenced by the latest designs in London, Lyons and Paris, but often introduced slight differences for the local market. Once the cloth was woven, dressmakers and seamstresses might be employed directly by the rich but some dressmakers had their own workshops.

If you could afford to have your gown embroidered by a professional embroiderer you were wealthy indeed, though embroidery was also an acceptable pastime for noble women. In The Emerald Dress, the heroine Abigail Harton is able to secure work and much needed income for her family by selling a silk damask design to master weaver Hugh Gavin in the Liberties. She also secures work as the embroiderer of the emerald dress at the centre of the novel.

Unlike today, dressmakers often cut cloth to standard patterns. Most clothes were made to measure and ready-made clothes were generally not available, unless a person was buying second hand clothes for example. However, linen undershirts and nightgowns were so loose that they could be sold ready-made as they didn’t require an exact fit.

In more modest families, mothers, sisters and daughters often made the clothes for their family members. Tailors might also make dresses for women by employing seamstresses.

So where could you buy your cloth to make that dress? Well, there were many shops in the city at that time including Anne Exhee’s shop in St Patrick’s Close who advertised in the Dublin Weekly Journal on August 23rd, 1729 that “all sorts of clothes ready-made, at very reasonable rates” were for sale. She even states that a buyer will save 20 percent if they deal directly with Anne herself. It makes me smile to think that there were savvy business women back then with excellent marketing skills.

However, after the Acts of Union of 1800, much of upper-class Irish society left Dublin for Britain and with it the luxury clothing industry declined, but from the beginning of the 18th century and throughout, Dublin was a thriving centre and cloth was an important commodity that supported weavers, dressmakers and embroiderers in the city.
The Emerald Dress by Vivienne Kearns is published by Poolbeg Press