Painting the British empire in a negative light 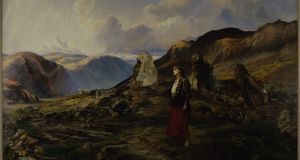 There is no room for ambiguity in Elizabeth Thompson Butler’s second Irish painting, Evicted (1890), the most powerful depiction of Irish social distress in the 19th century. Oil on Canvas. Photograph: Department of Irish Folklore, University College Dublin.

A Victorian painting shows two army recruits travelling through a Kerry glen, accompanied by British soldiers in red uniforms. The ragged clothes of the men highlight their poverty. One marches with a clay pipe in his mouth, hands in the pockets of his torn trousers, and a defiant expression in his eyes. The other turns his body to look back at a thatched cottage in the distance, with smoke curling from its chimney. The sweep of his gaze also takes in a ruined cottage which commands the foreground to his right.

The painting is Elizabeth Thompson Butler’s Listed for the Connaught Rangers (1878) and the two recruits are heading into the wars of the British empire. Viewed today, Elizabeth’s painting underlines Ireland’s historically complicated relationship with Britain, a salutary reminder in these days of Brexit and contested borders.

Born in Lausanne, Switzerland, where her parents had gone to be with their friend Charles Dickens, Elizabeth Thompson spent her life in travel between England and the Italian Riviera. She and her sister, the poet and journalist Alice Thompson Meynell, were home-schooled by their father and Elizabeth was tutored in art by her mother, before undertaking formal art training in London and Florence.

Elizabeth came to Ireland for the first time in 1877 on her honeymoon. She describes Connaught Rangers as her first “married picture” and she sketched it in Kerry, where she also found her models for the two recruits. She was at the height of her fame when she married William Butler, an Irish Catholic officer in the British army.

She had become an overnight celebrity in 1874 after exhibiting a Crimean War painting, popularly called The Roll Call. Her innovation, which captured the mood of the 1870s, was to depict the suffering of ordinary soldiers in combat or to prefigure, as she does with Connaught Rangers, the future prospect of suffering in battle. Yet when Connaught Rangers was exhibited at London’s Royal Academy in 1879, some British commentators did not view it as drawing attention to Ireland’s economic plight that forced its youth into the army, but rather as a tribute to a country that despite its social problems could still send young men to war: as with the Brexit debate, it all depends on viewpoint.

However, there is no room for ambiguity in Elizabeth’s second Irish painting, Evicted (1890), the most powerful depiction of Irish social distress in the 19th century. Here a woman stands by the ruins of her cottage as the eviction party disappears down the glen. Her possessions are strewn over the ground. This is another war – the Land War – and Elizabeth uses similar techniques as she does in her most famous war paintings, The Roll Call, Scotland for Ever! (1881) and Balaclava (1876).

In these paintings and in others Elizabeth shows the debris of war – a piece of uniform or a weapon – scattered in the foreground of her paintings. In Evicted it is the woman’s broken furniture. Elizabeth sketched Evicted on site near Glendalough in Wicklow just after the eviction had taken place. Sitting there amongst the smouldering ruins of this woman’s cottage, she was embarrassed to be an “English sympathizer”. She told her sister Alice that what she witnessed made her a “little sick”. However, the Conservative British prime minister Lord Salisbury declared that the inviting nature of the painting’s background made him wish that he could witness an eviction himself. Elizabeth was furious at his wilful misinterpretation of her work.

During the painting’s composition the Butlers were living in Wicklow, and had formed a friendship with Charles Stewart Parnell. They were sympathetic to Parnell’s attempts to achieve Home Rule in Ireland. The irony was, of course, that William Butler’s job as a high-ranking army officer was to extend and preserve the empire. Yet he was deeply aware that European imperialism was nothing more than land-grabbing.

Elizabeth steered a course between patriotism and sympathy for those who suffered in war. She was the soldiers’ heroine and at the height of her fame troop manoeuvres were conducted by the army so she could observe and sketch horses and men in motion. She was championed by Queen Victoria, who claimed The Roll Call from the Manchester industrialist who had commissioned it. She triumphed in a male-dominated art world, yet the Royal Academy refused her the elite status of membership to its all-male ranks.

By the end of the 19th century she found it hard to adapt to the jingoistic imperial climate in Britain, eschewing painting scenes of imperial conflict that glorified war. Then in 1898 William was offered the command of British forces in South Africa. Here he attempted to avert a course towards war, warning the Salisbury government of the consequences of conflict with the Boers. He was forced to resign and was castigated by war-mongering sections of the press, including the Daily Mail. Although William was ultimately vindicated, the Butlers experienced a difficult period in the early 1900s resulting in their permanent move to Ireland, to Bansha Castle in Co Tipperary, in 1905. Elizabeth remained when William died in 1910.

Two of her sons survived the first World War; one was a Catholic army chaplain. Although she painted the war and could draw upon her sons’ experiences, her career had diminished. During the Irish Civil War Bansha was commandeered by Free State soldiers and when republicans attacked the house her soldier son, Patrick, had to rescue her paintings. One of her most important works, The Camel Corps (1893), a scene of mounted Egyptian troops, which she sketched during her time in Egypt in the 1880s and early 1890s, was shot through with bullets. Elizabeth spent the final years of her life with her daughter at Gormanston Castle in Meath.

Elizabeth’s reach as an artist extended across the empire and she painted historical scenes of Waterloo and the Crimea. Connaught Rangers was accompanied by another of her paintings at the Royal Academy of 1879: The Remnants of an Army, Jellalabad, January 13th, 1842 (1878). An historical work of art, it records the almost total annihilation of British forces in Afghanistan in an 1842 campaign. Painted in the late 1870s it served as a reminder to the government of Benjamin Disraeli of the dangers of military intervention in that country. In the early years of the 21st century cartoons of the painting appeared in the British press in the midst of the Nato intervention, serving yet again as a warning from history by a painter whom history has largely forgotten.

Elizabeth was a traveller all her life, revelling in the landscapes of Ireland, Italy and Egypt. When her husband was offered a choice of military posts in Britain the 1890s, Elizabeth chose Dover for him so she could look out over the water to France. She lived and died a Europhile. Her paintings have a lot to tell us and now more than ever is the time to recover her life and her vision.
Lady Butler: War artist and traveller, 1846-1933 by Catherine Wynne is published by Four Courts Press (€55)