Children’s books: In the Key of Code breaks new ground

The Children of Lir , The Fate of Fausto , Scúnc Agus Smúirín, The Ghouls of Howlfair 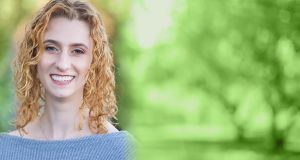 Aimee Lucido takes a totally original approach to the verse novel, using the language of music and computer code to carry the story.

When words fail us, we often turn to music to express our emotional lives. When music fails Emmy, the heroine of Aimee Lucido’s inventive, perspective-altering debut novel, she turns to computers to find a new language of self-expression.

In The Key of Code (Walker Books, £6.99, 10+) takes a totally original approach to the verse novel, using the language of music and computer code to carry the story. Emmy is the daughter of struggling musicians who have moved to California hoping for a big break. Unable to make instruments sing the way her parents can, Emmy feels like an outsider in her family, and her status as the new girl only heightens her alienation. At her new school, she is the “only one in a room full of duets trios symphonies singing a solo”.

When fate forces her into a computer coding class, she discovers that an algorithm can have “inside it a little rhythm”; “For the first time I know there’s music in me.” Lucido creates a distinctive voice for Emmy through musical allusion. She walks in time to Beethoven’s Minuet in G, her “heart thumps in three-quarter time” and her first approaches at friendship are “Attempted Duets.”

As she becomes versed in Java, however, Lucido allows computer code itself to become the conduit for Emmy’s emotions, as Lucido plays with text and layout, symbol and punctuation, to create a hybrid language that is accessible to even those not versed in the technical jargon of either. In the Key of Code is thoroughly original in both concept and execution, and it manages to sneak in an empowering history of women’s involvement in computers too.

In The Children of Lir (O’Brien Press, £12.99, 3+), Laura Ruth Maher finds music and rhythm in the ancient Irish myth. Told in simple rhyme, the tale’s resonance with a lexicon of world legends becomes clear: “On a little green island in days of old, A story of magic and courage was told.” This is the story of an evil stepmother taking revenge upon the children who are not her own. Conor Busuttil’s pencil drawings bring character to each of the children, both in their human and their avian form, and he cleverly uses the details of torcs and headbands to ensure we know which child becomes which swan. The watercolours draw from a warm palette that cuts through the fear inspired by the flame-haired beauty Aoife, making the story suitable for young readers, as well as those already exposed to Irish mythology.

Oliver Jeffers’s new picture book The Fate of Fausto (Harper Collins, £16.99, 3+) has a timeless, ancient quality to it. The stark language sets out the original fable of “a man who believed he owned everything and set out to survey what was his”. With his arrogance and surety, the man conquers a flower, a sheep, a tree, a lake and a mountain, but they are not enough for him – he must own the world. The silent sea, however, has other ideas, and the natural order is soon restored. Jeffers uses traditional lithographic printmaking techniques to bring an old-fashioned feel to the visual rendering of the “painted fable”.

Jeffers eschews his usual typographic style for a large classic font, and there is meticulous detail applied to the rendering of each image, as well as the hardcover casing itself with its marbled endpapers. The result is an object that is as beautiful to hold as it is a delight to read. The Fate of Fausto is a cautionary tale for our times and an illustrative analogy about arrogance and anger that a young reader will grasp easily.

Scúnc Agus Smúirín (Futa Fata, €10.95, 3+) offers security galore to young readers in the form of Smúirín, the frog-shaped comforter that little Scúnc takes everywhere with him: “ag spraoi, ag siúl, ag ithe, ag ní, agus gach oiche is mé ag dul a luí”. Smúirín is soft and cuddly, but Scúnc defines the comforter by its smell. When Mamaí washes Smúirín, then, disaster strikes: Smúirín is not Smúirín anymore. Muireann Ní Chíobháin’s story will resonate with parents and toddlers and their relationship with objects of attachment, while the soft rhythmic prose is a joy to read aloud, even for someone who hasn’t spoken Irish since her schooldays. Illustrator Paddy Donnelly brings life to Scúnc’s world with a rich and glossy palette that makes space for individual scent marks for the stinky characters too.

If only Molly Thompson, the history-loving heroine of The Ghouls of Howlfair (Walker Books, £6.99, 10+), had a Smúirín to hold on to as she tries to unravel the mysteries of Howlfair, whose intriguing legends have taken a terrifying turn. The inquisitive Molly should be well used to being spooked: her home, the “impossibly ancient” Excelsior Guesthouse, is “like a haunted galleon”, and she is convinced her aunt has taken the shape of a vampire bat living in the attic. Nothing could have prepared her, however, for the drama that unfolds when hotel lodger Mrs Fullsway is found dead, possibly murdered.

Nick Tomilson’s yarn bears all the hallmarks of a good ghost story, as well as a classic detective tale, and his arch-villain, incumbent mayor Benton Furlock is a baddie in the best tradition. Featuring a fearless pairing of female investigators, and surprising, monstrous end, The Ghouls of Howlfair is just the book to get you in the mood for Halloween.