I do until I don’t: the realist’s guide to marriage 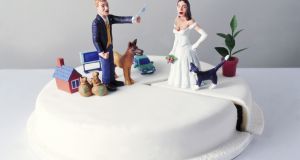 Vicki Larson suggests that couples take an “emotional” inventory every seven years (or in some cases, before deciding whether or not to have children)

There’s a reason that Father Ted’s perennially bickering couple John and Mary – a pair who can barely contain their mutual loathing– is so funny, and that’s because there’s more than a grain of truth to their relationship. Almost every Irish person knows of a couple who, for reasons best known to themselves, have decided to stay married through hell or high water. Either they are happy to be patently miserable with each other, or live separate lives together.

Plain old tradition, laziness, complacency, money, a misplaced idea of the romance of “until death do us part” – there are many reasons that some slog it out until the bitter end.

Since time immemorial, human beings may have had romantic hearts… but they’ve had promiscuous bodies. Survival instinct meant that men – and to some extent women – were hard-wired for short-term sex, and plenty of it. To propagate the species, men had to couple up with as many women as possible.

In more recent centuries, before church and state got involved, marriage wasn’t an arrangement that legally bound people to each other for life. The onus was on each couple to draw up a practical contract that best suited their economic circumstances.

And after decades of the sheer romance of marriage as a lifelong commitment, the idea of marriage having a sort of sell-by date is fast gaining traction.

Signing up to a lifetime together may have made great sense in the past… but now we’re living much longer. According to Katherine Woodward Thomas, who coined the now famous term “conscious uncoupling”: “The happily-ever-after goal of love that most of us are aspiring to is a myth that was created long ago when a life span was 35 years. We are living three lifetimes compared to early humans so it is natural to want to change partners and have two or more significant relationships in our lives.”

And the feel-good romcom of the summer also caught this zeitgeist wave. I Do Until I Don’t, starring Lake Bell and Ed Helms, saw a couple renegotiate the terms of their marriage after a documentary maker (Dolly Wells) proposes that love in the 21st century isn’t sustainable.

Sex columnist/author Dan Savage has also noticed this shift away from lifelong monogamy: “We’re now living in a period of great abundance where our basic needs are sufficiently met, and reproduction is a choice. As a result, the reasons to be with a single mate for life are less urgent,” he says. “And with the advent of connected mobile devices and the internet, we’ve entered into the era I’ve dubbed Big Dating. It means that there’s now more than one option for building meaningful and satisfying relationships.”

In her book (co-authored with Susan Pease Gadoua), entitled The New I Do: Reshaping Marriage for Skeptics, Realists and Rebels, Vicki Larson makes the case of renewable marriage contracts. Conscious coupling, if you will.

“Our current contract – ‘until death’ – might have worked when people didn’t live all that long, or when women needed men for financial security,” she explains. “But that isn’t why we marry nowadays. Now we’re looking at 50, 60, 70 years of potential marriage. Since 10 per cent of first marriages don’t even make it past five years, a renewable marriage contract makes more sense than ever.”

Larson cites one study that found that half of newlywed women surveyed said they expected infidelity would be part of their marriage while other studies found that a good percentage of newlyweds under the age of 35 have already had affairs.

“The problem with the traditional marriage is that it’s very shame-based if you don’t make it until death,” she adds. “Why should it be shameful if it doesn’t work out? If you’ve realised your kids and decided you want different things, why bow to that societal pressure to keep working at it? It’s better to give each other the freedom to live the rest of your lives.

“What we would love is a situation were couples decide what will make their marriage a success based on their values and goals instead of believing that longevity is the only way,” she continues. “I remember reading that 40 per cent of American women walked down the aisle knowing that they’d made a mistake. A lot of us have the best intentions to make the marriage work, but I wish more people knew what they were letting themselves in for.”

Larson suggests that couples take an “emotional” inventory every seven years (or in some cases, before deciding whether or not to have children), checking that values and feelings on the big stuff like finance, having children and parenting styles still tally up.

“If we had contracts we wouldn’t have years of mean, passive aggressive behaviour,” saysLarson. “You’d have to be held accountable. That’s the problem with the idea of longevity of commitment above all else. Nothing holds people accountable for that behaviour.”

Millennials, Larson argues, are more open to the idea of a Beta (or Starter) marriage. In a recent survey, 43 per cent of millennials supported a model involving a two-year trial, at which point the union could be either formalised or dissolved without a divorce or paperwork required. 33 per cent said they were open to the idea of marriage licenses granted on a five-, seven- or 10-year basis, after which terms much be renegotiated; 21 per cent said they’d give the “presidential” method a try, whereby marriage vows last for four years but after eight you can elect to choose a new partner.

Of course, Irish law doesn’t necessarily facilitate this, so how can a couple enjoy a wedding and being legally married, while still incorporating the idea of a renewable clause?

“We see it more like a pre-nup thing,” notes Larson. “It would be a contract that the couple would arrange themselves, and they come up with the ways their own marriage will continue or end.”

For those couples already with children, Larson says that in the event of a separation, hammering out the terms of a non-romantic co-parenting arrangement could well offer their kids the stability they need to thrive.

“As the child psychologist Naeema Jiwani notes, compared with conventional parenting where the mother and father have to constantly be ‘in love’ in front of their child, co-parenting doesn’t include the ‘strain’ of marriage.”

To the die-hard romantic, though the idea of a renewable marriage contract with get-out clauses may seem like pure anathema. But Larson says that couples may do away with practicalities and fall headlong for the romance of “until death do us part” at their own peril.

“Yes, there are some who say that people won’t feel as committed to making the marriage work if they know they can get out of it,” concedes Larson. “But honestly, most of us have had multiple relationships, and haven’t we been committed in each and every one of those? Again, this is something you’re going into with someone you want to be with, not just any old person. You’re consciously choosing to be with this person and you’re deciding together what you want your marriage to look like. To me, that’s the very definition of commitment.”
The New I Do: Reshaping Marriage for Skeptics, Realists and Rebels, by Vicki Larson and Susan Pease Gadoua, is out now via Seal Press