The Unforeseen review: seductive tale of causality with a twist 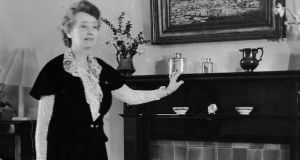 Born in Dundalk in 1889, Dorothy Macardle was a member of the brewing family. She produced just a handful of novels.

A woman buys a rundown cottage in Wicklow, remodels it, adds a studio and settles down to work on her new book, a collection of bird photographs. Now that her daughter has gone to London to study painting, she has plenty of time on her hands.

First published in 1945, Dorothy Macardle’s novel The Unforeseen is the fourth in Tramp Press’s series of forgotten and neglected texts by Irish writers, Recovered Voices. It also forms a sort of companion to Macardle’s The Uninvited, the second in that series, republished by Tramp Press two years ago.

The Unforeseen opens with Virgilia Wilde travelling from her eyrie in Glencree to visit her GP in Dublin city centre. The doctor is puzzled: her patient is in perfect health. What, she asks, is really the trouble? “Virgilia hesitated, finding it difficult to frame her answer. She said, at last, ‘My imagination is playing me tricks’.”

Virgilia, it turns out, has been seeing things. Snow on the mountains in April. A bird’s nest where there was none. A man standing in the doorway of her cottage, his shadow falling across the floor. Her childhood nanny tells her she has been blessed with the gift of second sight; Virgilia, who considers such beliefs to be superstitious nonsense, fears she may be going mad.

She consults a psychiatrist, who declares that her experiences fall outside his area of expertise – but suggests an informal chat with his son, Perry, a medical student who has just returned from the US armed with some groundbreaking new theories in psychology. Virgilia’s daughter, Nan, has also arrived to spend some time in Wicklow, and a friendship develops between the two young people which swiftly deepens into romance.

The Unforeseen is a wonderfully seductive read. Born in Dundalk in 1889, Dorothy Macardle was a member of the wealthy brewing family who is remembered now – if at all – for her support of Éamon de Valera and her mammoth account of the War of Independence, The Irish Republic.

She produced just a handful of novels, but you’d never guess it from The Unforeseen, with its finely drawn characters, its deft plotting and its serene sense of place: the landscape of Wicklow has surely never been so lovingly painted in prose. There are flashes of mordant humour, such as the dinner-party scene in which a playwright predicts the likely critical responses to his new political play – “In the Independent you’ll shine resplendent . . . The Irish Press will like you less” – and a subplot involving a Traveller boy which serves to illustrate Macardle’s keen interest in children’s rights.

At the heart of this page-turning tale is the topic of causality. As Virgilia’s “visions” become more troubling, the reader is borne along on Macardle’s merrily bubbling brook of uncertainty. Can the future be altered or is it inevitable? Do our actions have consequences? Is the world a rational place? And is this mother actually trying to destroy her daughter because she seems to be doing a pretty good job of it? That is until the arrival of a twist so expertly, and matter-of-factly, administered it made this reader cheer out loud.

Rumour has it that, at the film premiere of Macardle’s The Uninvited, de Valera greeted a comparable plot twist with the affectionate exclamation: “Typical Dorothy”. It would be wonderful if 21st-century readers were to get to know Macardle’s novels well enough to do the same.