Fragmented fairytales with a feminist twist 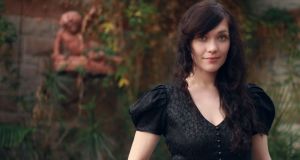 Deirdre Sullivan: The stories in Tangleweed and Brine show tremendous sympathy for and empathy with the women (and witches) at their hearts

“I am a quick and boring little thing. Head down, hair neat, face low. Don’t catch their eye. That’s sauce. And men will punish sauce. They call it love.” Mix sharp feminist observations with lyrical, often fragmented prose and you have Deirdre Sullivan’s Tangleweed and Brine (Little Island, £12.99), a collection of 13 fairytale retellings with tremendous sympathy for and empathy with the women (and witches) at their hearts. Enhanced by Karen Vaughan’s superb illustrations, this is an absolute stunner of a book.

Carnegie Medal winner Sarah Crossan’s latest novel in verse, Moonrise (Bloomsbury, £12.99), tackles the grim topic of America’s death penalty. At 17, narrator Joe hasn’t seen his incarcerated brother Ed in 10 years – but when Ed’s execution is definitively scheduled, he travels to Texas to spend the summer with him, albeit with complicated feelings on the matter. “I’m here cos he’s my blood./ He needs me./ It’s what I have to do./ But if I had a choice?/ I’d be on a plane home./ I’d be gone.”

The nuances of Joe’s characterisation (including a newfound romance and the messiness of his communications with his sister) and the complexity of the brotherly dynamics make this more than just a tirade against the killing of prisoners, although it will certainly leave the reader furious and aching at the injustice of the system. It’s a moving account of sibling relationships, poverty and powerlessness.

Slightly more disappointing is the joint venture by acclaimed authors Joanna Nadin and Anthony McGowan, Everybody Hurts (Atom Books, £7.99). This he-said she-said love story touches on class, privilege and illness, with middle-class Sophia fending off a brain tumour (“the worst bit isn’t so much what it does to you. It’s what happens to everyone else around you.”) and working-class Matt dealing with violent friends and foes.

With a mix of established and new writers, this is, like most anthologies, a mixed bag

The central premise of the book is that they fall in love at first sight (and then complications ensue), which may send romantics swooning but feels implausible on the page. The chemistry that is often built up over the course of a narrative is lacking, while the ongoing threat to Sophia’s life is too frequently dismissed.

The novel also falls foul of a great YA cliche: having modern-day teenagers be mostly interested in music from decades ago and terribly fond of traditional forms (choosing letters and CDs over instant messages and mp3s). While there are sporadic flashes of brilliance, this is an underwhelming romance.

Fiction with a clear agenda often falls short of being satisfying literary work, so titles like A Change is Gonna Come (Stripes Books, £7.99), an anthology of stories from BAME (black, Asian and minority ethnic) British-based writers induce a certain trepidation. Pleasingly, however, this collection more than holds its own in the YA field.

With a mix of established and new writers, this is, like most anthologies, a mixed bag. Occasionally, the urge to “teach” the reader something gets the better of the writer, but more often than not these are skilful and powerful stories. Particular standouts include Tanya Byrne’s omniscient account of a lesbian relationship, Irfan Master’s clever time-travel story, Patrice Lawrence’s innovative tale of a dystopian rehabilitation programme, and newcomer Phoebe Roy’s magical-realist Jewish-infused fable. It amounts to an impressive collection of work from under-represented voices that is both deeply political and passionately literary.

“Mother doesn’t believe in cries for help,” Charlotte, the narrator of Danielle Rollins’s Breaking (Bloomsbury, £7.99), reveals – a lament that may seem familiar to anyone raised by an Irish mammy but becomes sinister when it’s a mother who is also a leading doctor and a powerful influence at a prestigious boarding school.

There is certainly something unsettling about these hunts, and a question mark over what – or who – exactly is the prey

After the suicides of her two charismatic best friends, Charlotte is determined to find an explanation – but she is also benefitting from a mysterious vial of serum that leaves her stronger and sharper than ever before. Can she uncover the truth about their deaths, or will she get distracted by the cute boy? This is a pleasing if not particularly memorable thriller for young readers.

In contrast, MA Bennett’s debut STAGS (Hot Key Books, £7.99) is a gorgeous and compelling romp, echoing Donna Tartt’s The Secret History (and by extension Greek tragedy) in its decision to let the reader know up front that a murder has been committed, among other things. The novel primarily focuses on a half-term holiday at an elegant and ancient country home, in which the clique that dominates the posh boarding school – known as “the Medievals” – have invited a selection of “Savages” to join them for “huntin’ shootin’ fishin’”.

“The Medievals were not straightforward racists; nothing so simple,” narrator Greer reflects. But there is certainly something unsettling about these hunts, and a question mark over what – or who – exactly is the prey.

Despite being a self-identified “Buzzfeed feminist”, though, she can’t help but fall under the thrall of clique leader Henry, and dismisses her suspicions as paranoia. As well as being handsome, he offers up compelling arguments about the technology and social media (that “trolling is the new blood sport” is difficult to argue with) that he and his friends eschew. This is a delicious read.

Finally, Rhian Ivory’s Hope (Firefly Press, £7.99) immediately won me over for its ability – rare among UK writers – to capture the modern Irish dialect without venturing into “Oirish” territory. Riley, the boy in question, serves as love interest to Hope, who’s struggling with derailed college options (“Plan Bs are for people who fail”), ongoing grief, and mental health issues. Her own voice is completely believable and makes this issue-heavy story both authentic and engaging.

Claire Hennessy is a writer, editor and creative writing facilitator