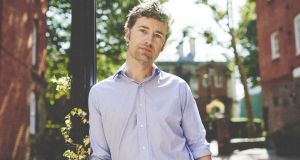 “You were the hero in your dream of saving her, even with everything you didn’t know about her.” Sixteen-year-old Sonny is a romantic at heart, the youngest son of a working-class family in south Co Dublin who watches black-and-white movies with his father and dreams of escaping the poverty and drudgery of 1980s Ireland.

Karl Geary’s luminous debut novel draws us into Sonny’s world with the intimacy of the second-person voice. Life is not easy in the impoverished Knolls household. Sonny’s father gambles his handyman wages as quick as he earns them. His mother is a weary warden, always on alert, wondering where the next meal will come from. Masterfully summed up by Geary in a few paragraphs of backstory in which her brothers cut her out of a measly inheritance, Sonny’s mother is a tragic character whose youngest child can no longer help her. “You had thought often of saving your mother, but saw how you have given up being her hero.”

The need in Sonny to be a saviour finds a new home in the titular Montpelier Parade, where an attractive older woman is battling a very different set of demons. As Sonny hopes for a brighter future, upper-class Vera is marooned in the past. The relationship that develops between them results in a quietly dramatic tale: “The night before, you’d fallen between the cracks of sleep and half-sleep, a restless carousel, excitement, dread, excitement.”

The novel is brilliantly paced, full of tension and tenderness and chance meetings in the suburban seaside location of Monkstown and its environs. Sonny obsesses over Vera with a teenage doggedness that sees him, among other infringements, break into her house. This intensity is matched by Vera’s own erratic behaviour, the reasons for which are slowly revealed with a sense of menace.

The rich, clear prose of Donal Ryan and his affinity for his marginalised characters comes to mind when reading Geary’s novel. Sonny’s plight is pitiable without being maudlin. Geary’s vivid writing gets to the heart of the matter, but he also knows what should be left unsaid.

Born in Dublin, Geary is an actor and scriptwriter who moved to New York when he was 16. His scriptwriting credits include Coney Island Baby and a screen adaptation of Dorothy Parker’s You Were Perfectly Fine. While in New York, Geary also co-founded the East Village music venues Sin-é and the Scratcher. He currently lives in Glasgow with his wife, the actor Laura Fraser, and their daughter.

His debut also recalls Sara Baume’s lauded Spill Simmer Falter Wither. Both books have second-person voices (though Baume’s is directed to a one-eyed dog) and disenfranchised male protagonists making increasingly desperate decisions. Geary’s story harks back to an older Ireland, however, an earlier recession where the economic hardship seems tougher in some ways. Sonny’s family is “waiting to get the phone in”. His father scavenges through the ashtray each evening to get the end out of his mother’s cigarette butts.

The era comes to life with Geary’s cinematic eye: people leaving their back doors unlocked; the painted sign outside the butcher’s of “a smiling pig holding a plate of himself”; the £55 weekly dole that Sonny’s friend Sharon thinks a fortune; the smell of stale smoke in the Adelphi Cinema on Middle Abbey Street.

Drawn from two very different Dublins, Sonny and Vera are kindred spirits because of their shared knowledge of pain. The desire they feel for each other ebbs and flows, a mix of love and hate that is believable and never sensationalist: “You loved to watch her dress, all that desire in reverse, each bit of clothing slowly covering her skin.”

Death and sex are linked from the beginning. In the opening chapter Sonny witnesses a customer getting knocked down outside the butcher’s, and is later unable to stop himself picturing the corpse as he masturbates. The comi-tragic aspect of life is a major focus for Geary, who uses characters such as the sharp-tongued Sharon to inject humour into his story. The banter between herself and Sonny as she simultaneously throws herself at him and tries to safeguard herself from rejection show another character frantically trying to find love and acceptance in a harsh and unfair world.

There is a delightful edge to Sharon, just as there is with both Vera and Sonny. Geary presents his characters in all their glory and weakness, and asks us to love them anyway. Vera’s coldness, Sharon’s impetuousness, Sonny’s violence: instead of being put off by their flaws, we understand where they come from and how hard they are to surmount.

Looking back on his time with Vera, the reflective and heartfelt voice of Sonny renders this classic but dark romance story utterly memorable: “There was a great burning at the centre of you, and the world was somewhere else.”