The Lost Letters of William Woolf playlist: why music is key 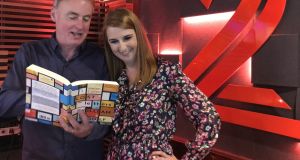 Helen Cullen: Situating the novel in the late 1980s allowed me to revel in the music that I loved from that time – bands that emerged from a musical education that began with my older sisters and was completed by Dave Fanning

One of the great joys of writing my debut novel, The Lost Letters of William Woolf, was undoubtedly creating the soundtrack to accompany the story. This curation of songs allowed me to indulge in the perfect intersection of my two great loves: music and literature.

Writers often invest a lot of time off the page getting to know their characters intimately; the backstories that readers don’t learn, what they dream about by night or fantasise by day. They come to life slowly as the writer begins to understand their habits, neuroses and the banal minutiae that constitute a fully realised life. It is essential that writers know these fictional folks as well as, if not better than, their real-life counterparts.

How that knowledge is acquired, however, is different for every author, I’m sure. Some daydream, some doodle, some write chapters and chapters of exposition that later get deleted everywhere but in their mind’s vault. For me, however, one of the most revelatory moments in my relationship with each character came with the realisation of who their favourite artists were, what music they chose to listen to at pivotal moments in the narrative.

Knowing that William Woolf, my protagonist, was listening to The Smiths as he strolled through Dublin made the whole scene crackle with life for me; I could place myself in the very heart of him. Understanding that Clare’s musical heroine was Kate Bush gave me insight into the longings she nursed in private; the artistic instincts that she was working hard to suppress. Discovering that Winter’s favourite band was The Cure reinforced in me her melancholic disposition, and how art could articulate sadness for her in a way that was restorative, uplifting and ultimately joyful.

There is little in my novel that is biographical or inspired by events from my own life. The one thing that is borne of my own bones, however, is the importance of music to the life of the novel. My great gift to these characters that I developed such empathy for was the music that had been the soundtrack to my own life. Situating the novel in the late 1980s allowed me to revel in the music that I loved from that time; bands that emerged from a musical education that began with my older sisters and was completed by Dave Fanning on 2fm in the evenings. Giving them the perfect song to reflect and reinforce their mood helped me to have faith in the emotional truth of the scenes and deepened my connection with them.

Every day, before I began to write, I would choose a song to listen to that encapsulated for me the energy or the feeling of the scene I wanted to work on. Sinking into the music, the physical world around me would slip away, and I was able to cross the bridge from the reality of life to the imaginary world of the novel. It is a habit that I have continued while writing my second book and it is now an integral part of my writing process.

When one of the songs that accompanied my writing creeps up on me on the radio, or in a bar or the supermarket, I am immediately drawn back into the world of the Dead Letter Depot, such is the power of music to summon memory and transform the ordinary world into an extraordinary sensory otherworld. Like the mixtapes we made and listened to with love in times gone by, the soundtrack to this novel is intrinsically linked now to another time and place that I am transported to with every listening.

The William Woolf playlist is an eclectic one; I believe the soundtrack to any rich life should be. Instead of limiting ourselves to just one genre, or sound, or trend, I think great joy can be found in embracing myriad styles of music. We will always have our favourites, of course. The decade or movement or artist that we identify as our own, but I want to feel free to dance to Madonna with great enthusiasm and also revel in the shivers of Leonard Cohen crooning from a vinyl record. Both valid experiences on different ends of this incredible spectrum we call music.

And so, the world of William Woolf and the Dead Letters Depot too encompasses a diverse musical soundtrack. I would love to think that as readers follow the story, they might pause and look up the songs that are mentioned and play them as they read, to experience the music as the characters do, to activate their aural senses as their imaginations conjure the world before them. If they do, I hope they enjoy the musical rollercoaster and that it deepens their connection with the narrative. The playlist follows. I hope you enjoy it – this one’s for you.

The Lost Letters of William Woolf playlist
1 Chet Baker - Old Devil Moon
2 David Bowie - Wild is The Wind
3 Nina Simone - My Baby Just Cares for Me
4 The Cure - Pictures of You
5 Kate Bush - Hounds of Love
6 Beethoven - Moonlight Piano Sonata
7 Culture Club - Karma Chameleon
8 Sonny & Cher - I Got You Babe
9 Madonna - Like A Prayer
10 The Platters - The Great Pretender
11 Leonard Cohen - Suzanne
12 George Michael - Careless Whisper
13 Michael Dees - What Are You Doing for the Rest of Your Life?
14 The Undertones - Teenage Kicks
15 The Bangles - Eternal Flame
16 The Smiths - There is a Light That Never Goes Out