Reporting the Troubles review: A matter of life and death 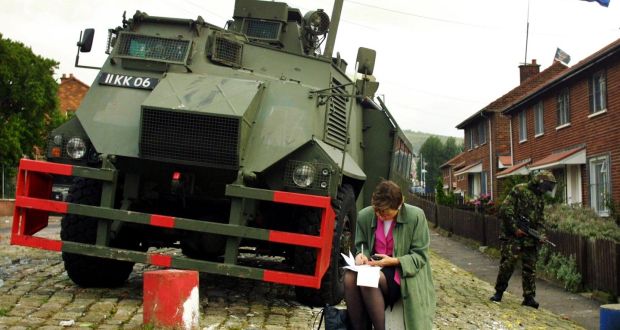 A journalist works on her story in front of an armoured car on the Ardonne Road at the Catholic and Protestant divide in Belfast in 2001. Photograph: Adrian Dennis/AFP/Getty

Do we really need another book about The Troubles after all these years when the stories of everyone who died has been told in meticulous detail in the million-word tome Lost Lives? Mercifully for those in this island the caravan of violence has long since moved on and taken on ever more horrendous characteristics. Now it resides everywhere from Syria to Afghanistan and back again, in a different form, to London and Manchester.

Do we need a book of reminiscences written by nearly 70 journalists?

Haven’t they already had their say many times over?

We absolutely do need such a book and the eloquent reason why is provided by Senator George Mitchell who helped to broker the Good Friday Agreement.

In his introduction to Reporting The Troubles, compiled by Deric Henderson and Ivan Little, Senator Mitchell notes that little has been said or written about “a small group of courageous men and women” – the reporters who through their work made an enormous contribution to the peace effort.

The resulting book will leave a lasting impression and as Mitchell says, “contains accounts of death and life, of loss and survival, of heroism and cowardice, all of which in the aggregate convey the swirl of emotions experienced by those who lived through the Troubles”.

All the big stories are there by those who reported them at the time for newspapers, radio and television. They range from the historic events, Bloody Sunday, Bloody Friday and Omagh, to all the previously unknown villages that were thrust into a permanent notoriety by the atrocities committed there.

Alas, places such as Claudy, Greysteel, Poyntzpass, Kingsmills and Darkley are largely remembered for one thing.

Then there are the bombed bars, restaurants, hotels and fish and chip shops of Belfast, never mind the lethal bombs in Dublin.

Whatever happened, reporters, often at considerable personal risk, were never far behind despite the total absence of modern communication tools. In those days the skill was finding a house with a phone and getting permission to use it.

They were witness to everything from body parts being shovelled up in Belfast to soldiers being shot before their eyes.

These are hardly experiences recollected in tranquillity, more through flashbacks that for some continue to this day, but at least now through the longer lens of time.

Many of the brief chapters – newspaper article length – in Reporting the Troubles are difficult to read without a tear.

One is by Denis Murray, former Ireland correspondent of the BBC, then working for the Belfast Telegraph.

It was St Patrick’s night 1977 in Belfast and Daniel Carville, who was driving near his home in Belfast, died in a hail of bullets shielding his 10-year-old son Frankie. He was a Catholic shot at random.

The next day Murray used a quote from Frankie, which became the Belfast Telegraph headline.

“Why does there have to be bad people in the world. My Daddy was good,” said Frankie.

On that day Murray asked the question every journalist in the Troubles asked themselves: what the hell am I doing in the houses of the recently bereaved, asking questions in the midst of such suffering?

“It was something reporters did, and perhaps at the end of the day, it was all we could do – tell people’s stories,” argues Murray who believes one of the real tragedies of the Troubles are the forgotten deaths.

Every St Patrick’s Day the former BBC correspondent says he thinks of Daniel Carville and Frankie “a wee boy every bit as brave as his daddy”.

Noel Doran, now editor of the Irish News, was one of those who went with trepidation to the door of Gordon Wilson the day after the Enniskillen Remembrance Day bombing. He was invited in and offered tea.

In the interviews Wilson said he forgave the bombers who murdered his daughter and his quote: “I bear no ill will, I bear no grudge”, went round the world and was seen as a pivotal point in the Troubles.

There was real danger for journalists too – journalists such as Jim Campbell, Northern Editor of the Sunday World, who was “technically dead” for a time when he was shot several times in the stomach after answering the door at his north Belfast home.

He had been writing articles about a loyalist murder gang.

Campbell, who still has a bullet lodged in his spine from the near-fatal attack, recounts how earlier he had been kidnapped by the Provisional IRA who thought he was a British spy and later badly beaten up by British soldiers who thought he working for the Provos.

There was humour too – the English journalist who in a Derry hotel asked if he could have eggs and bacon but without the bacon – only to be told bacon was compulsory.

The manager of the Europa distributed half bottles of champagne for journalists “to wash their teeth” when water was cut off by a bomb.

Then there was Sammy Duddy, press officer of the UDA, who moonlighted as a drag artist in his best fishnet tights driving Sam Smyth of the Irish Mail on Sunday on foolhardy visits to loyalist clubs.

Sure, at least at the beginning, many of reporters were young and inexperienced, and there was excitement and adrenaline, and many careers were made as result, albeit it at considerable risk and lasting cost.

But they did tell their stories and knowing the full grisly details of how lives were changed forever and communities split apart, was a necessary part of putting a stop to it.

This Irish journalist who never reported the Troubles stands in awe of those who did, and welcomes this moving book as a tribute, partly about journalists and what they did but more about those they came across in their line of work - living, injured, dead and bereaved.

The last word perhaps should go to Alf McCreary, for many years a Belfast Telegraph feature writer, who experienced the aftermath of Bloody Friday.

“As I get older I become very saddened when I think of those things, and I wonder what all the suffering achieved in the end. I can only hope and pray that it will never happen here again,” McCreary concluded.

We can all only hope and pray that amid the wrangling over Brexit and the Border that McCreary is right and that Reporting The Troubles remains a work of history.