‘Each of us in this world has a story worth telling,’ John Grogan tells students 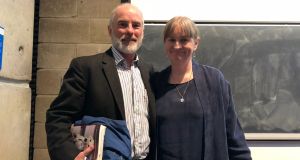 John Grogan, author of New York Times best-selling autobiographical book Marley & Me, pauses when asked what he thinks of Owen Wilson, who portrayed Grogan in the book’s film adaptation.

“He had this odd ability to get inside my skin,” Grogan says, laughing. “He got how I behave as a husband.”

Speaking to a fully booked crowd at Trinity College Dublin this week, Grogan puts on a colourful clinic of storytelling to cap his two-week teaching fellowship at the school.

The evening begins with Grogan sharing excerpts from Marley & Me, stopping at different scenes to provide colourful context not included in the book.

Among the highlights of his storytelling is a poignant - albeit hilarious - anecdote about finding his ageing yellow Labrador Retriever Marley eating sandwich scraps off plates on the kitchen table.

Suspecting Marley had become either increasingly obstinate or hard of hearing in his later years, Grogan called out the dog’s name multiple times to no response. Marley thought he was alone in the room.

Grogan stroked Marley’s fur, causing the pooch to nearly jump through the ceiling. The brief moment of levity soon followed with the realization his yellow Labrador was indeed in his final years, and sorrow set in for the author.

The anecdote captures both the joy and heartbreak of owning an animal; the sadness that pets live only a fraction of the human lifespan.

Tears flow down the faces of audience members, proving Grogan had connected to a universal theme - a central goal for non-fiction storytellers.

“I always thought if I wrote a book it had to be this big story,” he says. “I didn’t realize it was quite literally lying at my feet in my home.”

The discussion that follows with author and TCD director of M.Phil in creative writing Deirdre Madden sees Grogan - a former journalist - stress the importance of keepsakes and journaling in nonfiction writing.

For Grogan, journaling began in high school and continued sporadically before becoming a regular habit in college.

A full chapter in Marley & Me detailing the evening he brought his wife home after their miscarriage was taken nearly verbatim from a 5,000-word excerpt in his journal.

“I’m a huge advocate of being loyal to your journal every day,” he says. “It’s a way to corroborate your life.”

Madden spoke highly of Grogan’s impact throughout the short fellowship.

“We’ve been really happy because he covers such range,” she said, referencing Grogan’s experience in journalism, children’s literature and the art of nonfiction. “The students really loved it. They’ve gotten a lot out of it.”

Audience reactions to the pair’s discussion were just as warm.

“The coolest thing was connecting the real person to everything you’ve always heard about him from the book,” said Amy Cox, a second-year history and politics student from San Francisco. “It makes me wish I was a creative writing student. It’d be really interesting to be in one of his classes.”

Grogan’s takeaway message - to students at Trinity and members of the public attending the discussion - is that no one life story is more important than another.

“I think I hope that people when they come to my talk come away with a sense that each of us in this world has a story worth telling,” Grogan said after the event. “If you’re inclined to write, there’s a story in there that’s waiting to be told.”