‘The limits of the imagination’: The Gate Theatre then and now 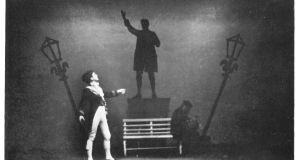 Denis Johnston’s 1929 play The Old Lady Says “No!” questions the cult of martyrdom that marked Irish politics and society at that time.

For lovers of the stage, the sight has been dismal. The past year brought unprecedented hardship to the world of theatre as Covid-19 forced playhouses to close and cancel one production after another, with dire consequences for all involved.

It’s no surprise, however, that theatremakers have bounced back with wonderful ingenuity, creating socially-distanced productions and livestreaming events, even as financial strictures only increased. The Dublin Theatre Festival, for example, went to great lengths to reinvent itself when the second wave of the pandemic hit and managed to salvage part of its line-up in inventive ways. They have since set up a Futures programme that enables artists to rethink the precarious “performing arts ecology”, with 13 productions due in the spring of 2021.

Hopefully, the new season will also see the reopening of the Gate Theatre, which had to abort their run of Nancy Harris’s Our New Girl (2012) last March and eventually cancelled the rest of the year’s productions altogether. The remaining programme for 2020 included reimaginations of two canonical plays, one American and one Irish: Lillian Hellman’s The Little Foxes (1939) and The Shadow of a Gunman (1923) by Seán O’Casey.

This combination of contemporary Irish plays, foreign masterpieces and the nation’s dramatic canon does not just reflect the multiplicity of the Gate’s current artistic principles, but also harks back to its early history. In her statement on the theatre’s closure in March, Selina Cartmell, the Gate’s director, also articulated the legacy she is trying to preserve: “Since the Gate opened almost a century ago, our ethos at the Gate hasn’t changed – to offer a different perspective on theatre, bound only by the limits of our imagination.”

Cartmell’s words echo the ambitions that Hilton Edwards and Micheál mac Liammóir outlined when they founded the Gate in 1928. “The Boys”, as they became affectionately known, played a key role in introducing foreign influences to the Irish stage, and their playhouse quickly became renowned for producing stylistically and dramaturgically innovative plays in a uniquely avant-garde setting. Christopher Fitz-Simon, their biographer, observed that they offered “a kaleidoscopic cross-section of modern European and American drama, at a time when Ireland floated in cultural isolation in mid-Atlantic”.

Yet while the early Gate has often been praised for importing a new repertoire, this only partially acknowledges how Edwards and Mac Liammóir attempted to remedy the insularity of the Irish stage during the Free State years. No less importantly, the Boys also produced the works of exciting new Irish playwrights, such as Denis Johnston, Mary Manning, David Sears, Robert Collis, and their patrons Edward and Christine Longford.

Having grown up during an era of political turmoil and bloodshed that saw the creation of an independent yet bitterly divided Ireland, these writers chose to align themselves with an avant-garde theatre that explicitly sought to establish Dublin as a modern European capital.

The early Gate, then, might more fruitfully be described as a project of what I have called “avant-garde nationalism”, seeking to further Ireland’s cultural development not just by exposing Dublin to foreign drama and novel staging techniques, but also by writing and producing original Irish plays.

The first new creation that they put on was an English version of Mac Liammóir’s Diarmuid agus Gráinne (1928), which had been performed in Irish earlier that year at the Taibhdhearc na Gaillimhe. While the play is certainly indebted to Celtic Revivalism, Mac Liammóir ingeniously infused this ancient tale with Irish revolutionary discourse of a much later period, including references to the 1916 Easter Rising. In this way, Diarmuid and Gráinne transcend their conventional mythological roles to figure as symbols of anti-colonial struggle.

History also intrudes in revealing ways in Edward Longford’s Ascendancy (1935), which is set during Daniel O’Connell’s campaign for Catholic Emancipation in the 1820s. As nerves become more and more strained, one of Longford’s characters desperately pleads for “a country where there will be no more factions and parties, but only Irishmen”. To audiences at the time, who also lived in a strongly polarised society, such historicised appeals for unanimity must have resonated in poignant ways.

Denis Johnston adopted a more radical approach to exploring historical parallels: in his 1929 play The Old Lady Says “No!”, an actor playing Robert Emmet is hit over the head rather too sharply when Major Sirr arrests him. He wakes up in a delirium believing he actually is Emmet and wanders around 1920s Dublin, resolved to find his way back to Rathfarnham and free the nation. This reveals one of the central ironies of the play: would Robert Emmet truly have recognised the Irish Free State as the realisation of the ideal for which he gave his life? At the same time, the play questions the cult of martyrdom that marked Irish politics and society during those years.

The Gate also produced new plays that engaged with other contested issues in contemporary Ireland. Christine Longford, for example, addressed class divisions and religious discrimination in Mr Jiggins of Jigginstown (1933), while the paediatrician Robert Collis depicted the terrible living conditions and the prevalence of tuberculosis in Dublin’s poorer quarters in Marrowbone Lane (1939). Mary Manning was only 26 when, with Youth’s the Season? (1931), she showed what growing up in the Irish Free State meant to a generation “raised in gunfire”. Their “souls [are] lacerated with psychoanalysis” even as “people [are] putting their heads in gas-ovens all over Europe”, and Manning’s characters likewise fall prey to despondency and despair.

There is even a clear parallel to this year’s cancelled revival of Seán O’Casey’s The Shadow of a Gunman in the Gate’s own history. In 1929, the Boys produced David Sears’s Juggernaut, a play about a middle-class family whose moderate Home Rule sympathies are put to the test when they have to choose between aiding or turning in a wounded IRA soldier. Sears had been one of Patrick Pearse’s pupils at St Enda’s and was a veteran of both the Easter Rising and the War of Independence, and he won the Tailteann Games Prize in Drama with this gripping tragedy.

While these original Gate plays were well received in their day, they have since been largely forgotten. That is a shame, because many of these productions were rich, exciting and daring. The early Gate thrived on exchanges between opposites and interactions between conflicting dramatic strategies. As my new book on the Gate shows, Hilton Edwards and Micheál Mac Liammóir promoted these plays to help create a cosmopolitan Ireland that would embrace a wide range of cultural identities and enable different ideas of Irishness to co-exist in a wild harmony. Fortunately, the Gate’s current directorate has taken up their mantle and I hope that theatregoers will soon be able to again enjoy productions there and across Ireland more generally.
Dr Ruud van den Beuken is assistant professor of English literature at Radboud University Nijmegen in the Netherlands. His five-part series of mini-lectures on the Gate’s early history is available via the Gate Theatre’s website and YouTube channel. This article is based on his new book Avant-Garde Nationalism at the Dublin Gate Theatre, 1928-1940 (Syracuse University Press)