Pat McCabe gives the lowdown on ‘the Cootehill scene’ 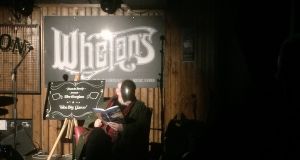 Patrick McCabe reads from The Big Yaroo at its launch recently in Whelan’s, Dublin

A new concept in literature/pop art/entertainment by His Majesty Patrick McCabe, author of Googleboy and The Big Yaroo, ably assisted by his sound recordist, engineer and artistic lieutenant Damien Brennan – be assured that none of the following is to be, in any shape or form, apprehended as “worth anything” or “serious” – except in the manner that Ulysses, The Waste Land(or “yon book on drainage”, as Pete “The Buck” Hughes of The Cross, in Drung,was once upon a time overheard referring to it)might be so considered.

In any case, we here at The Countercultural Art Reinvention Desk, in Co Cavanaghan, sincerely hope that you get something out of it. For, as far as we are concerned, not only does everything depend on “the red wheelbarrow glazed with rain” but if we don’t start carting cabbages and electric spuds in it soon, it may well be already too late.

STATEMENT
In the last 10 years there have been two new tendencies in the arts; towards a fusion of the various art forms and towards an awareness of the need to entertain, and if you believe that then I am afraid you have a very severe case of myopia indeed and are in need of a decent set of Philip Larkin-style jampot goggles, or Eric Morecambe.

The young American artist, Andy Rausenberg, for example, is well-known as a film-maker and also as manager of the up-and-coming Monaghan beat group Fantastic Happening, who have their headquarters in Newbliss, Stradone and a shed in AnnagassiN: with jazz and poetry, so their front man Cue Durgan, attests.

In 2011, Damien Brennan and I presented Crossroads, the very first Cootehill event, with musical set pieces by the Drogheda Solicitor Patrick Goodwin. These mixed-media installations moved the people of the area towards a new involvement with the audience, and later included local groups, like The One Tree Symphonists (led by Eddie Grennan)and Parallax Fayre (in which Mike Crayfield played saxophone).

Both Brennan and I had tried reading to jazz accompaniment and found this unsatisfactory. We came to feel that “beat” music, which is basically meant to accompany words, and is rarely purely instrumental, was a more suitable field for collaboration.

This also includes twirly, fairgound-style country-and-western organ, for which our childhoods are justly celebrated – and three-four tappy, hotel extension drums, which we feel provide a skeletal, Beckett-style effect on many of our numbers.

With Andy Rausenberg initially showing interest, we released our very first record, to some initial bewilderment due to its real-time working-out of complex arrangements and inexplicable tableaux of unidentifiable noises and sounds – it achieved a certain popularity and we were eventually approached by Tullyvin Management. Mackie Donlon is the proprietor.

Our aim is to have a semi-permanent musical/literary/visual art roadshow, which would variously include extra musicians, actors, light projectionists, dancers etc. Who, initially, are likely to be from “the town” but this is not necessary. They could be from China or anywhere, and indeed we have just been approached by a Sufi expressing interest in the possibility of combining the works of Patrick Kavanagh with those of The Freshmen, perhaps best remembered for their Micheál Mac Liammóir-helmed masterpiece from 1972, Peace on Earth.

We prefer to be looked on as a group rather than individuals. We all live in the same house (artistically)and share the same common assumptions: we are hoping for greater possibilities for collaboration within the group, and to reach a new and ever growing audience.

For anyone interested in this nascent project, our next outing will be underneath The One Tree, on the Ballyhaise Road, when Eddie Grennan will be performing the solo from Dark Side Of the Moon on his newly-restored Golden Selmer, with accompanying lyrics by Tom “The Man” Curran (“When I was going down by the lakes/I saw the ducks upon the drakes”), available on CBC 63045.

Any further information required, please at your convenience ring Cootehill 60.

Book quiz: Neville Shute’s On the Beach is set after what kind of apocalyptic disaster?