An illustrated history (or photobook?) of the Emergency and of Irish diplomacy

Sometimes a text cries out to be illustrated; other times a set of images calls for a book 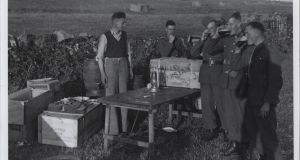 How does one create an illustrated history? Or is that just a fancy term for a photobook?

Large format photobooks (to use that term) can sometimes be dismissed as “coffee table” productions, but it’s a form of publishing that sometimes doesn’t get the attention or respect it deserves. I say this as the co-author of two recent works of that ilk: an illustrated history of Ireland’s foreign policy since 1919; and a more straightforward photographic and documentary history of the Irish Defence Forces during the second World War (the “Emergency”).

Many historians like to talk about using different types of evidence than just the written word; images are perhaps the most obvious, and effective, alternative.

The books in question are very different, but their origins encapsulate the same questions. Where do you get the images with which to create such a book? Very often photographs in a book take the form of an almost tokenistic insert with black-and-white photographs, with only a passing relationship to the text (economies of production play a part in this, admittedly).

Ireland: a Voice Among the Nations was commissioned as an illustrated history of Irish foreign policy for the centenary of the creation of the first Dáil Éireann’s Ministry of Foreign Affairs (the precursor of the modern Department of Foreign Affairs and Trade) in 1919. It was researched and written under the auspices of the Royal Irish Academy’s Documents on Irish Foreign Policy series and was always intended to be an illustrated history with a substantial text.

But the text is, technically, the easy part. What about the illustrations? Diplomacy comes with a certain formality; it would probably be very easy to assemble 200 photographs of men in suits. But how interesting would that look? And would it tell the whole story? It would be useful, but would it have a broad appeal? Nobody writes a book not to be read, and we were no different.

The overall approach became the key: the subject of the book would not just be Irish diplomacy, but the wider story of how the Irish State has engaged with the world. That can, and did, bring in documents and ephemera as well as photos: identity cards, menus, official documents, formal pictures, informal pictures and much more besides.

One had to discriminate when selecting illustrations: a balance had to be struck between images that were historically important, intrinsically interesting, had a geographical spread, and which even just looked too good not to include.

Where did we get them? By scouring high and low through archives at home and abroad (the archivists who maintain records for posterity are the hidden heroes of such ventures). Family heirlooms provided some wonderful material. And it also helps if one has a budget; many repositories will charge a fee, and some, alas, will charge the proverbial arm and a leg.

You have your photos, and you have a text. In an ideal world they will match, but they probably won’t. The material that historians use generally wasn’t left to posterity in the hope that historians would use them. It doesn’t always co-operate. In this case, text and images exist in a kind of dialogue, whereby each complements the other, but both can stand alone, and with the captions stitching the text and images together, while adding another layer of anecdote and analysis alongside the narrative of the main text.

If one wanted to be cheeky about it, one could argue that Ireland: a Voice Among the Nations offers two books for the price of one.

This is the more complex path to an illustrated history, in which the images are, to some degree, pressed into service. There is another way of doing it, and that brings us to the other book.

The Emergency arose from Ireland: a Voice Among the Nations. The chapter that dealt with the Emergency in the latter does so, in keeping with the style of the book, with images that illustrate Ireland’s broader relations in wartime and their potentially devastating impact: crashed German bombers, Éire signs and fortifications around the Irish coast. And these opened the door to the immensely rich image collections of the Military Archives, who responded with enthusiasm when we proposed a spin-off to mark the 80th anniversary of the outbreak of the second World War at relatively short notice.

The simplest way to compile a photobook is to find a discrete collection of images; as is the case with all histories, the evidence must be the guide. While we considered trying to compile a general history of the Emergency, that would have been impractical for various reasons: time, the effort involved, and the fact that not every image one would hope to find exists or can be obtained. But the military collections were vast and could be augmented with other material from repositories such as the National Archives of Ireland, and private collections.

From all of this a theme emerged, and even an argument: the theme was the history of the Defence Forces, and the argument was the reality of the crisis; that neutral Ireland expanded its fledgling military precisely because of the real fear of invasion and devastating attack, and the Emergency was a moment of profound crisis, rather than some kind of caper that shouldn’t be taken too seriously.

With enough material and a sufficiently tight focus, the images virtually arranged themselves into themes and chapters, and the story could unfold: the creation of the Defence Forces, their preparations for potential invasion, how the wider war touched Irish shores, and even what traces of the Emergency remain scattered across the Irish landscape.

These are two books that overlap, that complement one another, but which show two differing approaches to the same end. If one book created its story through images, the other let images create the story it sought to tell. As always, let the reader be the best judge of both.
John Gibney is Assistant Editor with the Royal Irish Academy’s Document’s on Irish Foreign Policy series. He is the co-author (with Michael Kennedy and Kate O’Malley) of Ireland: A voice among the nations (Royal Irish Academy, 2019), and (with Daniel Ayiotis and Michael Kennedy), The Emergency: A visual history of the Irish Defence Forces, 1939-1945 (Eastwood, 2019). All royalties from the latter are being donated to Óglaigh Náisiúnta na hÉireann/Organisation of National Ex-Service Personnel (ONE).