The winter place: from the US rat race to a writing course in Ireland 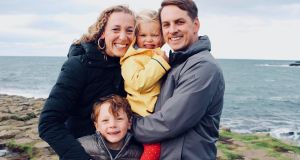 Our life was beautiful, but it wasn’t enough. Our hearts were broken.

Mark came down from putting the kids to bed, each stair squeaking in a different pitch. I was in the den putting away puzzles, stuffing Halloween costumes back into bins, peeling stickers from the carpet. He fell into the couch, and I sat cross-legged in the middle of the floor.

We stared at each other. We were weary, working dead-end jobs that left us strung out, brittle and mean, and there was a feeling I had – this is not enough. It wasn’t enough for him to work 60 hours in a week and dread each of them. And as for myself, was I a writer? The two dark early morning hours I dedicated to writing fiction each day were not enough.

”I need to do some paperwork.”

He hated it so much when I rolled my eyes. There was this silent tension, a thin fog over the floors in every corner of our house.

”I’m thinking of applying to writing programs in Europe. There’s one in Dublin, at Trinity College.”

“Couldn’t we all go? You could quit work, and take care of the kids. I could do my thing.”

Between us, his practicality facing off with my audacious optimism. I waited for a stretch, determined he would speak next. He stared hard at me with a look I hadn’t seen in several years. I’d forgotten that look.

Everything was fine. We had our family, great friends, a lovely house. Our challenges were the normal ones, nothing overtly ruinous – over-commitment, not quite enough money, resentment of our jobs, misunderstandings between us leading to an ongoing strand of petty offences. For years we’d reasoned these things were common. We met when I was 18, married at 23, and jumped into that rushing river of apartment, dog, house, children, careers, more children, bigger house, better job, larger fuller more more in every direction. Now I was 33 and asking him, asking myself, was this what we wanted?

I loved him still. I still felt a pull to the front window, waiting for him on weeknights. I remembered a friend of my mother’s saying, “as long as you can laugh together, you’ll be alright”. Sometimes, lying in bed in the dark, Mark would say something to make me laugh so hard I would be gasping, shushing him so we didn’t wake the kids.

We were replicas of the ideal, but I wanted more. Not more of what we already had. I wanted different. I wanted to start again. How does a family start again?

Vocationally, I was single-minded. Writing novels. Mark came home every day from work empty, not a spark of light in him. He loved to play with the kids. A notion that lodged in me. I was restless, frustrated, stringing together paychecks from three menial jobs to maintain the “standard” lifestyle we’d grown into. He had tried so many times to change course in his career, but there was never any time to power down, think, and imagine something else.

I’d written three books and fragments of others over 10 years, working early in the mornings before the kids woke up, but they’d amounted to icons on a desktop. We’d grown these thick skins. We had become cynics. Nicole Krauss’s observation returns to me: “We met each other when we were young, before we knew about disappointment.”

I hit the bottom when I broke up with the literary agent I’d assumed was my access to publication. The pressure had built to a point I thought I would explode. For days I wrote nothing. I peeled back my fingers, and let the whole thing go.

Opening my hands made space for reckless thinking. This, right now, was our life; we would never get the years back. I would not have a second chance at joy while our children were young, but there was no magic to summon change. We had to make a decision to change.

In the den, after a minute, Mark said, “I do think it’s your turn.”

I applied to programs in English-speaking countries. One success after a litany of failures was enough. The rest of it fell into place inch after inch, though not simply. I was admitted to Trinity. We steered our future eastward to Dublin. I would write; he would get to know the kids. He would rest. I would work harder than ever. Together, we’d slither out of that old skin.

We held onto each other and stepped over the edge. We sold the house. Gave up our jobs. Took the kids out of their schools. Paid off the credit cards. We packed our lives into eight suitcases, stored some, and pitched the rest.

It was the hardest thing we have ever done, together or apart. It’s impossible to convey the bane that was “the logistics” – I’m talking about selling the house, organising health care, finances, academics for myself, and the children. Understanding how to move our money, our phone numbers, our Hulu account. Finding an apartment in a country where we’d never visited and knew not a soul. Packing. Storing. The weeks we lived as migrants when we didn’t have a home anywhere. Leaving our jobs, saying goodbye.

We almost didn’t make it. It was true I sometimes made him the villain when he was moving the earth to get us off the ground. It was true his fear of breaking free chained us both to a life we’d agreed to desert. How painful it was to leave it all behind for an unknown future. How terrified we were, both of us, and feeding our own private terrors in secret because talking about it was too hard.

Sometimes I could barely breathe.

There was a moment, when we were sitting in the middle of High Rock Lake at dusk in my father-in-law’s pontoon boat. I said, “When we started, did you think it would be this hard?” He shook his head. No.

”But, do you think we’re making a mistake?” I said.

Beneath it all, my subterranean fear of being a fool. Asking myself, can this decision be justified? Did I have to justify it?

In the shallows, my insecurity; my longing out in the deep. I focused on it, prayed I could learn to trust it. I was awake, my senses utterly explored. Thinking on a thousand levels, struggling to sleep. All my nerves were exposed. I have never felt so alive as I did when we were tearing with machetes through the jungle of leaving the country. Never blinking; eyes wide open. Something that had been unreachable, suddenly in my hands. I kept asking myself: is this what faith is? Is this bravery? I did not know what was coming, only that it was, and the thought of it filled me with light.

We moved out of the house on a humid day in August. We bid many farewells. I sensed with surprise – delighted surprise – the four of us shrinking into each other even then. We were afraid, overwhelmed, blind, unaware.

I didn’t breathe as we ascended above the gray overcast of the American east into that endless, dreaming blue. We’d done it. Didn’t I believe we would? Now that we’ve left, I can’t remember what it is I thought before.

The children were buckled in their seats, their bodies small in adult spaces. The boy silent and alert, malleable, zipping and unzipping his backpack, his big eyes and ears wide open. And my girl – wild, oblivious, euphoric. Talking to everyone, impatient for their answers, stretching across my lap to see North Carolina for the last time, saying “we are going to Dub-a-lin.”

In both of them, I saw myself. I startled when Mark reached across the aisle and found my hand. We’d been in the dark.

At once a small lamp was lit at our feet. A path. We found bearing. Another lamp, and then another. All the times I’d felt forsaken. I have spent the first 33 years of my life seeking bikini climates, yet now we have moved to Ireland. Hibernia. The winter place.

What is it we want to know of ourselves? That we did not misunderstand. That those lamps at our feet, which lit up step by step, were not tricks of some other light.