A history of the potato: Digging up its fascinating past

In Potato, Rebecca Earle finds that the well-travelled tuber has a chequered past 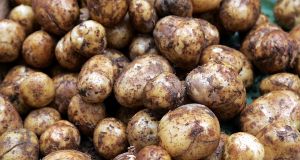 The potato system, Charles Trevelyan wrote, was everything that was wrong with Ireland. Photograph: Matt Kavanagh

“Potatoes are immigrants” declared a poster created by artists Mia Frostner and Rosalie Schweiker in response to the Leave vote in Britain’s 2016 Brexit referendum. From a simple pile of takeaway chips, the slogan highlights the stories of colonialism and global exchange behind even our most mundane items.

In this new volume in Bloomsbury’s Object Lessons series, historian Rebecca Earle offers ideas that go far beyond the seeming simplicity of the humble spud. “Thinking about potatoes,” Earle writes, “turns out to be a good way of thinking about some of the important tensions in our world.” From the roots of poverty and prosperity to the relationship between choice and responsibility, potatoes “help us make sense of our place in the world”.

The potato, now one of the world’s most important crops (alongside wheat, rice and corn), was domesticated 10,000 years ago in the Andes, but “totally unknown to most of humanity before the 16th century”. In the precolonial Americas they were the fruits of Axomama, the potato mother, and across time the tuber has remained associated with earthly and feminine fertility; “poor mamma’s panacea”, Leopold Bloom called the lucky potato he carried with him on his Dublin Odyssey; “a clean birth” wrote Seamus Heaney of relief at a successful potato digging.

Spain’s violent conquest of the Inca civilisation set in train a great potato migration that spread across the world and helped fuel centuries of global population growth. Initially a “quintessential immigrant”, an underground success in cottage gardens and small farms from Galway to Gujarat, in the 18th century the potato became a utilitarian “darling of the Enlightenment”. To European states seeking ways to enlarge and strengthen their stocks of peasants, labourers and soldiers, the potato seemed a golden wonder, lauded still by the UN’s Food and Agriculture Organisation as able to produce “more nutritious food, more quickly, on less land, and in harsher climates than any other major crop”.

Earle imaginatively argues that the potato embodied both a great transition to industrial wage labour and resistance to the new forms of exploitation that transition created; it was both “a cog in the wheel and a spanner in the works”. In Russia its cultivation was forced on serfs by the authoritarian tsars, and despite peasant resistance, the potato still dominates Russian diets to this day. While the Warden of Merton College Oxford channelled Marie Antoinette by saying that even if the 19th-century poor could not afford bread, at least they “rejoiced in potatoes”, the labourers of England’s 1830 Swing Riots told a different story: “We will not live upon potatoes,” their defiant banners insisted.

Their cousins across the Irish Sea did just that, and there the potato was not the vector of modernity but the obstacle blocking its relentless path; an enemy of the state. Although it enabled people to survive even on the most marginal land, to Cromwell’s surveyor of surrender William Petty it encouraged laziness, its availability an “excuse for the people to live in a condition little above that of animals”. “The potato system”, Charles Trevelyan wrote, was everything that was wrong with Ireland.

“What hope is there for a nation which lives on potatoes?” Trevelyan asked rhetorically in 1848, and Earle notes how he and many in the British state saw the Great Famine as “a welcome opportunity to reshape Irish society”, a terrible transformation that has scarred our island since. “Stinking potatoes fouled the land,/ pits turned pus into filthy mounds”, wrote Heaney; “where potato diggers are/you still smell the running sore”.

Yet as Heaney’s other encounters with potatoes – his father digging; he and his mother peeling – show, they can mean hope as well as desperation, comfort as well as trauma. Their divergent stories, Earle writes, help us think “about hunger, about survival, and about our relationship with each other”. In China potatoes were once the food of livestock, the last lifeline for millions during Mao’s “Great Leap Forward”; yet today China is the world’s biggest producer, with government campaigns promoting potato-eating as a sign of wealth, encouraging people to join the smiling “happy potato family”.

The carb’s contrasts continue, with some indicting it as the filler of unhealthy diets while it simultaneously plays a key role in the fight against rising global hunger. Through even our most ordinary food we can find different ways of thinking about the complexities of our world. “From the stony potato,” Earle’s thought-provoking little volume shows, “life rises up.”

Dr Christopher Kissane is the author of Food, Religion and Communities in Early Modern Europe (2018)