As the world transforms, so too must its poetry, disregarding tradition

Makris and Campanello take us to the edge of our ideology, the task of experimental poetry 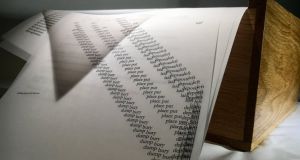 There is a false dichotomy, too often and too easily invoked, between traditional verse and experimental poetry.

I understand where the distinction comes from. Traditional forms and literary techniques respond to the historic role of poetry in Irish society. Poetry has been a tool to hold the stories, beliefs, language and music of a people. It draws us together and is beloved for doing so.

In contrast, newer forms seem more alienating, harder to understand, and almost arrogant in their disregard for that tradition. But what if there is call to disregard certain aspects of the tradition?

Let me offer an example to illustrate the need. Kimberly Campanello’s Motherbabyhome (2019) is a 796-page tome of text that most poets from Chaucer to Heaney would not recognise as poetry. Clearly “experimental”, each page is a mess of words and letters that are sometimes legible but sometimes not. The visual effect can be disorienting. Furthermore, everything in the book is copied from somewhere else: “plagiarised” if you are feeling ungenerous, “found text” if you are familiar with 20th Century avant-garde writing,-or, more properly, part of an emergent 21st Century school of “conceptual” experimental writing, if you really want to figure out this puzzle.

There are 796 pages in the book to commemorate the 796 infants and children who died at the St Mary’s Mother and Baby Home between 1926 and 1961. There is a page for each child – whose lives (and voices) were cut short tragically, whose bodies have been lost to unmarked mass graves. Instead of supporting the unmarried women when they most needed help, the young State shunned and punished them with mortal consequences to their young. A disturbing event such as this requires a disturbing kind of poem.

Rather than tell this tragic story directly, or tell her own experience of the story, Campanello set out to “excavate this archive of voices” as she told RTÉ Radio. Using all available sources detailing the story, she draws in a fuller Irish reaction to the tragedy, capturing how the collective response to “sin” has changed from castigating the “fallen women” to the society that cavalierly permitted children to die.

As one voice notes, “all eyes turned away” – more pressingly, we “can’t even blame the British for it […]our little / Holocaust.” Campanello’s portrait extends into the present and the gradually dawning realisation of what went wrong. One critic is quoted as saying this was “the precise moment in time when Irish people / started / to abandon their religion”.

Experimental approaches to poetry allow Campanello a range of effects and affects specifically responsive to this event. Every page, for instance, bears the name of one child lost in the Mother and Baby Home alongside their birthdate and age at death. This official record of the life, in many cases the only extant evidence of those lives, pulls each page, no matter how discordant, dismissive, confounding or disturbing, back to the stark reality at the heart of the project.

Most harrowing are the pages devoid of text but for the name and dates of the child. The vast, empty pages of this oversized book signal a heavenly silence. The often times bureaucratic gibberish that papers over the deaths in the other pages disappears in the horrible glare of the waste of paper, expressing without words the waste of life. These empty pages are small memorials to babies whose names are otherwise unsaid. The dates are arranged chronologically, thus affording a sweep of time like an arrow pointing to the moment when things finally changed. It is an exact and exacting record of trauma.

If poetry has traditionally sought to unify a people or to express a fellow feeling, experimental poetry offers a means to show fissures in that unity and permits feelings of alienation. As the Irish-American poet Susan Howe writes, “What is the communal vision of poetry if you are curved, odd, indefinite, irregular, feminine. I go in disguise.”

Christodoulos Makris’ this is no longer entertainment (2019) also uses a conceptual writing approach to illuminate fissures in our social fabric. Makris builds his poems from the internet, culling lines and quips from chat rooms, comment streams, and other ephemeral online spaces. In the poems, he connects his collage work to the avant-garde history of similar experiments from Pablo Picasso to Brion Gysin, John Cage to musical sampling in contemporary hip-hop.

In other words, this kind of experimental writing has its own tradition from which to draw and respond. Rather than pursue beauty in isolation, this manipulated found-text tradition makes art of the ugly truth. Tradition is, after all, just a shared preference that lingers over time.

He explains in the introduction that this is no longer entertainment is “formed entirely out of untreated anonymous or pseudonymous text found in the open comments sections of media websites and other digital platforms”. The poet concedes that the book is, in this way, “unauthored” and demonstrates a variety of artful strategies in processing the mess of the internet into an art that sustains its violence, its contradictions, and its attractions.

There is a lot of graphic sex, perhaps inevitably, but because of the way he has decontextualized phrases from their flow, the poems enact a kind of messy sex of language smashing gangly bits into odd juxtapositions. By building from the “language of real men” today, he invites us to consider the implications of daily experience with language: “confused, disappointed, and scrolling to the bottom / we can actually cause genetic mutations simply by watching violence” (“4”).

As befits true art, there is a movement across the collection. The themes of the poems develop from mouth-breathing, porn-crazed misogyny to mouth-breathing, ultra-glib xenophobia. In other words, the moods of the era are mapped out in this core-sample of the internet where “we watch them pretending to be other people / speaking other peoples words […]why the anger? / it’s easier to be snide and anonymous” (“71”).

This is poetry because it uses language to store a complex network of ideas about the age in which we live. Like the best of Ireland’s literary tradition – the canonical tradition of Swift, Wilde and Joyce – it also highlights the hypocrisies of our age. We use the language of inclusion and tolerance, while permitting casual racism, sexism, and xenophobia.

Makris’s project also bumps into the limits of what constitutes tolerable artistic practice. The UK publisher was obviously comfortable publishing a collection of found or artfully-plagiarised text that challenges the boundaries of acceptable authorial practice (hence, avant-garde), but yet still found it necessary to put in a disclaimer in the colophon: “These poems are a work of fiction. The names, characters and incidents portrayed in it are the work of the author’s imagination.” Are the poems, then, “untreated” as the author suggests or entirely of the author’s imagination as the publisher insists? The colophon also reminds readers that though made up of plagiarised text, “No parts of this publication may be reproduced.”

I believe this hypocrisy in the literary industry, in how we experience and perform language in Capitalism, is at the heart of Makris’s documentary. We want to experience commonality, that national sense of belonging, just as we want free access to the best ideas percolating across humanity.

The kind of conceptual poetry I have highlighted here documents intense and essential limitations to that commonality, to that aspirational freedom. Taking us right to the edge of our ideology is the proper task of experimental poetry, as in Makris’s work, as in Campanello’s work. This kind of writing that gives up the nationalist illusion of commonality to expose the fault lines of a society is particularly necessary in an age of complex social turbulence on the precipice of even further changes. As the world transforms, so too must its poetry.
Gregory Betts is a professor of English language & literature at Brock University, St Catharines, Ontario, Canada and recently served as Craig Dobbin Professor for Canadian Studies, University College Dublin