The ‘hidden’ Armenians of Turkey

In the land of the fortresses: why they may still feel compelled to conceal their identity 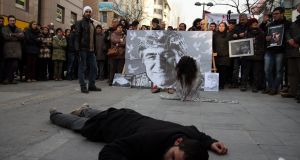 A dramatisation recalling the murder of Turkish-Armenian journalist Hrant Dink in 2007. Several thousand protesters in Ankara’s Kizilay Square chanted “We are all Hrant Dink” and “Murderer state will account for this”. Photograph: Tumay Berkin/ Basin Foto Ajansi/ LightRocket via Getty Images

My first concern was timeliness. As I began to write Secret Nation: The Hidden Armenians of Turkey, I felt that, by the time the book was published, these Armenians would have freely revealed themselves as such, in a newly tolerant society. Courageous voices in Turkey had been challenging official dogma for the last few years. Hrant Dink had been toppling taboos for a decade from the pages of Agos, the Armenian newspaper of Istanbul he was the publisher of until January 19th, 2007, when a nationalist Turk gunned him down outside his office.

But the collective response to his assassination had been stunning. A crowd took to the streets of Istanbul with signs that read, “We are all Armenian, we are all Hrant”. Surely not all of them were Armenian. When a few years later I asked the staff at Agos how it was possible to print all those signs less than 24 hours after the murder – if only to put to rest conspiracy theories that had been swirling until then – they told me that a Turkish printer of progressive views had undertaken the job on his own initiative. And yes: most in the 100,000-strong crowd that took part in Hrant Dink’s funeral procession were non-Armenians. They were Turks, Kurds and people of all ethnicities, religions and walks of life in Turkey.

That was a watershed. It led to a major change of perception especially among Diaspora Armenians, mostly descendants of Genocide survivors, for many of whom the name of Turk or Turkey was unmentionable. The outpouring of sympathy and grief over Dink’s assassination was auspicious for a possible dialogue between Armenians and Turks, at least at the grassroots level.

My second concern was about the very people I wanted to write about. Who would qualify as an Armenian after a century of genocide, mixed ancestry, conversion to Islam, and assimilation? And who was I to judge? At a conference on Islamicised Armenians in Istanbul in 2013, Ishkhan Chiftjian, an academic based in Leipzig, referred to this dilemma with an analogy to another poignant ignominy in the very long aftermath of the 1915 massacres: were the ruins of Armenian churches all over Turkey still Armenian? Could an Armenian church turned into a mosque still be considered Armenian, or a church?

An unrelated conversation a few months later with Alina Aghajanian, a microbiologist from Los Angeles, offered me a clue. There were, it dawned on me, no pure species or specimens in nature. No rose in the world is true to the archetype of the rose.

That is also true of identity. No man is the man, and no Armenian is the Armenian. Identity is a variable quality. And people may acquire or shed identities over a lifetime.

Indeed, in some regions of Turkey, where Armenians feel safer under the many guises of national, ethnic or religious dissimulation, original and acquired identities may coexist like the layers of an onion. An extended Armenian clan I became acquainted with, originally from the province of Adiyaman in southeast Turkey but scattered all over the country, seemed to encompass all the possible strands of political and religious identity present today in Turkey.

Among them, there were members of the Apostolic Armenian Church. Others, in a town that used to be part of the ancient kingdom of Commagene, were affiliated with the Assyrian Orthodox Church, with cousins who were observant Sunni Muslims. The clan included at least one high-ranking official in the HDP, the Turkish acronym for the leftist Peoples’ Democratic Party; there were also sympathisers of the ruling AKP, President Recep Tayyip Erdogan’s Justice and Development Party, of Islamist and right-wing tendency. One in the family died in combat against the Turkish army fighting for the PKK, the Kurdistan Workers’ Party, a guerrilla group. A relative of his in this endogamous family – with marriage among cousins, a common practice in Anatolia – was said to be a member of Hizbullah, a far-right, Sunni Islamist armed group in Turkey (not to be confused with the homonymous Shia militant group of Southern Lebanon), even though I was unable to confirm this. Armenian and Turkish, as well as Kurmancî Kurdish and Dimi or Zazaki, are all spoken in this clan.

The genocide was the immediate cause for the multiplicity of religious and political currents in this clan. Yet their province had been the quintessential land of dissimulation since antiquity. In the 1st century BC, king Antiochus of Commagene had added the epithet of philoromaios philhellene (“friend of the Romans” and “friend of the Greeks”) to his title, while he claimed descent from the royal houses of Armenia and Persia for himself.

Arsen (not his real name), a member of this clan, accompanied me to see the grandchild of Ramazan, the Kurdish man that had saved his grandfather, Minas, during the genocide.

What was already a horrific situation in 1915 turned into a harrowing nightmare for Minas: Turkish soldiers forced him to strangle his younger brother, Garabed, who was 10 at the time, while they were wandering by the Euphrates in the days following the massacres in their hometown of Olbi, Adiyaman, the only survivors in their immediate family. Minas threw Garabed’s body in the Euphrates and fled, maddened. He then found the protection of Ramazan in a nearby town, which the onslaught of history has reduced to a village, now almost a hamlet, under the shadow of the unassailable ruins of a Commagenian fortress.

But this fortress was fundamentally different from the Turkish military bases to be found all over the country, as I wrote in Secret Nation:

Sometimes those bases are separated by only a short distance. Deep inland, these fortified outposts are not against any external enemy. Unlike the citadels and fortresses from antiquity and the Middle Ages that dot the land, the contemporary ones do not protect it from invaders, but assert the power of the state, by the state and for the state, but not necessarily for the people. These bases are potentially or actually against the people.

Our talk with the grandchild of Ramazan turned to the question of why there was still a sense of latent violence in Turkey. As the conversation progressed it became clear that the Turkish state had the capacity to withstand bloodletting on a massive scale. Moreover, the grandchild of Ramazan suggested, it was the Turkish state’s demonstrated capacity to unleash unsparing violence on its own population – Armenians yesterday, Kurds today – that held the country together. Turkey, he implied, was bound by fear.

Only then I understood why some hidden Armenians I met in villages of historical Armenia – now the scene of Kurds’ protracted guerrilla warfare and Turks’ counterinsurgency – would caution me not to take it all at face value when I expressed my incredulous joy at the freedom to discuss the genocide and history openly in Turkey.

Then I read a historical document that helped me understand the anxiety I noticed among those Armenians in the liberal atmosphere of Turkey in the first half of this decade. In August 1908, Mihrdat Noradoungian, an Armenian intellectual from Constantinople, described a sense of collective perplexity at the freedoms that the Young Turk revolution had brought about only a month earlier:

Though during 15 years a lot of blood has been spilled, there was the fear of greater bloodshed which did not happen. One should know that this [bloodshed] has become a natural law and that natural laws are unavoidable. Whatever did not happen in the beginning could still happen. Whatever the revolution did not do, the counterrevolution will be able to do […]

Perhaps it was too awkward to confess, but it was the abnormal absence of violence what was making the Islamicised and hidden Armenians so uneasy at the time I was travelling undisturbed in Turkey. They felt as Armenians and others did in 1908, as Noradoungian noted in his premonitory article. It could not last then, and it did not. It could not last a century later, and it did not either.
Secret Nation by Avedis Hadjian is published by IB Tauris, at £25