‘Grace’, an award-winning novel about the Irish Famine, is this month’s Irish Times Book Club selection 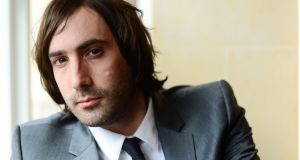 Paul Lynch: ‘I had a negative self-image of the Irish during the famine.’ Photograph: Bryan O’Brien / The Irish Times

You mentioned to me that it is often the books you don’t want to write, or are afraid of writing, that are the books you have to write. What was it about this idea in Grace that you were so resistant to in the beginning, and what was the moment or idea that finally made you surrender to it?

I spend months, sometimes years, in complete denial, trying hard not to write the novel I end up writing. My stories and themes are not consciously chosen and are often to do with problems I’d rather not address. Joseph Campbell has a wonderful line: “The cave you fear to enter holds the treasure that you seek.” You have to slay the inner dragon, and with Grace, of course, I had to face the Irish famine. I mean, why go there? The book has an epigram from Dante and for good reason: “Who, without death, dares walk into the kingdom of the dead?” And yet, I found myself with a powerful feeling for a character – a 14-year-old girl who became Grace.

When I wrote those first few pages, I realised to my surprise she was the daughter of Coll Coyle, from my first novel, Red Sky in Morning, and that her story would take place during the famine. So I resisted for a while until I gave in. What I was finally willing to face were the very reasons I did not want to write about the famine. Like many of us, I had a negative self-image of the Irish during this period. We are happy to deal with the famine in the academic abstract, but the lab work of the novelist is to measure what is in a human being, to measure human experience. Why are there such deep feelings of shame, anger and denial in the Irish psyche? I felt that no novel had yet opened this problem down to the bone.

I am really interested in how the initial seed germinates. With regards to the language, to say it is melodic and poetic would be to sell it woefully short. There are times when the emotion of the thought was so powerful it bowled me over, and I would read and reread phrases just to wallow in where the image brought me.

At what point does this language and its rhythms come to you? Do you feel this is an evolution of your previous novels or does each one emerge with its own unique melody?

Every book teaches you how to write it, and I spend months on those first few pages, teasing out its song and its rhythms. Virginia Woolf once said that style is rhythm and I believe that to be true. With Grace, I found her to be such a spirited character, that though the book is written in the third person, the writing sits very close to her so that it is coloured by her feelings, her moods, her intensity.

Was there any trepidation about making your main character a 14-year-old girl?

Every character makes you nervous. And Grace is such a quiveringly sensitive character I really had to take my time with her. She is so intuitive and self-conscious and feels everything deeply. She is also a touch melodramatic. And yet, during the writing, she spoke so very clearly. I just had to listen. My wife is my first reader, and after she read it, she said, “You got her perfectly, but how did you do that without asking me any questions about what it was like to be a teenage girl?” The truth is, I don’t know, I just went with it, though I might say that the job of the novelist is to make things up!

One of the most deftly woven aspects of Grace is that while she endures the most unspeakable horrors to survive, she cannot halt her growth into womanhood and all the physical and emotional changes that brings. How difficult was it to intertwine these two threads?

It’s really about the weave. We all believe our lives have meaning, and yet the world is vast, silent and indifferent. There is a tug of war in my writing between this belief in the individual and what I think of as absolute reality. And in Grace that presents an opportunity for humour and irony. Here she is, trying to survive within a collapsing, starving society, and at the same time, her body is entering its womanhood, with its attendant trials and embarrassments. If that weren’t problem enough, her brother is whispering in her ear, mocking her for her shame.

Colly is such a delightful, vital character and so essential to the narrative. Did you always know he would leave the story when he did, or do characters sometimes surprise you with their path?

Everything about Colly was a surprise. I had no idea who he was, until he came storming into the narrative when Grace was having her hair shorn. I had no idea what was to happen to him by the river. Or how he would return. I was stunned when he came back, and in the manner that he did. And you are right, he is so vital to the story that he had to return. Grace could not do without his company – his little riddles, his raucous wit and the fact that he is always looking out for her, so some part of her mind had to summon him.

When Grace enters the mission, the book takes on a very different feel. Where did the inspiration for this section of the book come from?

The Irish flocked to the priesthood, the nunneries, and the Catholic Church after the famine. But I had a hunch there would have been other movements too – smaller, cult-like millennial sects that arose out of the catastrophe, where the end of days and the Second Coming of Christ were preached. It seems to be very common that the lower classes blamed providence, the hand of God, for the famine. You could also look at it that some part of Grace dies in the section called “Crow”, that she is resurrected or reborn into the mission, and they do treat her like a miracle. I also had in mind a spiritual arc. I wanted, somehow, to craft through Grace’s adventures the journey in Ireland from a la carte Pagan-Christianity, to Catholic theocracy and beyond, to the secular society we are now.

You mentioned that there are few to no first-hand accounts of life during the famine of ordinary Irish people. That shame kept people from speaking about their survival. However, the issues of displacement and famine are not unique to 1847 Ireland. Did your research include more modern atrocities for personal accounts?

Before I knew I was writing about the Irish famine, I was deeply interested in Mao’s famine that took place from 1958 to 1962. Totalitarian communism missed nothing and recorded everything. When the archives were opened they revealed the full horror of what went on. It would seem obvious that during times of enormous distress, human behaviour defaults and that our darker side emerges – the part of ourselves we would like to pretend does not exist. But, of course, it does, and it is there within every one of us. Grace, to her dismay, discovers that too.

The last three words of the book are so beautiful and simple, yet powerful enough to soothe the heartbreak and pain of the previous 368 pages. Can you speak to that? How and when they came to you?

I knew the last words of the book from very early on. I needed to write towards that light and seeing it allowed me to step fully into the darkness. The book has an epigraph from TS Eliot’s A Song for Simeon that I drew inspiration from:

My life is light, waiting for the death wind,
Like a feather on the back of my hand.

“Light”, for me, is not just the lightness of human life when caught within the winds of fate, but also its luminosity. I think of the radiance within each individual and how precious that is. These two meanings combine for me into a sense of grace.

Rise of the killer robots: The future of war
4