An Ocean of Minutes by Thea Lim review: a timely debut novel 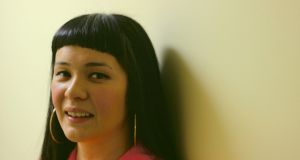 Thea Lim: creates a vibrant, dystopian world in her writing

Book Title:
An Ocean of Minutes

In 1980s America, a deadly pandemic has gripped the country. Medicine to stop the virus is so rare that those who want it must have someone in their lives willing to make a huge sacrifice. Enter Polly Nader, a 23-year-old heroine from Buffalo, who chooses to participate in a sketchy time travel programme in order to save her fiancé Frank. The TimeRaiser initiative she signs up to hopes to mitigate the virus by sending people into the future to prevent further outbreaks and rebuild a broken country.

Like the best dystopian worlds, Thea Lim’s debut resonates with the present. Families are rent apart because of momentous world events. In 1981 people are dying in such numbers that the value of a single life has lost all currency. In 1998, the year which Polly travels to, conditions are equally grim. The time travellers are prisoners in everything but name. Given visas based on their skills, they carry out years of work for pittance in order to gain their freedom. The country, meanwhile, has split in two – a self-contained north and a plague riddled south – a world where soulless officialdom and aggressive policing contrasts with the scale of human grief, a new nightmarish America that is horribly recognisable.

Lim’s lucid language establishes Polly’s predicament from the off as she leaves Frank in quarantine in Texas and heads to Houston (one of many neat references) for take-off. The sense of panic among the time travellers, who are herded from one bureaucratic nightmare to another, is clear. Information is thin on the ground and all around the airport, people are regretting their decisions. A woman in line beside Polly suddenly breaks down: “It is an unacceptable noise. It triggers an avalanche of dread that comes plunging over Polly, and her ears and airways fill with it, and for a second she is too heavy to move. The only way she can get out from under it is to narrow all her emotions into a fine point of rage. She wants to scream at the woman, Do you think you are the only one suffering here?”

Intense early chapters skilfully show how humans react in extreme situations. Armed with the loosest of plans to meet Frank on a Saturday in 1993 outside a hotel in Galveston, Texas (if he survives the pandemic), Polly’s courage in stepping into the unknown is revealed in intricate detail: “Her gut crowded with sudden, childhood fright, her capacity for the strange exceeded”. Once she lands in the future, five years later than planned, reality hits home: “There was no socket for a radio, no books. Her room was the size of a large sandbox.”

There are also no friends, no family, no fiancé, and an uphill battle to discover what happened to all of them. With this suppression of information, there are overtones of 1984, though Lim’s novel is far less sinister. It offers instead a believable representation of how a modern country might deal with a pandemic. No rats strapped to faces are needed here, the banal efforts to reconstruct a nation are chilling enough.

Lim grew up in Singapore and lives in Toronto with her family. She holds an MFA from the University of Houston and her writing has been published by the Southampton Review, the Guardian and Salon. There are echoes of Laura van den Berg’s Find Me and Audrey Niffenegger’s The Time Traveller’s Wife in her debut novel. The latter comes through in Lim’s examination of love’s durability through crisis and time. As she pines for Frank, Polly wonders “how love could neatly and unremarkably stop; that was more impossible and terrible than travelling through all of time”.

A shift to the first person in a short section towards the end delivers the depth of feeling Polly feels for Frank. It leaves the reader wishing for a similar voice from the beginning in a story that can sometimes be more about its themes than its characters. Scenes feel rushed at times as Lim fights to cram in her myriad ideas and subplots.

But there is no denying the author’s ability to create a vibrant world and predicaments for her characters. “You’re not a citizen anymore,” an official responding to Polly calls to mind the plights of today’s migrants. “You left before the formation of America, ipso facto you can’t be a citizen. You’re here on a visa.” Polly’s attempts to get information about Frank’s whereabouts are met with motivational double speak: “Today is the first day of the rest of your life, and you have a chance to begin again.” Her arduous trip north across the border in later chapters, “five days in a sardine can”, culminates with a dehumanising encounter with border control. An Ocean of Minutes is a timely novel that brings a fresh perspective on the complex subjects of migration and displacement that plague our world today.