The best graphic novels of 2018 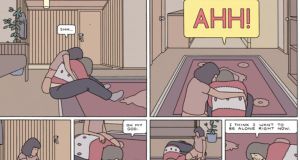 Detail from Sabrina, which was the first graphic novel to be shortlisted for the Man Booker prize

“God blesses your soul with grace. Batman punches people in the face.” If there were a single statement that summed up the variety of comics in 2018 – for all their cheap thrills, weighty themes and dramatic heft – this might be it. During a year in which five of the top 10 grossing films were based on Marvel properties, the medium’s primary colour heroes were inescapable for pretty much anyone with eyes and a pulse, but 2018 also saw the first graphic novel to be nominated for a Man Booker prize, and a swell of indie and small press releases which, inexplicably, improved on last year’s bumper crop.

To begin with those in capes and cowls, the above quote came from one of the year’s most enduring pleasures, Tom King’s Batman. As with last year, King’s other monthly DC title Mister Miracle (with Mitch Gerads) continued to astound and confound, but it was with the dark knight we got his biggest treat this year, specifically Batman #51-53, featuring art by Lee Weeks. In the space of three issues, King spins the sort of intricate procedural web that’s made his writing damn near unmissable for many years, asking what would happen if Bruce Wayne was on a jury tasked with adjudicating one of Batman’s vanquished foes. The answer is more interesting than you’d have any right to expect, mapping the frontiers of Batman’s ethical landscape in a way that shows just why the character has endured for so many decades.

There are thousands of Batman comics, with at least half a dozen active in various monthly iterations. Taken with the film, TV and game adaptations it can be a dizzying and inconsistent path to tread. To read King’s Batman as an uninitiated reader is to get what all the fuss is about; to read him as a fan is to remember why all that fuss was made in the first place.

Immortal Hulk by Al Ewing and art by Joe Bennett takes an old complaint levelled on the more powerful characters – they can’t die so what’s the point? – and turns it on its head. Bruce Banner discovers a bullet to his brain, in fact any fatal blow, will kill him, but the Hulk will rise again, rendering both immortal, and pitching this entertaining series closer to a horror of possession and personality disorder than your typical super-book. Immortal Hulk does what the best series do for their long-running heroes; it shows you a brand-new side to a familiar character that feels, somehow, like it’s always been there.

A lot of comics get termed funny for prompting little more than a wry smile via the odd witty aside. Ryan North’s Unbeatable Squirrel Girl is most assuredly not one of those comics. While some titles shake out a smirk or grin from time to time, USG is so consistently, fizzily mirthsome, it’s almost unfair to the competition. Nowhere was this better evidenced than in this year’s 31st issue, when Doreen (our titular rodent) and her friend Nancy are trapped/liberated in a time-freeze, which allows them to move at hyper-speed through a frozen New York, cramming a lifetime of superheroics in one weekend. The result is one of the most well-written, hilarious and gosh-darn-it charming sequences of storytelling you will imbibe all year. If you haven’t caught up on the whole run, get on it now before two Squirrel Girl-fronted TV shows debut next year.

At Image, mega-hit titles like Monstress, Head Lopper and East of West remained unmissable, while the world’s favourite space opera Saga continued to be the industry standard for high-concept thrills. Five years going, it can be easy to overlook Brian K Vaughan and Fiona Allen’s achievements in the field, or to gloss over Saga’s continued excellence as simply more of the same. The fact is, the boundless imagination of Image’s darling should be restated and celebrated at every opportunity. Elsewhere, chief among the imprint’s new delights was Sarah Vaughn and Leila Del Duca’s Sleepless. Conjuring a gripping world of scheming regents and scurrilous palace intrigue, Sleepless winds itself around its fantasy premise like a whodunnit. And, with its painterly patterns and textures, it may also be the most beautiful comic on sale anywhere.

Similarly gorgeous is Matthew Erman and Lisa Sterle’s horror-tinged family drama, Long Lost (Scout Comics) in which two sisters return to their hometown Hazel Patch, “an aimless void where people never leave because there is nowhere else to be except here”. There may be something else keeping the population in check, as this dark fable of undead magic and familial trauma progresses. These messy dynamics are realised with pitch-perfect dialogue, and the undead world of monsters is stunningly rendered by Sterle’s clean, painterly lines. If it’s somehow passed you by, please be assured: Long Lost is some find.

Genuinely funny books were in rich supply this year, and Why Art? (Fantagraphics) by Eleanor Davis was among the best. It begins as a silly pastiche of art school tropes, gently sending up ludicrous art styles and fashions with exquisite penmanship. As it develops, however, her field guide to the oddities of the art world become more warm, wise and life-affirming than a series of cartoons about shark attacks and giant paper mache heads has any right to.

Staying with mind-expanding indies, it would be great to review a work as resolutely original as Tillie Walden’s On A Sunbeam (Avery Hill, First Second) without lapsing into trite platitudes. Walden, who impressed so much with 2016’s A City Inside, has returned with this spellbinding space opera love story. Within this strange universe lies a familiar story of fitting in, first love and the trials of living on a gigantic space cat that visits cosmic ruins. Yes, it’s trite to say so, but this is the kind of book for which the word “otherworldly” resolutely applies.

Elsewhere, Sabrina by Nick Drnaso (Drawn & Quarterly) is the first graphic novel nominated for the Man Booker prize. While you’d be right to wonder how it’s taken this long, any scepticism regarding their choice should end there. Sabrina is, nominally, about the abduction of the titular character, but we never witness this event. Instead we see its effects on her boyfriend and others around her. It’s a book so steadfastly resistant to standard narrative expectations, it can often seem odd that certain passages were left in, so incidental the plot, so seemingly irrelevant the dialogue. In the end, all of it matters, and the great big insoluble whole coheres into something larger still; a wide-scope of view of life, or something like it, persisting after harrowing trauma. Sabrina is the kind of book that stays after reading until, that is, you decide to read it again to find what little things you missed.

“When you stop talking about one conspicuous thing in a family,” writes Michael Kupperman, “you stop talking about any conspicuous things in the family, it’s like a form of rot”. Last year, few works were as poignantly well-crafted as Thi Bui’s The Best We Could Do, and this year’s best may be another fascinating parental memoir, the deeply affecting All the Answers (Simon & Schuster). Kupperman made his name with humour anthology series Tales Designed To Thrizzle, some of the funniest comics released this century, so it may be surprising that this is among the century’s most affecting. The story of his father’s experiences on Quiz Kids – a US trivia radio program hugely popular in the 1940s and 1950s – the book details the excitement and, later, alienation he experienced due to its monumental success.

Kupperman’s old-timey woodcut style, which has worked so well as a comic foil in his other works, proves devastatingly apt for this tale of stilted communication and emotional disconnection. Filled with bizarrely huge cameos from the most famous people of the era – Abbot & Costello gift him a dog while JD Salinger devotes a line to him in a novel – it’s the smaller moments that stand out, not least the most heart-breaking response imaginable for a son who’s asked his father if he loves him; “some of the time”. In the end, we never do get all the answers, but those we do get are delivered with an unflinching heart, and uncommon brio, that marks this as one of the year’s very, very best.