Alice Leahy's memoir reviewed: a soldier in the service of love 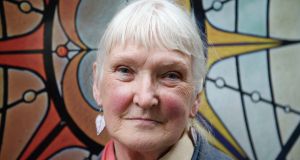 Book Title:
The Stars Are Our Only Warmth

This is the story of Alice Leahy, and a book about the beauty and dignity of human beings even when cloaked in poverty, addiction or mental health problems.

Place is not just location but is as much a lived history, and the lyrical rhythm described by Leahy of her childhood home in Fethard, Co Tipperary, with all the vivid characters who lived there, evokes a place, a people and a way of life now gone. There never is a golden age or time, and recollection can discount the experience of adversity, but the childhood she describes is – and was – a golden place for her.

When she came to Dublin in 1960 the world of writers Patrick Kavanagh and Brendan Behan had passed or was passing but the principal pubs and watering holes were there in their permanence, looming as landmarks, fixed as lighthouses or cathedrals. The Dublin of the little hospitals, of junior doctors on long shifts, the hierarchical rigidity and the hidden anarchic subversion were all as described. To read it as one who was part of it, was like putting on an old cardigan again and feeling the comfort, smells and familiarity of it all.

The stories speak of nurses who made the care of patients the centre of their lives, who gave so much for so little and whose contribution was taken for granted and forgotten. The acute sensitivity and exquisite insight that Leahy clearly had for everyone, the poor patients, the hospital cleaners, the other nurses and those seemingly austere and aloof matrons, mark her out as one set apart.

Here is a record of her journey down through the years in the company of those who lived, unwanted and unseen, upon the streets of Dublin and in its doorways. The looming edifice of Iveagh buildings, the old Dublin of Lord Edward St and all the surrounding areas is redolent of a grimy dampness and the smells of poverty that hang in the descriptions. The heroic people both housed and homeless who she encounters are chronicled as entries in a ledger book of dignity, respect and love.

Leahy is an outsider herself and it is clear she likes it like that but, standing separate as she does, she makes a bridge to those much further out than she and brings them back a little from their exile. Hers is not a sentimental story but a gritty adamantine determination to bring to the tribe of the disaffected comfort in the face of bleakness. She is not out to change people or to pry into their lives and the choices they have made. She makes it her mission to give the basic needs of comfort, care and respect and if they share their stories that is received in a centred place, heard and not judged.

In her battles with authority, her ability to find allies among the bureaucrats, her engagement with committees and her use of the media it is clear there was no avenue she would not explore on behalf of her people. She saw the dreadful logic of the matrices of crime and prison, addiction and violence, homelessness and deprivation, loss and injury and railed against them.

This is a rich and full account but yet there is a piece held back. The open and generous gift of a life lived in the service of the dispossessed still has need of a personal space and Leahy remains enigmatic and private, despite a life’s work out on the streets of Dublin and in the public eye. What you do see is the undaunted warrior, the difficult agitator, the practical nurse, the decent woman tender in compassion. This is not the story of a saint but someone far better, a soldier in the service of love. But it is more than that. It is a great read and a great gift for Christmas.

The proceeds of this book, written with journalist Catherine Cleary, go to the Alice Leahy Trust.