Over the Backyard Wall and The Theatre of Thomas Kilroy reviews 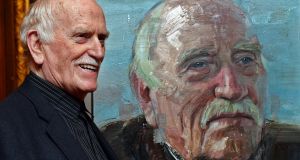 Thomas Kilroy with his portrait, by artist Colin Davidson, at a reception at the Abbey Theatre Dublin. Photograph: Eric Luke

In 2006, when he was 72, Thomas Kilroy had an operation to remove cataracts from both his eyes. He found, as expected, that his sight improved remarkably. What he did not expect is the startling change in his capacity for memory. It had not been good: “I could scarcely remember what happened the previous week, never mind the distant past”. Now, suddenly, “I began to see memories as something directly in front of me, not something behind in the past. These images were not in any continuous chain of happenings but in vivid shards, splinters, sometimes with missing details so that, at times, I wondered if I were losing it”.

This is not, apparently, an unprecedented phenomenon: Kilroy points to Cataract, a little book from 2011 by the great critic and writer John Berger, in which he describes a similar experience. But it seems, in Kilroy’s case, almost eerily apt. Kilroy is Ireland’s greatest living dramatist. And his work, in the 50 years since the premiere of his remarkable The Death and Resurrection of Mr Roche, is all vivid shards of Irish life, splinters off the grand historical narrative, missing details filled in through the imagination. He is a master of recovery and rediscovery: the figures he has most potently brought to the stage – Matt Talbot, William Joyce (Lord Haw Haw), Brendan Bracken, Constance Wilde – are ones who have slipped through the cracks of official memory. So what happened to him couldn’t have happened to a more appropriate person.

“History,” Kilroy writes in Over the Backyard Wall: A Memory Book, “seeped into my childhood before I could read a history book”. Some of the atmosphere of his native town of Callan in Co Kilkenny, as he recreates it, will be familiar to readers of his terrific novel The Big Chapel. He evokes its history as a Norman creation and its continued existence as a part of an Anglicised Ireland. Kilroy uses this story of the anomalous town to set himself apart from the romantic nationalist tradition in which the west of Ireland is the landscape of truth.

He “had to face the life of a small Irish town with its alternative history of conquest and anglicisation, its awkward collisions with the modern. While I came to love the older Ireland, I think I was also aware at an early age that I was imaginatively drawn to that more awkward, urban process by which the country was growing into something new”.

As a memoirist, Kilroy writes with the brilliant economy honed by the exigencies of drama.

“My father was the local police sergeant. Like many policemen, he had a complex relationship with those who broke the law, a kind of intimacy, I suppose, out of a shared interest in transgression.” He is startlingly vivid on the physical and sensory realities of Irish small town life in the 1940s, some of them almost mediaeval: without indoor plumbing, business was done in a latrine at the back of the house and the results carried away by a man on a cart, “a figure out of a Dickensian nightmare, carrying away the waste from behind the terrace”.

He captures aspects of the society, from “the elasticity of Catholic morality” to the naive pro-German attitudes that led to fighting on the streets when local men serving in the British army and the Royal Navy were home on leave. But the book is nonetheless rightly billed as a “memory book” rather than a memoir.

In The Theatre of Thomas Kilroy, his comprehensive, engaging and consistently illuminating overview of Kilroy’s 10 plays, José Lanters notes John Devitt’s description of the shock of Mr Roche in 1968: it “dealt with things everybody knew about and nobody had previously exhibited in the theatre” – in this case the Irish male anxiety about homosexuality. It is striking that Lanters also notes Kilroy in 1997 saying that he “did not know where the gay thing came out of”. Perhaps this is one of the memories recovered after the operation, for in Over the Backyard Wall, he gives a fascinating account of how and why he replaced a female prostitute in his early drafts with a gay man.

The book goes little further chronologically than that play and it is not a conventional memoir. Over the Backyard Wall is certainly a kind of autobiography but also, as Kilroy puts it, “a book about a writer in his eighties playing with those memories and trying to see how this past might become usable in writing”.

We do encounter Tommy, as he was known in the town, growing up during the second World War in Callan, “a weedy picture of childhood, bespectacled and freckled”. But Kilroy’s search is not for the past in itself but for the past that remains artistically usable. He is always here not so much painting a portrait of the artist as a young man as summoning on to the page a Cubist image of the young man as an emerging artist.

It may have helped that Kilroy came to know two remarkable local artistic figures: the wonderful painter Tony O’Malley who was from the town (his father and Kilroy’s father were friends) and the great essayist Hubert Butler from nearby Bennettsbridge. He writes superbly here of both of them and it is especially intriguing that he credits Butler with giving him a sense that “history is something that exists in the present tense, entwined in the contemporary narrative”, a perception that is so much at the heart of Kilroy’s own art. As Lanters shows so well, this intertwining of the real and the invented, of history and the contemporary, is everywhere in Kilroy’s work.

And Over the Backyard Wall is no exception. It certainly has enormous value as a record of Ireland from the 1940s to the premiere of Mr Roche. But in the manner of a Kilroy play, it mixes realism with imaginative experiment. He has never been one to merely accept given forms and here we have a kind of exploded memoir that moves between his vivid memories of his father’s and mother’s lives, a fascinating recounting of his father’s IRA career and the early years of the Garda Síochána, based on a memoir written by his father himself, extracts from an unfilmed screenplay, a description of his father’s gambling addiction, a superb account of seeing Éamon de Valera speak in Callan in 1948 (and the bitter political division between his parents), long fictional interludes re-imagining the siege of Callan by Oliver Cromwell’s forces in 1650 and evoking the German families who came to live in the town after the second World War, with great accounts of Kilkenny hurling culture, the remarkably cosmopolitan theatre of Anew McMaster and of Dublin in the 50s and 60s, and the idiocies of censorship (Kilroy was fortunate to have a brother who was a customs officer and thus had access to all the banned books).

There is all the time an emerging sense of how the loss of religious faith is made up by the growth of Kilroy’s artistic sensibility in the company of friends like Mary Lavin (again brilliantly evoked here), Ben Kiely and Tom McIntyre. One especially memorable vignette has Saul Bellow throwing up in the toilets in Trinity College while assuring Kilroy that, as a member of the Booker Prize jury in 1971, he had voted for The Big Chapel. But as Lanters points out at the beginning of her study, and in her subtitle, the consistent theme of Kilroy’s plays is “the rejection of absolutism and certainty in favour of provisionality and doubt”.

The claims of memory here are never absolute and the past always seems intriguingly provisional. And yet it is evoked with such vibrancy and fixed with such keen intelligence that we can but hope for a second volume in which the fractured story continues.
Fintan O’Toole’s latest book is Heroic Failure: Brexit and the Politics of Pain (Head of Zeus)