Other predictions: Peter Casey to walk naked down O'Connell Street and the UK will postpone Brexit and take a gap year 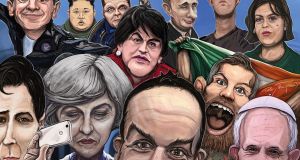 Using a sophisticated news prediction algorithm that is too complicated to explain here, Ireland’s number-one news publication, Waterford Whispers News, gives its predictions for the new year ahead:

The UK will postpone Brexit, instead deciding to take a year out and go travelling in the hopes of finding itself.

The GAA will bring in a raft of new rule changes yet again. One proposed rule to replace matches with 30-man brawls will prove oddly popular.

In 2019, Ireland will continue to emerge as a diverse nation with people of all backgrounds inhabiting the island, and this will seriously piss off a lot of people in internet comment sections.

Brexit will truly mean Brexit, and we’ll be able to hear their screams from across the Irish Sea. The first Brexit refugees will begin arriving shortly afterwards to the east coast of Ireland in their droves.

Ireland will once again be knocked out at the quarter-final stage of a Rugby World Cup, barely giving anyone time to hop aboard the bandwagon at the last minute.

Government Ministers will continue to suffer from Chronic Fingerinearism which will make it harder for them to hear dire warnings about impending financial crashes. As a result, Fine Gael will rise and rise in the polls. Wait, hang on, that can’t be right?

The longest ongoing missing persons search in Ireland will be called to a halt in 2019, with emotional rescue workers confirming that they cannot find any trace of a viable opposition party in Ireland.

Peter Casey will walk bollock-naked down O’Connell Street. Enraptured crowds of pale, angry faces will cheer loudly and claim that he wore an impeccable suit despite what their eyes have seen. The media will be on hand to report on the many people who saw him wear a suit, how we shouldn’t judge them and instead seek to understand them and their concerns.

In a case of pronounced déjà vu, myriad scandals will hit the headlines regarding gross negligence in State bodies entrusted with safeguarding incredibly important components of Irish society. However, the public will simultaneously be diagnosed with amnesia and a short attention span, forgetting to mobilise and demand change after being distracted by a viral video of a man with a tin whistle up his nose playing Amhrán na bhFiann.

A record number of women will be elected in the 2019 local elections, solving everything.
Waterford Whispers News 2018, published by Gill Books, is priced at €16.99 and available in all bookshops and online now