Notes suggest Settings, xiii is an oblique response to the ‘Death on the Rock’ killings 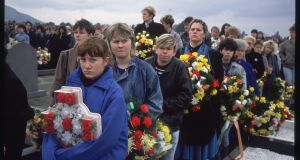 Among the correspondence that Seamus Heaney archived at Emory University, Atlanta, there is evidence that Settings, xiii, one of the poems in his collection Seeing Things (1991), is an oblique response to the killing of three Provisional IRA members in Gibraltar in 1988. In the same file of correspondence there is evidence of Heaney’s tangential involvement in the publication of two republican poetry pamphlets, one by Bobby Sands and one by Jack Mitchell.

Settings, xiii has, hitherto, not been associated with the Troubles, but lines from the poem that Heaney sketched on the back of a piece of paper that he eventually filed in a folder of correspondence from January 1989 suggest this context. The page is in a file in which three linked documents are kept: a long protest poem about the Death on the Rock killings that Heaney had been sent in January 1989; a letter from the poem’s sender, Niall Farrell; and a draft of Heaney’s careful response to both the letter and the poem.

Niall Farrell, who sent the poem to Heaney, is the brother of Mairéad Farrell. She, along with two other members of the Provisional IRA, was killed on March 6th, 1988 by British troops in Gibraltar in an incident that became known as the Death on the Rock killings. (This name comes from the title of a controversial Thames TV documentary about the incident which aired in April 1988.) The three, who were almost certainly scouting in advance of a car bombing at the time, were unarmed at the time they were killed. Nevertheless, the inquest that September decided by a nine-to-two majority that the soldiers’ use of force was not excessive, and that the killings were lawful.

The lines Heaney wrote waver in and out of legibility, but some of the words are clear enough, including:

a gorged cormorant on the rock
????? at noon
Exiled and in tune with the big glitter.

A clue as to the approximate date that Heaney probably wrote these words can be found on the draft letter that he wrote to Niall Farrell, which is dated January 17th, 1989. Heaney’s papers are peppered with notes-to-self like the above, records of times when he, while busy working on something else, caught a glimpse of a promising handful of words, and scribbled down a few lines.

The poem in which they eventually appeared, one of the 12-line works in the Squarings section of Seeing Things, is the first in the Settings subsection of this long sequence. As such, it does much to give this subsection its tone, communicating simultaneous impressions of both brilliancy and secrecy. The first six lines of this poem focus on a kitchen in a house near the sea. Though the poem’s numerical title does not give anything away about its location, from the clues of ‘whitewashed suntraps’ and ‘hedges hot as chimneys’, it seems the poem it is set somewhere that is a lot like the poet’s childhood farmhouse, but much hotter and nearer the sea. The next three lines continue the poem’s maritime theme:

Desire within its moat, dozing at ease –
Like a gorged cormorant on the rock at noon,
Exiled and in tune with the big glitter.

The poem, like much of the Squarings sequence, is honeycombed with references to light and water, and these elements give it, for all its slabs and slates, a certain disembodied airiness. The reader might wonder whether Heaney is remembering visits to Spain or the Basque country, as the poems he set there, too, vividly evoke punishing heat. The poem shares other features with Heaney’s earlier works set in these hot places: it communicates a sense of torpor and a deep but unspecific unease, as if something latent and sinister were basking in the sun. Although earlier critics who wrote about Settings xiii sensed its oppressive, troubled atmosphere, no one has hitherto connected the poem to the Death on the Rock killings.

Against the backdrop of the pages among which they were first written, however, the words ‘Like a gorged cormorant on the rock at noon’ take on new meanings. With this discovery, a new significance for the words ‘the rock’, a nickname for the Crown Colony of Gibraltar, swims into view. The hot climate in which the poem is set and the ‘big glitter’ could indicate the Mediterranean, while the fact that the ‘suntraps’ are ‘whitewashed’ suggests both the appearance of southern Europe and the concealment of incriminating facts. Reading this poem again in the light of the file of documents in which draft lines from it can be found, several of its elements seem to indicate an ambush in the offing, including the references to ‘silence’, ‘stealth’, something ‘athletic’ on rooftops and, above all, the cormorant – the swift, dark, hook-billed predator known proverbially to anglers as ‘The Black Death’.

There is, of course, a limit to what the context can tell us about the poem. The reference to exile, for example, is not readily explicable in the light of the context in which the lines were most likely written. Rather, Heaney’s poem seems to offer an oblique, imagist response to the bloody events in Gibraltar. This reading of the poem gives us an insight into a sequence and a volume, Squarings in Seeing Things, which are not noted for their relevance to contemporary events.

Heaney’s draft reply to Farrell is of further interest, as it shows his tangential involvement in the publication of two republican volumes: GiB: A Modest Exposure (1990) by Jack Mitchell, and Prison Poems (1981) by the Provisional IRA hunger striker Bobby Sands. In his draft reply to Farrell’s letter, Heaney gently parried Farrell’s request that he endorse the long poem GiB. However, Heaney praised GiB for its zest, energy and the way it approached its terrible subject with a combination of ferocity and elegance. He also gave advice on how it might be published, stating that he would advise, as he had in the case of Sands’s Prison Poems, that it be published in both Britain and Ireland. The reason he gave for this was that the poem would have a greater impact if it did not look like propaganda for any cause. (Sands’s poems were, in spite of Heaney’s advice, posthumously published by Sinn Féin’s publicity department.)

Seamus Heaney Disputed, a blog post by the former Sinn Féin publicity director Danny Morrison, contains an account of how Heaney may have supplied his suggestion. In this post, Morrison recollects meeting Heaney on a train, and Heaney’s agreeing to read the poetry of Bobby Sands which was later published as Prison Poems. Morrison further remembers that he sent Heaney the poems, and that Heaney brought them back to the Sinn Féin offices a week or two later with ‘a message for me in which he said that the trilogy “The Crime of Castlereagh” read like or was derivative of Wilde’s “The Ballad of Reading Gaol”’. Morrison says that was the extent of his contact with the poet. Heaney’s account of meeting Morrison in his poem The Flight Path (The Spirit Level, 1996), and subsequently in the 2008 collection of interviews, Stepping Stones, indicates a much more terse engagement. In the poem, Heaney recalls rebuffing a request from a republican that he ‘write / Something for us’. Years later, he identified his interlocutor in this poem as Morrison.

The letter Heaney wrote to Farrell, however, goes some way to corroborating the claims that Morrison makes. Heaney never publicly stated that he had been in any way involved in the publication of Sands’s poetry, nor that he had given any advice on the publication of GiB. Perhaps it would be fair to conclude that, although Heaney was resolute in not promoting violence, and although he never endorsed the actions of the Provisional IRA, he was at certain times during the terrible period in which he wrote willing to be involved, at least at arm’s length, with the poetic productions of those who did.
Dr Adam Hanna is lecturer in Irish literature at University College Cork. He is writing a book on the intersections between Irish poetry and law. This piece is adapted from one in the most recent edition of Notes and Queries, N&Q cclxiii (2018)