Alana Harris’s work reminds us how intellectually insular Ireland was, even in the 1960s 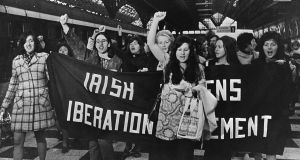 Women on the platfrom of Connolly Station, Dublin in 1971 prior to bording the Belfast Train to buy contraceptives, which were illegal in the Republic in the 1970s and 1980s. Photograph: The Irish Times

Reading this book today is like opening a time capsule buried in the foundations of a building past its prime that is being demolished to make way for a state-of-the-art replacement. And yet, this book is more than a mere historical curiosity: its insights, and its breathtakingly wide access to key records, are potent reminders not only of the value of the pre-digital historical record but of the fact that Catholicism, like any institution, is semper reformanda.

Its price will deter many, but all libraries in this country should acquire it, and the public should insist on it. It could be shelved beside David Lodge’s lightly coded novel The British Museum is Falling Down (1968), which deals with the travails of a young married couple whose membership of the Carthaginian Monolithic Church requires them, among other things, to avoid the use of the rear-view mirror in their car, because of their church’s teaching that it was against the natural law to look backwards while travelling forwards.

This rear-view mirror of a book is a work of exceptional significance and clarity. The breadth and depth of its subject matter, in particular, is a timely reminder of how intellectually insular Ireland, was even in the late 1960s, and how long it took the tide of change to reach our shores. Indeed, in the period between the end of the Council in 1965 and the encyclical some two years later, controversies about Catholicism in this country largely centred on more homegrown issues: ecumenism (the rarity of), the use of English in the liturgy, and mixed marriages.

The controversy that erupted in 1968 had deep taproots. Even in Ireland, the problems were flagged in advance, after a fashion, in A.J. Humpheys’ New Dubliners (1966), some of the research for which was carried out in the 1940s! This reflects the extraordinary quality of the research displayed by the contributors, recording not only the ground-breaking creativity at all levels of the Catholic church in countries like the Netherlands, Germany and Belgium, but also the conflicted attitudes under Communist rule in Eastern Europe, and not forgetting the deep insularity of the offshore archipelago of which we were, perforce, a cultural and theological part.

There are rich historical seams here, and they are explored in satisfying breadth and depth by a wide variety of authors. There is important new research in every chapter, and the passage of years since the events described here has, if anything, added to the contemporary relevance of the contributions.

The Irish chapter, by Peter Murray, is a vital and superbly detailed addition to the historiography of this period. The fact that he deals with both parts of this divided island adds to its value – and highlights, inter alia, the courage, and the political skill, of the late Paddy Devlin, who introduced free family planning in Northern Ireland while skilfully avoiding the need to consult the full Northern Ireland executive (or, one assumes, the Catholic Church authorities). He also carefully disentangles, among many other topics, the complexity of the Fr. Good affair in Cork.

His extraordinarily thorough and perceptive analysis underplays, I think, the possible tactical distinction between Archbishop McQuaid and Cardinal Conway on this issue in the early 1970s.There is, unfortunately, little or no public evidence of this but, reading between the lines (as some members of the clergy had no hesitation in doing, for my attention, in private at the time) it is clear that Conway had moved Catholic opposition to liberalisation of the law some distance away from narrow theological grounds and towards sociology – the “slippery slope” theory. This, of course, carried its own risks.

Sociology, however, took second place to old-time rhetoric in McQuaid’s warning that unsuccessful attempts by Mary Robinson, myself, and Trevor West in the Seanad in the early 1970s to change the 1935 legislation would be, and would remain, “a curse upon our country”. Had he known then how long it would take both the courts and the legislature to change the law to any appreciable extent he might have been less alarmed by our initiative.

Looking back at it all now, it is arguable that the hierarchy’s attempt to stem the tide of change in this area may well have been related to their fears about the growing secularisation of marriage itself and indeed of Irish society as a whole. This had been evidenced even earlier by the refusal of the State in the 1950s to agree with them when they tried but failed to prevent legislative changes increasing the minimum age of marriage.

The great value of this book, and of its discussion of Ireland in particular, is the way in which it reminds us that Catholic teaching and practice, as happened earlier on topics as diverse as slavery, usury and – most recently – capital punishment, will continually be challenged, refined, and changed or even quietly abandoned in response to new insights, and will (with luck and good leadership) respond more accurately to the need to offer significance and relevance in our uncharted future. It is better that enlightenment should come late than that it should not come at all.