The Irish brigade in the Pope’s army

In 1860, Irish volunteers went to defend the pope from Garibaldi, hero of British and Irish Protestants 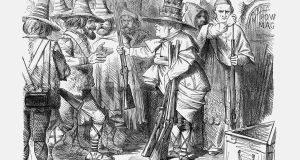 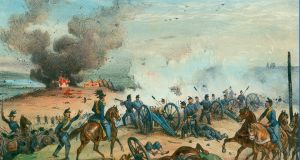 As a child I was fascinated with two war medals that my great grandfather Patrick Kennedy received for fighting for Pope Pius IX in 1860. As I grew older I thought about the Irish brigade which went to Italy. Who were they? Why did they go? What happened when they got there? How did they come back and what happened to them afterwards? Over the years I gathered information, compiled a list of those who went, and visited the battlefields and other places connected with the 1860 war. This is an outline of their story.

To begin, some historical background. Nationalism was the most potent force for political change in the years before 1860. In Ireland Daniel O’Connell had agitated for self-government. But after the Famine the political priority changed to land reform. The French ousted the restored monarchy and elected Louis Napoleon who declared himself Emperor Napoleon III. The Italian Risorgimento (Resurrection of Italy) generated new nationalist and republican thinking. Giuseppe Mazzini had huge influence outside his native country. New nation states like Greece and Belgium emerged. Germany was still fragmented into many independent states. The movement to unite Italy faced a major obstacle. The Papal States stretched across the middle of Italy, separating north and south. Under threat, the pope called for help. An Irish brigade was recruited by priests. It went to Italy to defend the pope from his enemy, the anti-clerical republican Giuseppe Garibaldi, hero of British and Irish Protestants, who believed the downfall of the pope would lead to the conversion of Italy to Protestantism.

After Catholic Emancipation, Irish Catholics were organised into a deeply religious and conservative church under Archbishop Paul Cullen.

In 1859 Piedmont kick-started the unification of Italy under its King Victor Emmanuel II. Italy was divided between Piedmont and Austrian Venetia in the north, Tuscany, Parma, Modena in the centre, the Papal States, and the kingdom of Naples and Sicily. After the central states were peacefully annexed by Piedmont, Pope Pius IX called on Catholics to defend him.

Garibaldi invaded Sicily and the Italian mainland. Irish-born Austrian army officers started recruitment along with bishops and Alexander M Sullivan, editor of the Nation newspaper. Recruitment committees and priests selected recruits. Most were artisans, farmers, clerks, teachers, students, former British soldiers and policemen. Few had military experience. Religious impulses, thirst for adventure, escape from dead-end jobs, and the opportunity to travel impelled them towards Italy. Some were simply up for a fight.

Getting to Italy was easy. They travelled by rail and cross-channel steamers to Britain, Belgium and France and onwards by rail/boat to Italy. The cost was a little over £13. The trip was a great experience, as many had never ventured far from their own localities.

The papal army rapidly expanded under French General Cristoforo Lamoricière. Recruits from Austria, France, Belgium, Germany and Switzerland doubled its size to over 20,000. The Irish added 1,300, becoming known as the Irish brigade at home and St Patrick’s battalion of the papal army in Italy. The Pope’s army was poorly organised. French professional soldiers formed its high command. Officers and NCOs were lacking and Italian papal soldiers unreliable. Harsh military discipline and training separated out the unfit to serve, sick and disillusioned. About 300 returned to Ireland.

By September the race for Rome was on. Garibaldi demanded an Italian republic. Piedmont chief minister Camillo Cavour checkmated him. Garibaldi took Naples, Cavour invaded the Papal States with his formidable army. Lamoricière placed a line of garrisons across Italy to repel them.

The papal field army was routed at Castelfidardo when Lamoricière was cut off en route to Ancona. The 105 Irish were mentioned favourably by the Piedmontese.

Piedmont’s soldiers surrounded Ancona and its navy bombarded it. After a week’s siege Lamoricière capitulated. More than 400 Irish fought there along with other foreign and Italian soldiers. After the conflict the brigade was imprisoned in Genoa.

Foreign papal prisoners were repatriated by their governments, but the British refused to help the Irish. They offered transport to Malta, hoping the men would enlist to fight in the Opium War in China. Eventually the brigade returned via Marseilles, Paris and Le Havre, arriving at Monkstown near Cork. They received a heroes’ welcome.

Piedmont annexed the Papal States except Rome and its environs, which remained protected by Napoleon III’s French garrison. Garibaldi ceded Naples and Sicily to Victor Emmanuel II, sacrificing his republican principles in the interest of Italian unity. Victor Emmanuel II was crowned king of Italy. Pius IX held out in Rome for another decade before being isolated in the Vatican.

In 1860 Irish Catholics stood by Pope Pius IX in his hour of need. They offered prayers, contributed money and put their lives on the line. After the war Patrick Kennedy married, raised a family and joined the Fenians.
Donal Corcoran holds a PhD in history from UCC. His new book The Irish brigade in the Pope’s army 1860 will be published on August 31st  by Four Courts Press