18 British soldiers died in the Narrow Water bomb, 39 years ago today. How did it affect the killers? 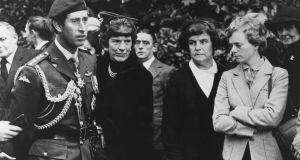 Prince Charles, colonel-in-chief of the parachute regiment. attends a memorial service in Aldershot for the soldiers killed by the IRA ambush at Warrenpoint in 1979. Photograph: Central Press/Hulton Archive/Getty Images

In 1979, on August 27th, 18 British soldiers were killed in a bombing at Narrow Water, near Warrenpoint, Co Down, a few miles from where my family lived. I don’t remember this incident.

Most of the press attention at the time went to another IRA act of violence that had taken place on the same day: the bombing of a boat in Mullaghmore, Sligo, which killed Lord Mountbatten and three others. I do remember this event being on the news: in terms of media attention the deaths of the soldiers had been completely overshadowed by the death of a British royal.

The massacre at Narrow Water forms the backdrop to my play, The Naturalists, which is about to receive its world premiere in New York, presented by the Pond Theatre Company.

According to Tim Pat Coogan, the Narrow Water bombings were pivotal in Irish-British relations as the event which instigated the British policy of “Ulsterisation” (after the earlier US policy of “Vietnamisation”), whereupon the RUC would be given more powers to deal “in house” with the security threat. The purpose of this was so that the British public would stop asking of their government sticky questions such as “why are we in the North of Ireland in the first place?” and so the problem could be passed back to the North and effectively to the island of Ireland, becoming well and truly “the Irish problem”.

The process of Ulsterisation – keeping the problems of the North in the North – seems to have continued until recently. Even today, with regards the current debacle in Northern Ireland about abortion, an issue now out of kilter with the South (after the recent successful Yes vote in the Republic), the instinct of Westminster is to keep the matter contained within the powder keg of the North, a way, perhaps, of continuing to appear “hands off”, while in reality operating a form of (convenient) socio-political quarantine.

In The Naturalists, the central character Francis is a former bombmaker. He is the “mastermind” behind the Narrow Water bombings – and is an entirely fictional character, as no one, in fact, was ever charged for this crime. In Francis, I wanted to create a character with a past that was problematic. I wanted the character to have done something so dark that he could barely forgive himself for it – mainly, because I wanted to see how a broken human being can come back to a moral stature of some kind, be able to reset his moral compass. I also wanted to examine what such a crime does to the immediate family of the perpetrator (and not the victim – or victims – in this instance) – and how, through the forces of nature and love, he and his brother Billy find their way back to some semblance of normality.

All the characters in the play are emotionally disfigured in some way, and all, via the lush environment in which the play is set, find a way towards harmony. The harmony they find is not religious – but something that awakens within them, is in tune with nature, whereby the three main characters, Billy, Josie and Francis, eventually develop a healing relationship “where all is shared”.

In The Naturalists Francis and Billy are able to move on from the past, in which they have been moored for years, via their growing friendship with the mysterious Josie, a woman who, like Francis, seems to have rejected modernity. In the brothers’ difficulties Josie herself finds a renewed sense of purpose. At the end of the piece, Francis finds a way to eventually embrace the spirits of the 18 soldiers he killed via the 18 trees he plans to plant.

The play was first read at the Flat Lake Festival in 2010, directed by Padraic McIntyre of Livin’ Dred Theatre Company. At that reading I overheard someone (who had been invited to the reading as he may have been important to the future of the play etc) say, “who needs another Troubles play” – and consequently I stuck the play in a drawer where it remained for five years.

I don’t think The Naturalists is a Troubles play, specifically, in that the Narrow Water incident happened years before my story begins. (Though I have no problem with so-called Troubles plays; if you lived on the Irish Border as I have done at quite a specific time in recent history, what are you supposed to do, close your eyes?)

In 2014 I took the play out of the drawer and it was read at the Clapham Omnibus Theatre in London, directed by Robyn Winfield-Smyth and starring Ruairi Connaughton as Francis. It was a beautiful reading. It has since been read again in Manchester, and Pond Theatre Company in New York is to stage the world premiere of The Naturalists in September. In the spirit of the play, the directing is shared between two women, Lily Dorment and Colleen Clinton.
The Naturalists previews from September 7th and runs until September 23rd at Walkerspace, 46 Walker Street, New York