Stories of life in direct provision, the history of Ireland and a deadly sting 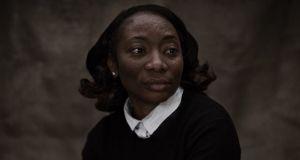 A writer that should be read in Ireland, 2018. Born in Nigeria, Okorie came here in 2006, and was inspired to write after nine years in the direct provision system. These three small stories – each distinctive in subject and style – give a genuine face to abstract, emotive ideas: immigration, race, culture, fear, integration, opportunity, hostility, and leaving a home.

Liam Thornton, an expert in human rights laws based at UCD, says there are more than 5,000 men, women, and children in direct provision centres, in his useful contextual piece at the end of this book. Thornton is “reminded of the Ireland of the borstal, Magdalene laundry, the mental institution”. As citizens, we should feel similar shame. Jim Larkin was an immigrant; James Connolly, too.

Cold statistics can be presented ad nauseam on the institutionalisation of people coming to Ireland for a better life. We need to hear the voices of these women and men, to find the warmth of their undoubted humanity. We must also give them a chance to speak, so bravo, Skein Press. NJ McGarrigle

General readers and scholars looking for introductory overviews of Irish history have often been reliant on larger, now slightly out-dated volumes. FSL Lyons’s Ireland Since the Famine (1971), or Roy Foster’s Modern Ireland, 1600-1972 (1988), are staples. In a year of large-scale Irish historical publishing projects, such as the mammoth Atlas of the Irish Revolution (2017), or the new four-volume The Cambridge History of Ireland (2018), covering the years 600 to the present day, John Gibney’s A Short History of Ireland, 1500-2000 stands out for its brevity, but also for its accessibility. Although the pre-1500 period is not covered in detail, the author’s eye casts back as early as the 12th century for context. Shy of 300 pages, and with a retail price of under €25, Gibney’s volume not only proceeds up until virtually the present, but it also covers many historiographical controversies along the way, making it a solid introduction not only to the key events and themes of Irish history, but also to the processes of that history, too. Seán Hewitt

On a Pacific island at the end of the 19th century, the Peacock children spy a ship. Robinson Crusoe meets an intense family struggle in a novel both expansive and intimate. “It is good to settle,” said Ma. “But sometimes it’s better to move on.” Lizzie Peacock and her family have been moving on all their lives, bringing little with them other than their name. Their existence is precarious and lonely until the arrival of Polynesian kanaka, islanders in search of freedom and wealth, to work for their father.

History lives in the spoilt cargo of a boat, the hunted bodies of rats, the vastness of a globe navigated only by sea. It’s an era of exploitation and barbarism, when the world map is in flux. Amidst this, is a family at war. When Albert Peacock goes missing, sinister secrets emerge about the island and about Lizzie’s father, whose cruel, controlling nature has been obscured by her fierce devotion. The Peacock children have a choice: to accept their father’s yoke, or to overthrow him. A beautiful and perceptive adventure. Ruth McKee

The Necessary Marriage by Elisa Lodato

Sixteen-year-old Jane begins to see her history teacher, Leonard Campbell, through a gaze of sexual interest and this takes her on a path to adulthood: “She knew that she had gone beyond the initial interest her classmates had shown when he first walked into the room and wrote his name on the board.” Before long they have broken the rules and fallen in love. Now, many years later, Jane is wondering if marrying a man 23 years her senior was the right decision. Has she missed out on the best years of her life? When Marion and Andrew move in next door, Jane’s life tips on its axis and her family life is about to alter. Following a marriage from its foundation, this is a captivating novel which gets to the core of lust, love and commitment. Lodato’s writing is delicate, yet direct. Teenage Jane is embraced by her love of literature and her lust for Leonard; adult Jane is consumed by her daughter and restrained by her marriage. An excellent examination of rash decisions and their consequences. Margaret Madden

Shannon Fowler’s fiance Sean was killed by a box jellyfish sting while they were on holidays in Thailand (there were no warnings of highly venomous jellyfish and officials initially tried to put his death down to “drunk drowning”). This memoir of love and grief is her response to that tragedy. As a marine biologist whose grandfather was an oceanographer, a love and knowledge of the ocean was deeply ingrained in her from childhood but she couldn’t bear to be near the ocean afterwards. Instead she travelled alone to eastern Europe, in the autumn and winter, to places where English wasn’t spoken and tourists were rare. The narrative zigzags back and forth between those travels, memories of their loving relationship and flashbacks to the days immediately after Sean’s death. Her travels taught her “that real tragedies don’t need to be redeemed; they need to be remembered” and that “the world isn’t full of Hollywood happy endings”. It’s a well-written, moving and at times intensely dark account – certainly not for the faint-hearted. Brian Maye

The author considers Swift a man of contradictions: “warm humour and bitter gloom”, “shocking coarseness and deep Christian faith,” considerable moral courage but couldn’t be truthful to the women he loved. He wanted to make the world a better place and the pen was his weapon – he was an ingenious writer and a master satirist. This beautifully produced book offers extracts from his works in chronological order. Most of his sermons as dean of St Patrick’s in Dublin have been lost, which is a pity if the extract included here from On Sleeping in Church is any guide to their quality. Much comic verse is included, such as Phyllis, or the Progress of Love, some of it scatological, especially The Lady’s Dressing Room. Swift’s enigmatic relationships with “Stella” and “Vanessa” are considered. His Stella writings are generally playful, sometimes ambiguous but always affectionate. Extracts from the great Gulliver’s Travels feature, as do parts of A Modest Proposal and much more. For fans of Swift – and surely there are many – this is a welcome publication. Brian Maye