The story of one man’s cut-throat path to literary stardom, starts impressively but then loses its way 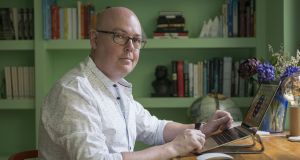 Book Title:
A Ladder to the Sky

In Christopher Marlowe’s Tamburlaine the Great, the title character, who is given the epithet “the scourge of God”, brutalises and battles his way across countries, taking prisoners and slaves, raping and murdering as he goes. “Nature,” he tells us, “doth teach us all to have aspiring minds”. In John Boyne’s latest novel, A Ladder to the Sky, we follow another “aspiring mind”, Maurice Swift, and though he may not be Tamburlaine, he becomes brutal and terrifying in the midst of his ambition.

When we first meet Maurice, we see him through the eyes of Erich Ackerman, a Cambridge academic and novelist who, after years of being overlooked by the literary world, is experiencing a moment of high acclaim after the publication of his latest prize-winning novel. Maurice, a young Yorkshireman working in a Berlin hotel, is handsome, clever and, most of all, ambitious. Taking advantage of the older man’s clear attraction to him, Maurice, an aspiring writer himself, agrees to be his assistant. Over the course of the novel’s opening section, we find him parleying his increasingly-arrogant sexuality for the patronage of a series of older men. Climbing the “ladder to the sky” of the title, this is a story of Maurice’s deadly ambition and manipulation, his cut-throat path to literary stardom.

A Ladder to the Sky is split into three main sections, the first of which is by far the most effective and affecting. Moving between Berlin, Copenhagen, Rome and Madrid, we slowly hear, as recounted to Maurice, the tale of Erich’s past in Nazi Germany – his involvement with the administration, his first experience of love in the form of his friend, Oskar Gött, and the brutal repercussions of his uncontrolled envy. Here, Boyne seems to be in his element. The queer narrative is handled with aching sensitivity. The way shame runs through the narrative, and the tortuous reading of signs and social cues on Erich’s part, all combine to make a forceful and guilt-ridden tale. Likewise, Boyne’s clear authority on historical detail in this period, put to such effect in his previous novels, shines through, and gives a convincingly-researched air of believability to the story.

As the plot continues, however, Boyne’s conceits start to fall apart, and none of the subsequent sections live up to the scope and detail of the first. In The Tribesman, the novel’s middle part, the narrative shifts: now we are hearing from Maurice’s wife, a debut novelist and newly a lecturer at the University of East Anglia. It transpires that, in the intervening decades, Maurice has stumbled into relative obscurity, his novels now overshadowed by his wife’s success. The problem here is not that the plot becomes difficult to believe (though it certainly steps up a gear); it is that the conceit of the narrative has become contrived.

Maurice’s wife addresses him throughout, explaining things to him that surely he wouldn’t need to be told (“you were only 24 when you published your first novel”), and we are given clunky information about previous characters (“he died alone in Berlin”), all of which is for the benefit of the reader, not Maurice. This conceit reaches fever-pitch, and loses the reader, with a narrative twist almost as clumsy as “the narrator had been dead all along”. It would be cruel to spoil the twist, but suffice to say Boyne’s predilection for narrative devices (alternating time-frames, points of view, modes of address) is his eventual downfall.

In Alan Hollinghurst’s recent generation-spanning novel The Sparsholt Affair, which like A Ladder to the Sky, traces ambition, deceit and hidden sexuality over a large timeframe, the scope (from the second World War to the present) works because of its careful interlinking of plots, its tracing of a queer experience over a 60-year period. In Boyne’s book, the plot pushes endlessly forward and drops some narrative threads as it goes. If Hollinghurst traces generational ties and contexts, Boyne largely discards as he goes, leaving us little room to interact or piece together. The novel’s title might almost make this seem deliberate: we climb a ladder to the sky, admiring the ascent, but eventually, looking back, we find ourselves further and further from solid ground.

Are the political parties tuned in to the needs of musicians?
5