From James Connolly to democracy and fantasy 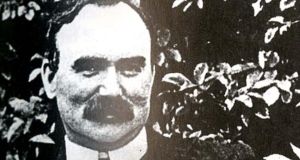 As people turn towards the ideas of Karl Marx in trying to understand the demoralising inequality that bounds our society and leaves little but rope burns of disregard, it’s timely that a new collection is published of James Connolly’s writings.

This year being the 150th birthday of Ireland’s greatest Scotsman and one of the finest thinkers and writers on socialism is fitting too, and reason enough to revisit his words. Connolly was, as editor Shaun Harkin says in his considered, extensive introduction, “an exemplary rebel” who fought injustice wherever he found it. Connolly’s writing hasn’t dated: still thundering towards its point and going for the jugular of purveyors of greed and oppression, in prose packed with power and precision.

Here he is on the women’s movement: “ . . . the working class of Ireland must cheer on the efforts of those women who, feeling on their souls and bodies the fetters of the ages, have arisen to strike them off . . .” A book that should be on school shelves, as much as those of someone who wishes for a fairer society. Essential.

The Boy who Belonged to the Sea

Translated from the French by Liedewy Hawke

A dreamy, underwater experience, this brief novel by Thériault is a hallucinogenic dive into another realm. Set on the coast of the Gulf of St Lawrence in Canada, the sea swells as both menace and magic, treachery and refuge in a story which is as much about the miracle of friendship as it is about the devastation of grief.

It tells the story of two boys, one who has lost his father and whose mother is in a deep coma, and one whose mother is dead – but who nevertheless fantasises about her continued existence in the same way as he has prophetic dreams about a world under the sea. The two boys fall into a deep friendship, united by their loneliness and longing – but from the beginning there is an ineluctable current of tragedy.

The sea is more than analogy; imagining a magical place below the waves gives the boys release from grieving, a panacea to their isolation and pain. Here is fragile poetry, charming and childlike in its simplicity, yet profound on the unfathomable depths of loss, of love.

In this clear-headed, compact, and timely book, David Runciman tackles the dreaded “D” word that’s sent a shudder through politics recently. No, not “The Donald”, but Democracy.

It’s little wonder Winston Churchill called democracy the worst system of government apart from all the others, and as you move through this considered appraisal, you can be forgiven for asking: have we really been fooled for so long, and why do we bother?

Oh, of course, the United States; democracy’s foremost proponent. But if democracy is a foundation for a civilised society, how come half of that country is incandescent about the current incumbent in the White House? Runciman, a professor of politics at Cambridge University, picks at these ideas and other arguments with gusto, and covers Turkey, India, Greece, Brexit, as well as Trump.

It’s unsettling to think that Trump makes a mockery of a system that has enabled him. Runciman thinks democracy is going through a midlife crisis, and that Trump is its motorbike. What’s it to be: crash or burn?

Self-compassion has three components: kindness towards the self you already are; an awareness of our common humanity; and mindfulness; combined they form what Padraig O’Morain calls “kindfulness”. Acceptance of what we are, good and bad, he sees as a key aspect of self-compassion and as “a gateway to change” for the better.

He warns particularly against the nefarious effects of shaming children, which tends to make them very self-critical adults. He also warns against “conditions of worth” or “sacred cows”, which can drive us to self-harmful psychological behaviour. Similarly damaging is comparing ourselves unfavourably to others; what we need instead is to take pleasure in the good fortune of others. We also need to accept that we’re not going to get everything right all the time.

O’Morain, a journalist, psychotherapist and mindfulness coach, who contributes a weekly column to this paper’s health supplement, writes clearly, simply and persuasively, illustrating his points with examples, and providing useful, practical, easy-to-follow exercises to help us achieve kindfulness.

The author is referring specifically to our bodies and how the many parts of them are badly designed and how it has taken four billion years of evolution to develop our imperfections. The human body, he claims, is one big pile of compromises. It seems we are full of design faults but extremely adept at getting around them.

We have been clever and relatively successful at handling our imperfections but (sadly) we are far from perfect. After all, it is our physical imperfections that make us human. Lents, a professor of biology, argues, for example, how we humans have head colds 200 times more often than a dog, our wrists are full of useless bones, the retinas of our eyes face backwards causing all sorts of problems, and we have poor design of the mucus drainage system to our sinuses. Why, if we’re highly evolved creatures, have we such bad knees? And so on. In other words, our evolutionary “history” is a litany of mistakes, yet it is these physical imperfections that make us human. The author takes an offbeat view of our evolution and may perhaps cause us to rethink a little.

The Beginning of the World in the Middle of the Night

Jen Campbell describes herself as “a queer woman with a deformity” and her stories give a voice to people who are different and seldom heard. “History can be very cruel about those who are different,” declares a speaker in Aunt Libby’s Coffin Hotel. Campbell favours an approach that features fantasy, magic, fairy tales, with a sprinkling of reality.

The bizarre opening story, about a man who buys the hearts of various animals and implants them in his partner, has many pertinent comments about the human heart. The title story is all about beginnings and the many possibilities of various beginnings; it’s a curious and imaginative dialogue where one of the speakers may not exist. Margaret and Mary is a mixture of New Testament, fairy tales and reality.

The standout story is Jacob, a heart-warming story of a boy who writes to a TV weather lady asking her to help him understand why his sister has changed her name and her personality. This unusual collection won’t be everyone’s cup of tea.